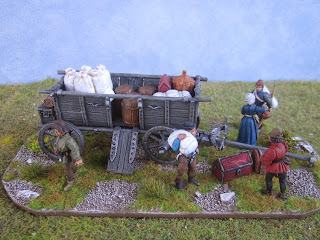 My second Perry Miniatures supply wagon; this one representing a Burgundian wagon being unloaded at an encampment. A clerk checks off the contents, whilst an Ordonnance archer accepts beer from a camp follower. 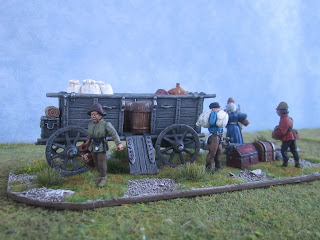 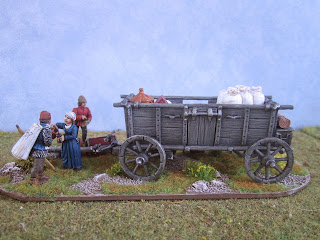 This time I got the axle up the right way. However my capacity for dodgy assembly continues, as I attached   the chest on the wrong end! Hey ho. I've created a load for the wagon on a plasticard base (using pieces from Front Rank, Fenris, Ainsty, Mirliton & Foundry), which is removable and so can be utilised on my other wagon. Also the canvas cover can be swopped over. 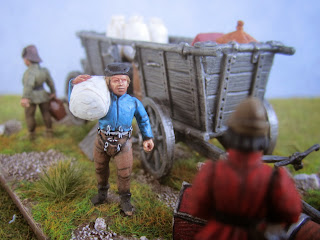 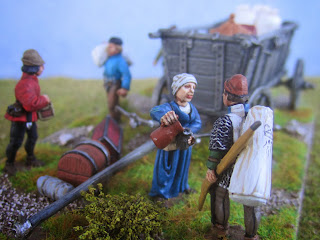 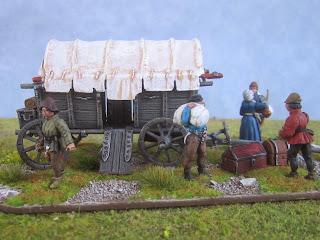 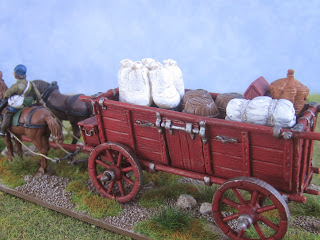 This is my last posting of the year. Looking back I realise that I've managed slightly less postings than in previous years - but I think this was due to making scenery boards and some extras for this year's Cravant game at Salute.

Looking ahead to 2014, I'm both enthused and excited. I have aspirations to get my Burgundian army to a stage of near completion. The outstanding contingents are spear-armed coustillers/second rank for all of the mounted men at arms that I've done, which will be built around the forthcoming Perry 'Light Cavalry', bearing plenty of flags, pennons and some trumpeters, etc. A unit of mounted men at arms representing Antony, Bastard of Burgundy (as he's kindly graced the blog header for so long!) and using the wonderful new Burgundian flags currently being done by Pete. Also some dismounted men at arms comprised of knights of the ducal household, using the other forthcoming Perry plastics. Plus no doubt a few vignettes, using up some of the metal figures left over from other packs.

I may also be able to make a start on the Swiss Confederation too - as I expect to wait for the new Perry plastics to the Salute show - just hope I can keep my motivation going to paint large numbers of pike and halbard troops.

Many thanks for everyone's comments over the year, they are truly appreciated. All best wishes for 2014! 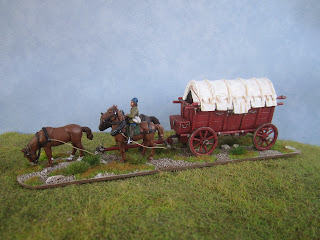 The first of a couple of supply wagons that I'm doing. Such wagons would feature in all of the duke's main battles, either where his encampment was overrun following his defeats or on the table edge supplying the Burgundian siege works. I've left off painting any Burgundian devices on the canvas cover, so that these are generic and can be used with any of my medieval armies. 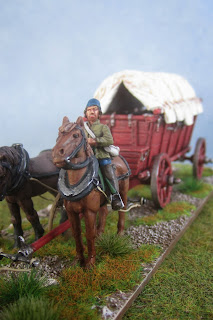 The only slight adjustment I've made to this Perrys model is to have a three horse harness arrangement. This formation is shown in late medieval and early renaissance illustrations. The trickiest part was attaching the fuse wire traces and in concentrating on this, I realised afterwards that I've glued the front axle in position upside down - too late to change anything! Lesson learnt - which won't be repeated on the next one... The cover has been left loose and not glued on, so that I can swop it with the other wagon that's underway. 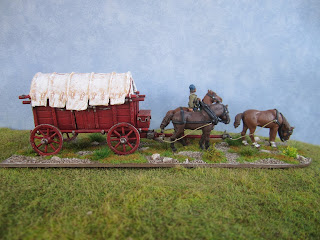 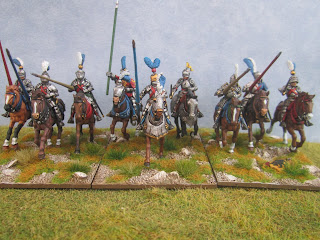 This is the fourth completed unit of men at arms to represent a Company of my Burgundian Ordonnance army.  All of these are from the Perrys plastic box. These will have a supporting rank of coustillers, carrying a few more flags and pennons; the production of which are largely dependant on the release of the Perry Miniatures 'light cavalry' plastics set (hopefully by the 'Salute' show in 2014?).  A Company flag will be added at a later date; not sure which one to represent at the moment, indeed the flagbearer figure is only currently attached with Bluetac and he may be reallocated to the second rank. 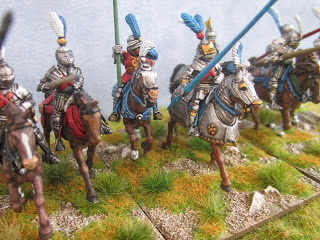 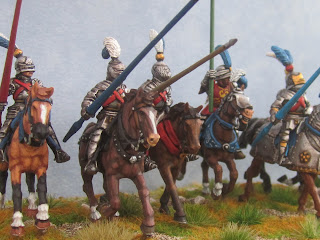 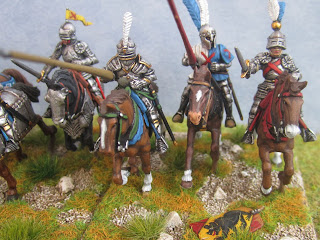 In retrospect, I'm pleased with how the addition of the plumes and cross of St Andrew have sufficiently 'burgundianised' these figures. The next mounted men at arms should be another command group, to represent the Bastard of Burgundy and I'm starting to compile some ideas and potential figures for these, but again am tempted to wait to see more Perry designs for the next plastics. In the meantime I've started on a couple of Perry waggons, for generic usage with any of my medieval figures. 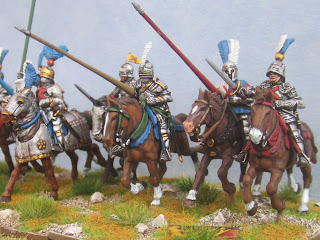 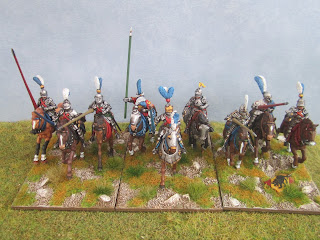 Men at arms - second base 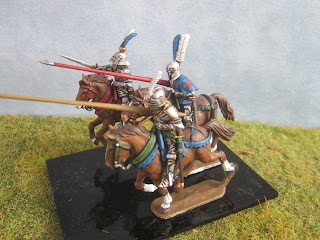 Completed the figures for the second base; a bit slower than planned as having to limit time spent painting, as it's impeding the repair of my tennis elbow. I have however managed to start off a couple of other bits.  The horses are done for the final three riders, so am hoping that this week will see them posted here - all done and dusted. 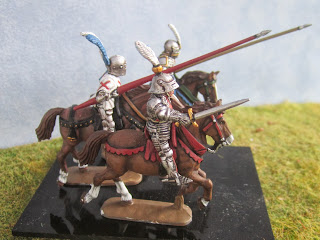 Post Script: quick picture of the flag bearer for the other base - just completed - flag to be used for this Company is still to be decided. The eagle eyed will note that the horse was the sole output from my summer hols. 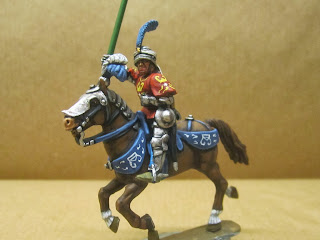 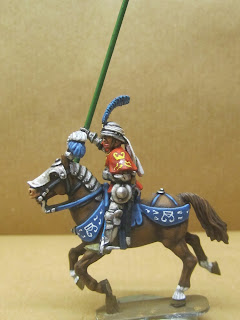 Apologies for the recent hiatus here - I have returned to the service of the duke following a brief diversion to chip away at my AWI lead pile (one of my 'second tier' collections). I needed a break from doing medievals fairly regularly in one form or another, for the past few years. So refreshed somewhat - and most definitely inspired by David Imrie's Burgundians  - and with some potential spare time on my hands between work contracts, I plan to complete another front rank of men at arms, plus hopefully some baggage wagons. 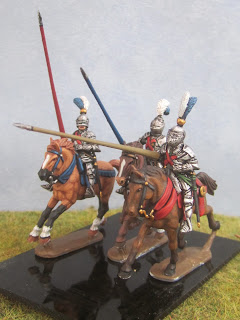 No significant conversions with these, just a few more permutations that can be done with the plastic components. Most of the horses were painted in the summer and so its only the riders that I need to spend time on. Some of them have had St Andrews cross (green stuff) and plumes (my castings) added - a couple of the horse's tack have had minor adjustments too. 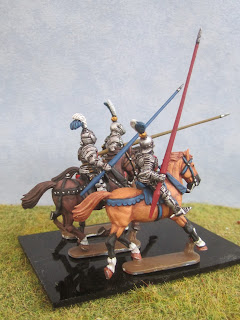 Figures for the first base are done, prior to fixing to the plastic stand, which I'll do when all nine figures are complete in case I fancy swopping any around to achieve a slightly different overall look. I also found some re-enactors as Burgundian men at arms on the internet - which is useful reference  - I believe they may be based in Russia or Ukraine? Not sure about those red and yellow plumes complying with the duke's ordinances thought!! 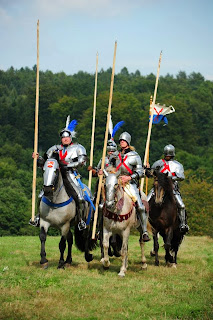 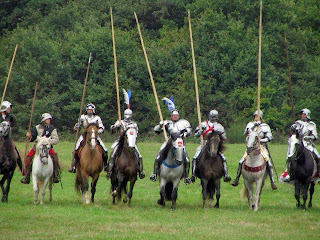 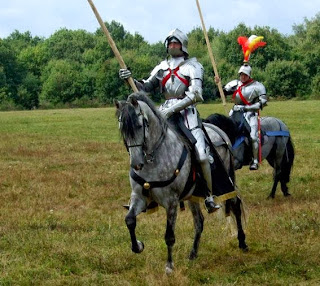