Burgundian Coustillers - on the paint bench.

I don't usually post pictures of work in progress, unless its at the ready-to-base stage, partly as the painting table is a distinctly messy place - well overdue for a deep clean.  However, since Salute my time for sitting at the painting table has been very limited, largely due to family matters which have rightly been a priority for me. 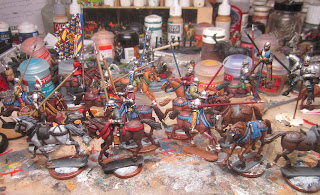 So here are some Burgundian coustillers in various states of progress - some pretty much finished and some with details to be added, as are their mounts. I don't usually start on such a big group, but I got into a creative groove in assembling them straight after Salute and so decide to try and get through a batch of fifteen of them - in total I'll need to complete nearly sixty, so quite some way to go just yet. 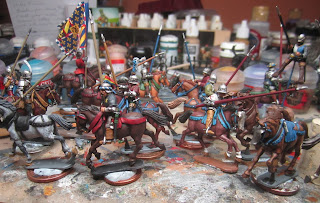 They are not attached to the horses, just perched for the moment and I'll decide how the riders match up to the horses at a later date; in fact it maybe some time before they are based, I may do quite a few before I make any decisions on basing. There will be 3 bases, of 3 figures each, per contingent to support the men at arms.

I'm likely to use the boxes of Perry's Late Medieval Light Cavalry that I have recently acquired, as coustillers for my Burgundians. This means using the arm options holding light lances/spears, perhaps with a few crossbowmen added in, so I'll have plenty of spare arms and related bits for the mounted bowmen. So I have used these to create some additional dismounted bowmen, to vary the poses of the Perry's metal longbow castings, who'll form a contingent of the duke's bodyguard. 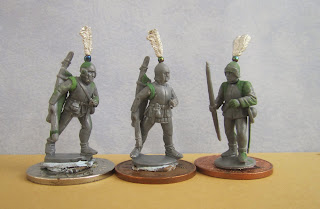 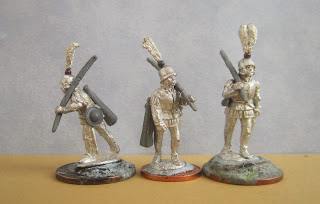 The main parts used have been the bows wrapped in covers, arrow sacks and the arms holding or carrying bows. Adding these to plastic bodies from other Perry boxes is straightforward and has only needed the addition of some straps for arrow bags from putty - which has been done to the metal billmen too. The other conversion uses a pair of couched spear arms, with mail sleeves, from the Light Cavalry sprue to create a banner/flag bearer, who'll probably end up on a vignette base - not so easy to see as I've undercoated him, but I think it works as a decent pose. 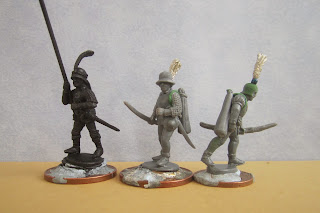 All have plumes and orbs (from small beads) added to helms, to add some gravitas to their role as ducal bodyguards and they'll all wear tabards of St Andrew's cross and steel and flames, as per the sample figures I did some time ago. The conversions will be en route to Spain soon, to be painted for me. 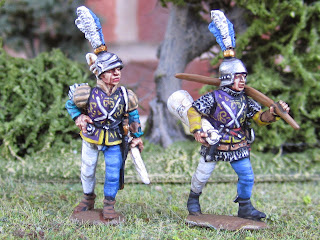