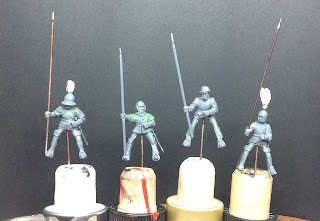 My approach, to make these figures have the appearance of Burgundian Ordonnance, revolves largely around adding cast metal plumes and some straightforward putty work (...as straightforward is the only putty work I can do!). Interestingly the image of mounted spear-armed troops by the Master WA, interpreted as a contemporary illustration of Burgundians, shows no plumes, only scarves and pennons attached to helms - but we'll conveniently disregard that image for the purposes of this post! [EDIT - see Jim Hale's comments below!]

So here's whats been done to these fellas, all of whom are Perry Miniatures Light Cavalry plastics. First figure on the left uses the brigandine and plackart body. As I'm getting lazy towards painting all those rivets, I removed them with a scalpel and smoothed with sanding stick. The right arm is one holding a sword with half-length coat sleeves over armour, which was drilled out to take a long metal spear (as a flagbearer). A coat was then built up with Green Stuff, instead of the brig. The contemporary reference for this is below; it's an usual combination of what appears to be coat over armour, with plackart over the coat. The image shows two small rondels on the chest, which could have secured the coat to the armour beneath? I've left these off my figure. 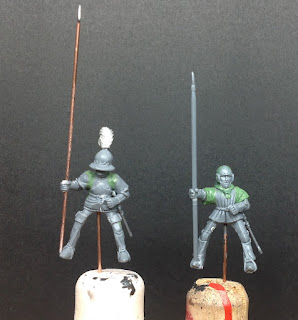 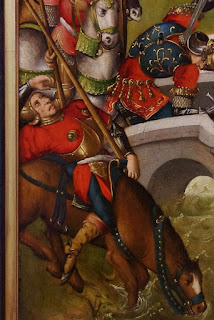 Next to him, an assembly using the arms with short brigandine sleeves. Again I smoothed off the rivets (more evidence of my lethargy!) and covered these with putty as coat sleeves. A hood, tied at the front, was added - inspired by the mounted figures in the Housebook Master engravings, which have long been one of my favourite images for reference material. I reckon I can pick out several items of dress and weapons which Michael Perry included in this box set from these images. 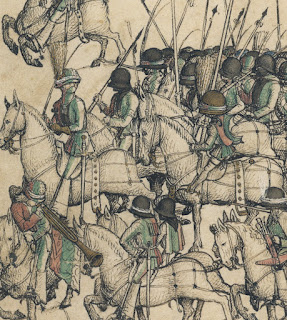 The other pair are just assemblies done with the aim of creating some combinations which I'd not done before. I have an eccentric aspiration to have every coustiller as a different looking figure, but not if I'll achieve this! Putty turned-down boots added to one figure. The flagbearer on the right is the brig and plackart body (again), this time with the chest cut-off at the waist and replaced with full breast & backplates from a figure in the Perry Foot Knights box. The right arm is a mailed sleeved longbow arm, cut away and drilled out. 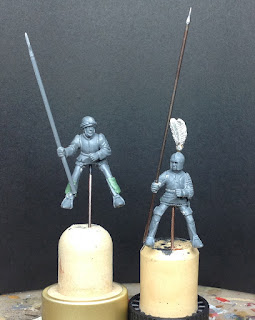 Paint stage will commence next week.

The prepared flag bearers from the previous post are now painted, have had their pennons attached, are in situ supported by more Burgundian coustillers; the supporting second rank for my men at arms. More pictures off the painting table. 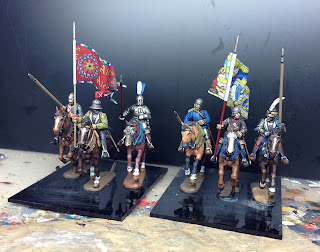 These pennons were kindly provided by Artem ('Imperial Forge'), who created some wonderfully detailed flag designs for Burgundian Ordonnance several years ago, but which sadly have yet to be available to purchase. They are based on images of the plunder acquired by the Swiss from the capture of Charles the Bold's baggage at the battles of Grandson and Morat. Whilst a few pieces of cloth are carefully conserved in museums, other images (including these) are based on drawings made in the 17th and 18th century, as the originals started to deteriorate.

Both of these are pennons of unknown Burgundian captains. The first contains the motto "Atendes"and the original was taken to Solothurn after either Grandson or Morat. The second depicts St George with the letters "E E"and images of large fish, possibly dolphins. It remains in the Museum in Appenzell, with a facsimile on show I believe. 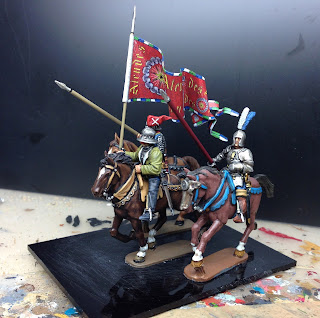 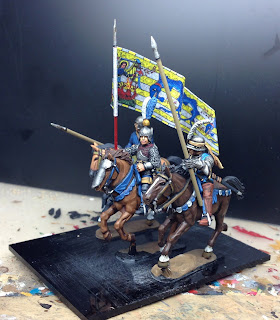 The figures are all Perry plastics, using the Light Cavalry torso & legs, (with one exception of a man at arms with riding boots added) with a mixtures of arms from these and other sets. One figure still carries a small shield, which are occasionally shown (for example, the mounted soldiers in the 'Housebook Master' in the Rijksmuseum) at the end of the fifteenth century - although none appear to be carried in the mounted figures of the period by the Master WA. 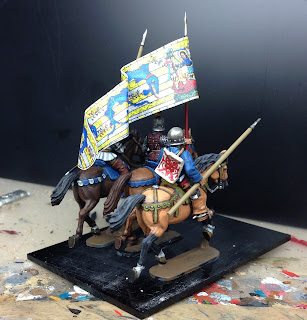 Both pennons need a coat of matt varnish. These figures are on 60mm wide and 80mm deep bases, which I've used to have sufficient room to pose the figures so there's just enough space between them and to make them not appear too uniform and 'parade ground' trained. I have more in Coustillers in preparation, so am hoping to get more done soon, then I will tackle the basing.
Posted by painterman at 10:47 9 comments:

Just as a follow up to the last post, I mentioned that I was adding flags to steel poles rather than the moulded plastic ones, for fear of potential future damage when handling etc. Tonight I've prepared two more Burgundian coustillers who'll carry flags or pennons.

They both use sets of arms comes from the Perrys Light Cavalry box, with the spear and bow replaced and drilled out. Both have plume and pennon added respectively to make them look a little more appropriate for Burgundians of 1470s. Paint to be applied - which should create two more bases this week. 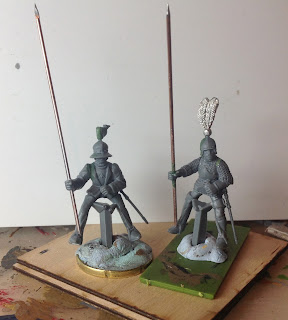 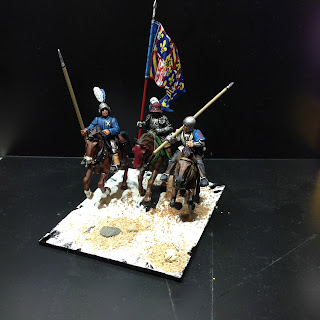 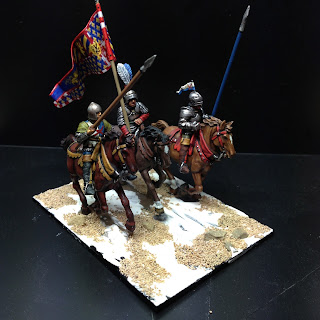