The Bastard of Burgundy is green...

...and ready for painting.

All the men at arms and their mounts are converted and to be undercoated for painting. I've spent a fair bit of time in converting, partly as the process to add putty is a slow one (several mistakes have been redone). These pics do show the amount of additions etc made to the Perry Miniatures plastics. The figure to the left of the duke, is a conversion by Oliver at Steel Fist Miniatures and kindly sent to me - so he'd been reserved for this unit.

I 'borrowed' a couple of horses which I've fiddled about with last year and added cloth coverings over the bard (as Italians), as I've never gotten around to adding paint. Two figures on each side base will carry a flag/pennon and they'll be a row of supporting coustillers etc, in due course. I think that this will be the final composition for the three bases, all held with Blutac as the moment. 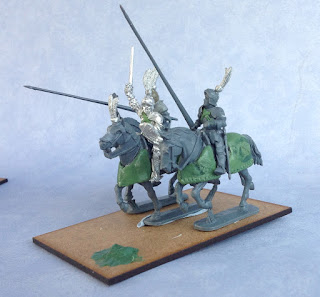 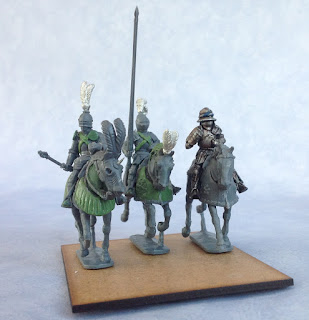 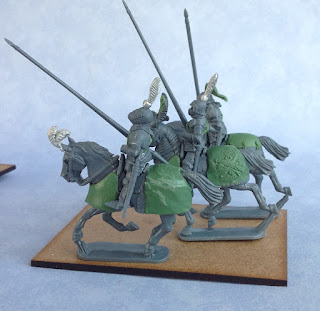 On to the painting stage - I'll post when I have done each group of three figures.

The next unit I'm working is planned to be the last mounted men at arms for my Burgundians. I've saved the contingent of Antony, Bastard of Burgundy as the finale - partly as I wanted to keep back a visually strong unit, and I've felt that my conversion skills have not been up to the tasks in hand until now (thanks to some sculpting coaching session I was fortunate to have).

So this unit will be a high status one - representing the duke's half brother alongside other Burgundian nobles wearing their most expensive harness and horse bards. First steps have been to 'upgrade' and vary the barding, using some contemporary images as my guide. This posting is my current progress, mainly undertaken over the last couple of weeks whilst away on hols.

Searching for reference material for horse armour for this period has been an interesting exercise in itself. Starting with extant armour, there appears to only 3 remaining full bards form the second half of the fifteenth century - Wallace Collection c1480 (A21), Berlin c 1475 (W1052) and Vienna c 1450 - images below. Two of these are accurately represented in the Perry Miniatures Mounted Men at Arms plastic set. 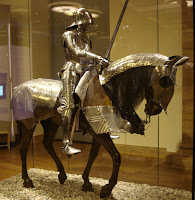 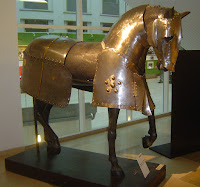 Look beyond these bards however and there's a bit of a void, which I'd not expected to find. The items remaining in collections and museums, which can be accurately dated as reference pieces for a Burgundian army are very limited - mainly chamfrons, a few crinnets and odd pieces of plate. 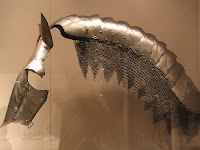 This led me to look at contemporary images. Once again I was surprised by how few I have found to date. Most of the images and illustrations for the period 1450-1490 from battle scenes, saints, classical & Biblical tales, etc show no apparent armour on knightly mounts. Armour for the horse seems to be restricted to chamfrons and the occasional plate or mail crinnet. Its in the early 16th century when horse bard appears to be more in evidence in both museum armoury collections and contemporary imagery.  This leads me to conclude that it may have been the significant increase of gunpowder weapons f(hand held and wheeled) from c 1500 which created the need for men of high status to protect their mounts with plate (as its been argued that the increased power of crossbows from the mid 14th century hastened the development from mail to plate for knights on the battlefield).

So this leaves me with a relatively limited number of visual references to work from, some of which are here. There's a wonderful Italian bard from c 1470, some Flemish and Italian images and (thankfully for my purposes) plenty in the enigmatic scenes in the Berne Chronicles Schilling - showing exactly the troop types which I'm attempted to represent in 28mm. 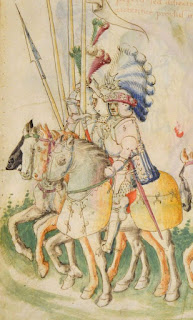 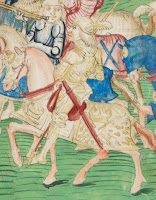 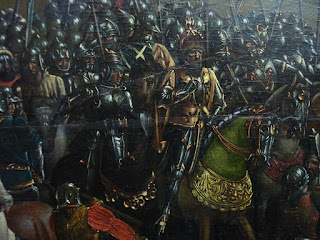 So, here is the work done to date on the models. I've used the Perry plastic bards as my templates (mainly the Italian style one) and have removed with scalpel and smoothing sticks all the mouldings of the plates and rivets, before applying a thin layer of Green Stuff and shaping the details with variety of dental tools and clay shapers. I've also used moulds which Oliver at Steel Fist Miniatures kindly made for me some time ago and tried to smooth out a surrounding layer of putty. The challenges has been many; the main one being to create smooth edges when its necessary to build up the armour at different stages ands so hide the joins. Its a slow process doing one small area and letting that set off before moving to the next. 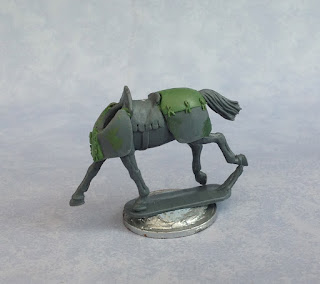 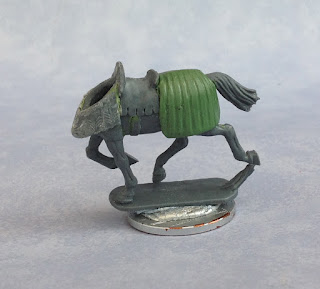 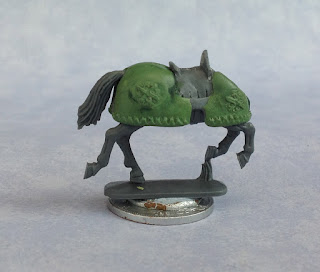 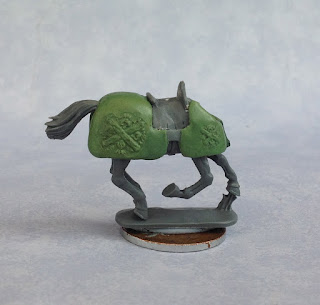 I'm fairly pleased with the results to date, which is giving me confidence to try to do more. But I am apprehensive that paintwork and washes will show up the limitations of my conversion work...we'll see. A bit more to do to get me to the required nine barded mounts, before I start on the riders.