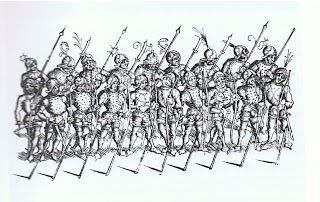 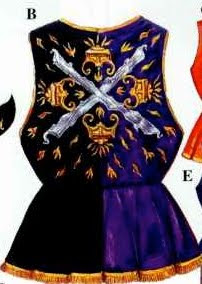 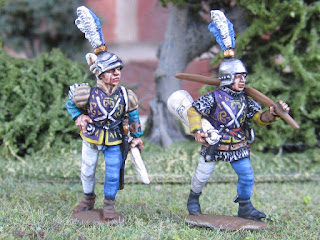 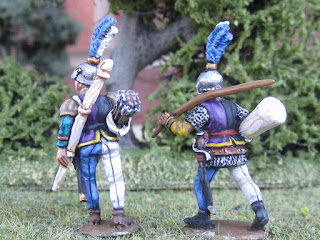 I've started a couple of figures that are planned to form a contingent representing Charles the Bold's household bodyguard. Charles is known to have established a body of guardsmen before he ascended to the dukedom. After becoming duke they formed part of the household, that group of officials who were closest to the duke's person and who performed tasks for the duke's administration.
Briefly, it appears that there were two bodies who were termed 'guards'. Firstly a group of bodyguards, recorded as numbering between 110 and circa 900 at different times during the duke's reign. These appear to have been led by Olivier de la Marche and were organised for battle (according to the documented plan of May 1475) with other members of the household, who I envisage being men at arms. In addition there was also a contingent termed 'squadrons of the guard', who were attached to form a larger fighting unit when required. It's likely that these were drawn from the 1st Company of the Ordonnance, who were also referred to as 'archers of the guard', and who were most likely to have been English in Burgundian service and who's captain was also de la Marche.
Therefore for my army I'm proposing the creation of a unit of ducal guards and a seperate unit of household troops (probably as dismounted men at arms).
The ducal guards will be a unit of mixed halbardiers and longbowmen, reflecting the illustrations of Burgundian troops by the 'Master WA' (one of which is seen here) with front rank of archers and rear of polearmed troops. For the bowmen I'm going to use the Perry metal archers pack, which are great figures, and I've started a couple of test ones here. I want them to look distinctively different and to be ones whose appearance the duke has invested his wealth on. I've therefore added plumes, attached with a pin and small bead (to represent the fitting device). It is known, from a description by Jean de Haynin in 1465, that the duke's guards had a paletot bearing the St Andrews cross in white on black and purple cloth. I've copied the drawing of the interpretation of this by Gerry Embelton (picture here) - although it's unclear if this was worn throughout the duke's reign - but it contrasts nicely with the other livered Burgundian troops and I can just about manage to paint it on the figures as a simplified version. I've kept some reference to the blue and white livery colours in the plumes and hose.
I want to carefully select the figures used for the halbardiers and command and so this unit will be collated gradually, as new usable Perry figures become available.
Posted by painterman at 02:47 11 comments: 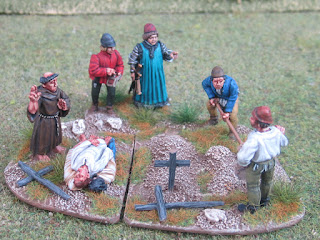 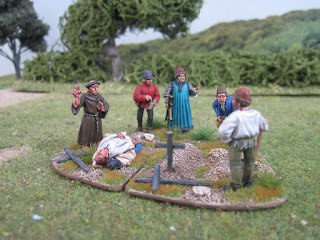 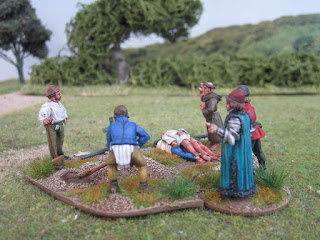 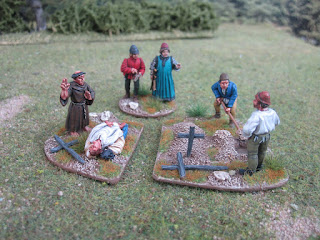 This is a vignette that should have some generic usage, a post-battle burial of casualties. Those who died in medieval battles who were of non-noble status were most likely to be buried in grave pits, rather than individual plots as I've done here (but I don't have room to model a complete grave pit!).
The model uses some of the new Perry figure releases - the labourers, the clerk and corpses the from the tipping wagon pack. The overseer is the William Longstrother figure from the Lancastrian command pack; I was unsure how I'd use him but always had him in mind as I really like the figure. I made him a little more generic, perhaps as a member of the Burgundian household, by removing the cross of Jerusalem that's sculpted on his coat. The friar saying prayers for the souls of the dead is an old Foundry figure from my spares box. The figures are mounted on three bases, so that I have a little extra flexibility when using them. Ideally need to concentrate on core troops now, rather than these more interesting distractions of vignettes (...more keep coming to mind and are logged in my notebook for future).
My recent high levels of output are now likely to drop back to normal for this blog, i.e. just a couple of posts per month if I can manage it, as I start a new work contract next week. More funds coming in, which is very welcome (as I'll be buying a lot of boxes of Perry plastic mounted men at arms pretty soon!).
Posted by painterman at 09:49 9 comments: 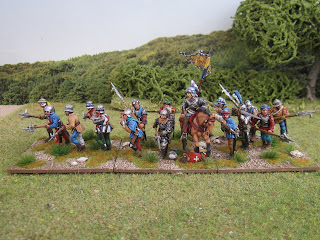 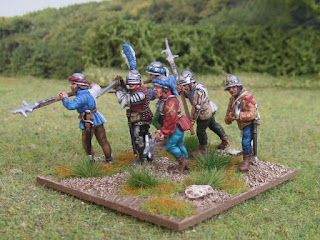 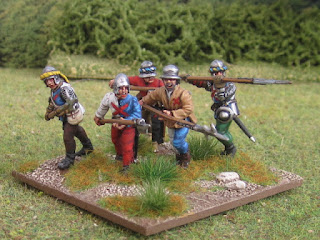 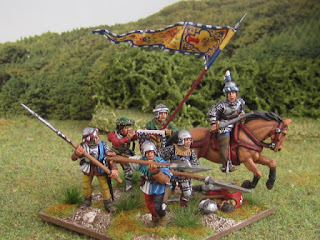 Pictures of the first Burgundian Ordonnance halbardier unit, started a couple of months ago and now based up following the addition of a Perry casualty figure on the middle base.
Figures are a mix of Perry metals and plastics. The mounted conductor has undergone the most surgery - a head replacement and alternative sword-bearing hand, taken from the Perry Mercenaries box, grafted onto a metal Scurror figure. The flag is a free download from and is recorded by the Swiss following it's capture at the battle of Morat, as a flag belonging to Burgundian troops from Savoy.
I'm pleased with the overall sense of movement in this contingent - I want to try and replicate this approach in the Swiss pike bloc that I will use the same figures for on the front ranks (...which is some way off in my plans at this stage).
Posted by painterman at 02:56 12 comments:

Bombard on the march - completed 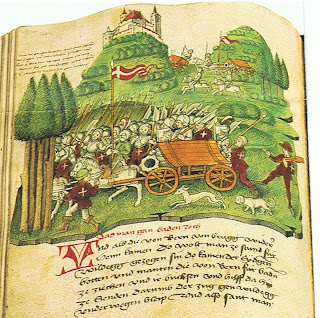 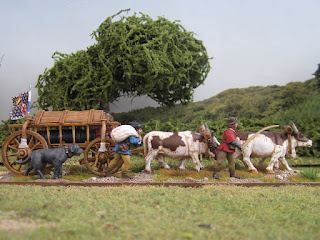 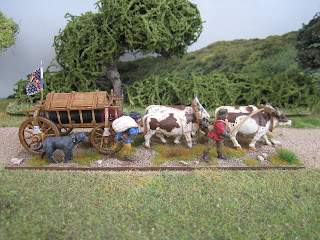 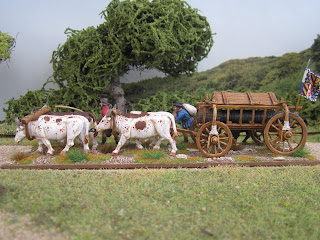 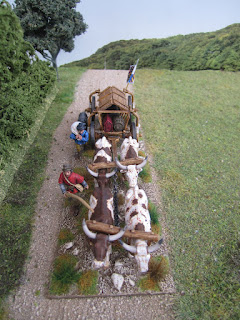 The bombard being transported by wagon; my interpretation of the Swiss chronicle picture.
As explained in the WIP blog entry last month, the wagon and oxen are Perry carrying a Foundry bombard. The wooden cover has been made from a Kingmaker Hussite wagon side, thats been cut to size and folded to fit. I added a chain between the yokes of the oxen. I decided to paint the wagon using Army Painter dip - however I'm not happy with the final colouring and so won't use this approach next time. The construction required a good amount of preparation and and pre-planning, so that the basework could all be done before the wagon was finally glued in place. I pinned a wheel on each axle to the base, as the surface area for creating a strong bond is so small and the wagon would become too fragile.
I waited for the release of the Perry labourers from the WR range to add the man carrying the sack, followed by his dog (a Vendel mastiff). A pack of normal size dogs in 28mm would be so useful....my plea to all sculptors!
More stuff using some of those labourers very soon....
Posted by painterman at 09:23 13 comments: 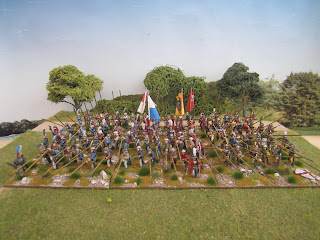 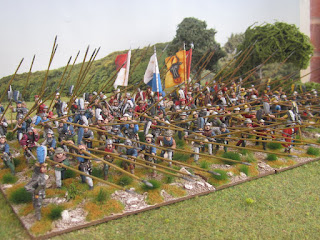 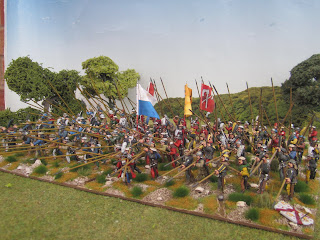 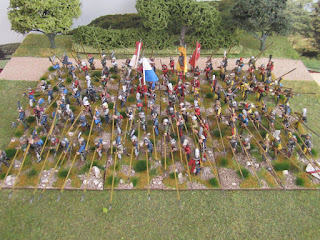 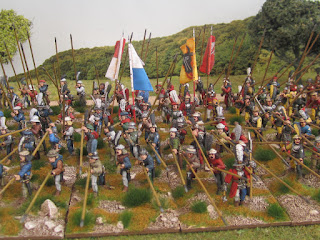 I've completed the lengthy process of rebasing my existing Swiss figures to create a pike bloc for my Swiss Confederation vorhut. These figures are now on a 180mm frontage and effectively represent two of my 'Impetus' contingents, so a total frontage of 360mm, with a 4 base depth (240mm). The vorhut will have crossbow/handgun and halbardier bases added to make it complete. I'm happy with the overall size and composition; I have the flexibility of reducing the frontage if needed (as I do with all my units) and having this depth mean I can get the cantonal standards grouped near the centre as contemporary illustrations show so clearly and visually it looks sufficiently large. You'd not believe how long I have spent planning the basing layout for the Swiss troops and looking at what others have done with similar pike units (!).

This pike bloc represents the cantons of Lucerne, Uri, Biel, Unterwalden, Nidwalden and Obwalden (the flags for the latter two will be added). The figures are nearly all the Swiss Foundry range, which are the first historical range that Dave Andrews did before starting his 'Great War Miniatures' company. They are historically accurate figures for the Swiss in the later fifteenth century and are nicely detailed and a pleasure to paint. The paintwork on these is a mix done over the last few years, by 'Clibanarium', Dave Imrie, Jim Bowen and myself. I have enough Foundry castings to do a second pike bloc with these figures and for the other one I'm planning, which will be a larger unit and will represent Berne and her allies, will use Perry figures.

I'll re-shoot this when the extra halbard figures have been painted and based. 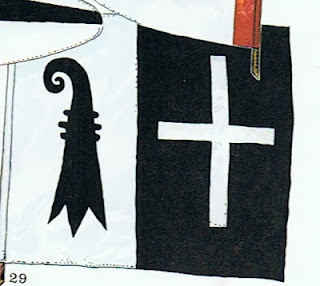 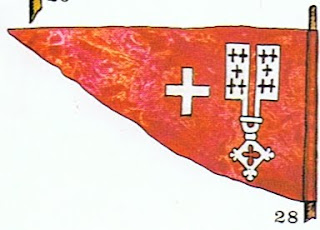 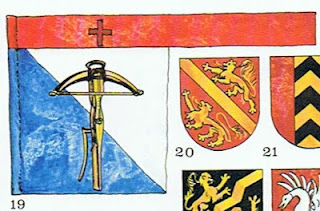 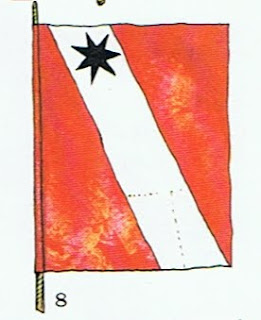 Pete,
Many thanks indeed for offering to produce the extra canton flags.
here are some images, all taken from the Osprey 'Swiss at War 1300-1500' book, for those I'd like to add to my Swiss Confederation army.
These are Basle (no 29), Nidwalden (no 28) which would be good as a standard sized flag please (instead of the triangular fahnlien) with the key on the pole-hand side and the cross on the opposite side.
Thun is no 8 and Zurich flag for crossbowmen (no 19), perhaps as a smaller sized flag compared to the other ones, with a white cross (rather than red?).
I hope these are OK as images to work from?
Many thanks once again.
Best regards
Simon.
PS - I like your Italian wars collection - even more visual appeal than medievals!
Posted by painterman at 13:21 No comments: 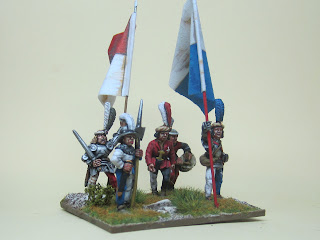 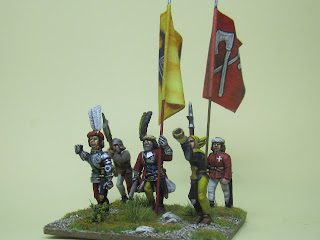 I've been rebasing my existing Swiss pike bloc, to align it to the frontage I'm using for my Burgundian-Swiss war armies. This is taking a little longer than I expected it to do. As an interim post here are the two command stands which carry the cantonal colours. They feature two of the headswops on the Citadel Dogs of War figures from the last post.
I'm still to add two more flags, which I have on order from different sources. The flags I've used here I purchased on ebay some time back; they're printed on cloth and I have to say that I was a tad apprehensive using them for the first time. However I'm delighted with the finished standard of them, the key is the use of a new scalpel blade to avoid any tearing when cutting them out; I only wish they covered all the cantons I want to use.
So at present we have the cantonal colours for (left to right) Underwalden, Lucerne, Uri and Biel. The latter is a repaint of one of these cloth flags, as I added the crossed axes to a red printed flag. Nidwalden and Obwalden are the missing cantons. I've assembled these cantons together to form one of the pike blocs based loosely on how the cantons appear to be organised for Grandson, based on the Osprey 'Swiss at War' and Richard Vaughan's 'Charles the Bold', but it's not definitive and frankly a mix of colours has a nicer visual appeal.
I should hopefully have the rest of the figures re-based for a photo shoot next week.
Posted by painterman at 14:14 10 comments: