The last bits and bobs for the Salute Tewkesbury game, finished just in the nick of time.
Tents and related hangers-on will be lurking at the back somewhere, probably behind the Lancastrian army as they appear to have been encamped nearer the battlefield. The tents are from Steve Barber Models, with guide-ropes added from florist wire, on 'Warbases' circular mdf bases which Martin delivered in very short time (thanks!). The latin religous motto was spotted at recent trip to Warwick Castle on a re-enactor's tent and adapted here in a simpler form. The smaller ridge tent is from Valdermar Miniatures, from Denmark (I think), makers of some very interesting metal and resin medieval figures in 1/72nd scale. So although this is effectively 20mm, it seems to work OK for these figures as a more modest tent; some personal possessions (bedrolls, chest, etc) will be added inside one day.
The figures are Foundry, with exception of the Mark Copplestone-designed man at arms (a 'Wargames Illustrated' subs giveaway of a couple of years ago) and baggage items are a mix, inc Foundry and Front Rank.
Flagbearer is another Perry plastic converted bowman, holding LBMS English royal arms.

Pics taken with new camera, with flash and artificial light, can you tell any difference yet? 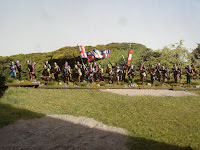 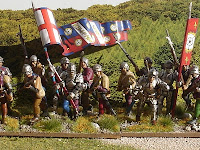 The last contingent for the ‘Salute’ game - bills and bows for Edward IV. The murrey colour has been mixed (equal parts of mid red and mid blue, with some GW Elf Flesh added), dipped and then highlighted again with more flesh added to lighten. As there’s no actual evidence for what colour murrey was, so think I’m on firm ground here... but feel free to comment! Edward’s ‘rose in splendour’ badge was then painted on some livery coats. Figures are all Perry plastics – I'm still trying to find some combinations of poses that don’t repeat any I’ve done before. The flags are from the Perry’s Towton sheet that comes with the boxed plastics.
Now just trying to finish off a couple of tents and related encampment bits for the game...
Posted by painterman at 04:38 6 comments: 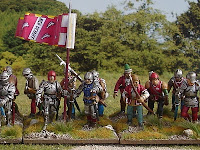 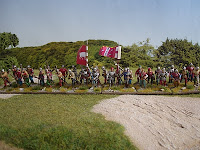 Second complete unit; this time full strength (ie 2 50mm square bases of men at arms and 4 of bows) and depicting the earl of Devon, who commanded the Lancastrian left wing. For more info on the earl, see an earlier blog.
Perry plastics using more dip and highlight approach, this time with acrylic matt varnish. Not too bad when viewed en masse and at a discrete distance. Flags from Freezywater sheet.
I had planned to add waterslide decals and had some made up, but regretably the detail at this size becomes very indistinct and the decals are too brittle to apply without some element of damage (or they are with my clumsy fingers anyway), so had to revert to some rapidly handpainted white boar livery badges.

Next up, last Salute contingent for Edward IV. 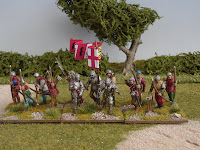 This is effectively a half-sized contingent for the Perry’s Salute game, to bulk up a Yorkist 'battle'. Lord Grey was a key Lancastrian protanganist at the battle of Northampton, who’s defection appears to have been the catalyst for the Yorkist victory. At Tewkesbury he was fighting for Edward IV, having been made earl of Kent by the new king. These figures will be increased in size later on, to form one of the wings for my Northampton game.
The figures have been blocked and dipped, with minimal highlighting on these as done at double-quick time. The dip was then matt varnished with Humbrol ‘Matt Cote’ (except for the plate and mail). This varnish has killed the gloss dip, but also has killed nearly all the depth and subtley that the dip creates! So different varnish on the next batch. Ready very soon.
Oh and I forgot to reveal the make of the artillery piece, of a couple of blogs ago... I know you've all been waiting patiently, breath abated! Well Kelly, the designer himself, got it right! It’s a casting from Empire Miniatures of Australia, now sadly OOP it appears.
Posted by painterman at 09:02 3 comments: