One Pauldron and Four Destriers.


The Beauchamp Pageant is a document from c1485 which includes a series of fine ink illustrations depicting events in the life of Richard Beauchamp, earl of Warwick. These include several military and jousting scenes, which provide detailed images of contemporary arms and armour and are therefore a very valuable source. One of the illustrations depicts a chevauchee following the failed siege of Calais in 1436. One of the mounted men at arms wears an interesting combination of armour. His left arm is protected by plate, including a pauldron. However his right arm has a mail sleeve over plate rather than a matching pauldron. There is another figure in this picture, depicting a Burgundian, who appears to be similarly attired. I’ve not yet found another contemporary illustration showing this arrangement of only one pauldron – but I will continue my brief search to date. 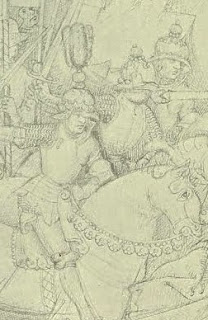 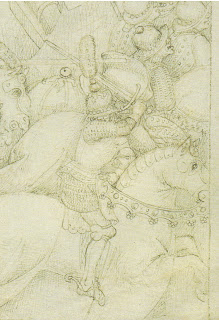 I’ve never worn reproduction armour, but I assume that there may be some pragmatic benefit from this, namely that the right-arm has some degree of greater freedom of movement for wielding a hand weapon; both of the figures illustrated fight from horseback with swords. As the Pageant is regarded as an accurate portrayal of dress for the period, I thought I’d attempt to depict this figure to add to my Burgundian men at arms – using some of the options created by the Perry plastics – with his primary weapon of a lance. 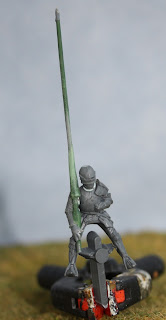 I’ve taken an arm holding a pike from the Mercenaries box, with mail sleeve over plate, and built up around the lance grip using green stuff. This has been temporarily attached to the figure for the photo – I’m going to do more work on the helm later or use an open-faced sallet with a plume. It does look a slightly odd figure, but I’ll also use other arms parts to create a sword-armed version and see how that goes too. 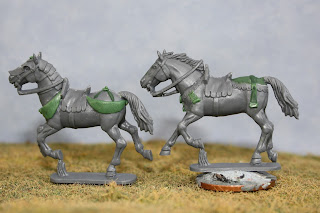 Meantime I’ve also prepared a few horses to start painting whilst on the family's annual holiday in France. I’ve had little success trying to paint 'al fresco' whilst away in previous years, where the light is often too bright and the warmer weather (..here’s hoping!) dries the acrylics too quickly. So this year it’s horseflesh and I’ve fiddled around with green stuff on the tack on a few Perry horses – who’ll have coustillers added at some future date – to create variety. The rest of the dozen horses have been assembled pretty much out of the box – with the obligatory filling of the joint across their backs. 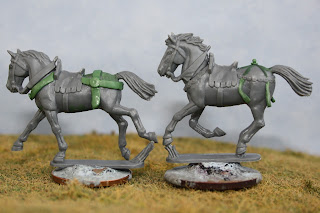 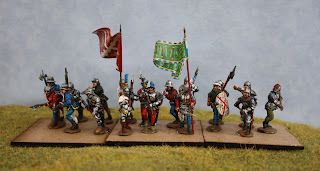 Having intended to start more mounted men at arms for my Burgundians, my immediate plans were changed by the discovery of a dozen finished halbardiers. These had been painted for me last year by Chris Thompson and had been packed away in a box under my desk which I’d completely overlooked since then! (Note to self...brain cells dying...must write more things down...!)  So I’ve been prompted to add another seven figures, to create a second contingent of Burgundian Ordonnance halbardiers, on my usual three-base elements. 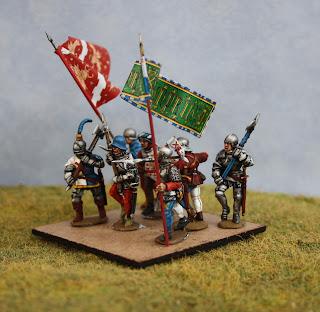 The figures are mainly Perry metals, with a couple of headswops from the plastics. These are very finely detailed figures. I’ve included some Italian castings, as mercenaries recruited for the Ordonnance Companies, and utilising shields bearing Charles the Bold’s devices (applied and trimmed down LBMS pavise transfers) , for which I have no contemporary references, but they create a bit of nice looking variation. 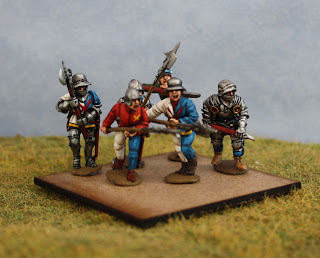 The flags are from printed sheets, which I was very kindly given by fellow bloggers (so many thanks guys!), which I believe Bruno Allanson originally designed but were not made commercially available – I’d still like to obtain some more if anyone has any they don’t need please? The detail on them is great, although they are quite large for my liking and I may re-size them down a little before I finally finish off this unit. One is a pennon bearing the duke's 'je lay emprins' motto with cross and flints, the other is a red flag bearing a cross of St Andrew and flints, which is recorded among the items captured at Grandson and brought back to Bern. 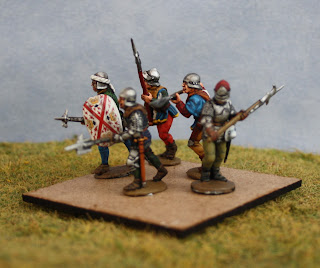 The scenic basing will be completed following my summer holiday, which is imminent. I may fiddle around with the final composition of the figures, so expect some minor changes when I post the finished unit. (Sorry about the poorer quality pictures, my daughter's taken my usual camera on a trip abroad.)

Assuming I don’t find any more gems hidden away, it will be mounted troops next!

An interim posting of prepared figures, ready for painting. These will complete the base for the duke of Burgundy, who along with his herald, are already completed and on an earlier post. 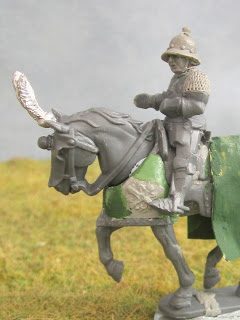 The mounted figure will be carrying a large banner of the arms of Burgundy. He’s another great conversion of a Perry plastic that Oliver at Steel Fist has done. The figure is based on one from the Beauchamp Pageant, which was used for as the basis of the standard bearer on the cover illustration of Osprey’s ‘Wars of the Roses’. Oliver has added a new head wearing a wonderful domed kettlehelm and mail sleeves. Sword scabbard is to be added. 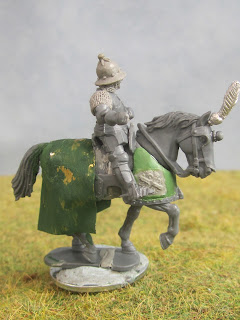 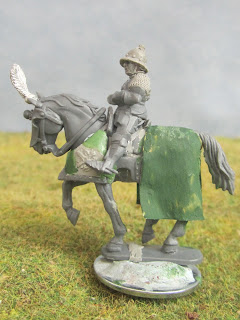 I’ve converted a Perry plastic horse. The more passive stance is the result of cutting two different assembled horses at the mid-saddle point and then attaching the different halves together. I’ve added caparison to the horse's hind quarters using the method that worked OK on the duke’s mount – cutting and gluing thin foil (from a paper template I make first) and then coating with a wash of GW’s green stuff. The peytrals have had the original moulded detail removed and a St Andrew’s cross added from one of my press mouldings (..more of Oliver’s great handiwork), blended in with green stuff. A plume has been added to the chamfron. 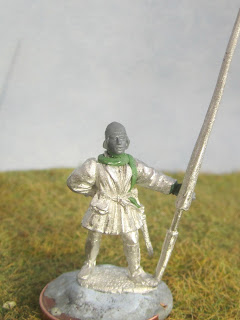 The duke’s lance holder is a simpler conversion. He started out as a master gunner in a Perry artillery pack. A new hand now holds the lance and in addition to a plastic head replacement (looking slightly up at the duke on his horse), I’ve added a chaperon being worn in a way that’s commonly shown in Flemish and other contemporary illustrations. 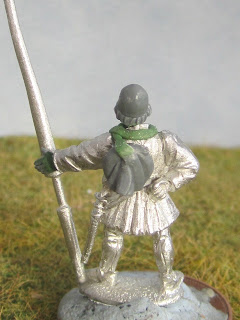 It’ll be some time before these see any paint, as I have other immediate commitments, but I’ll post up the finished base.