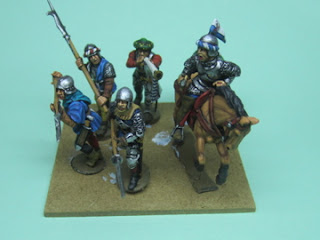 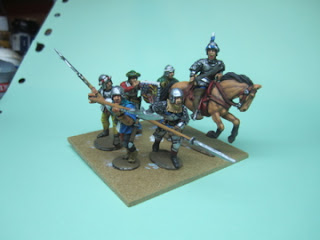 These are figures intended for the command stand for my first unit of Burgundian Ordonnance halbardiers, of two that are planned. They will have a stand added to either side to form the completed contingent. The figures are on my usual 60mm square bases and are a mix of Perry plastics and metals. The figure at the rear in the green coat will carry a banner. The mounted conducteur has had some surgery; he's a WR range 'scurror' with a plastic head from the Mercenaries box added as well as his open hand for lance replaced with a plastic sword holding hand.
The new metal halbardiers are very useful detailed sculpts, but yet again they are let down in the mouldmaking or casting process and details on the hands in particular are either distorted or lost altogther. This is very disappointing when you see the lovely greens on the web and then get to paint the castings.
I now am confronted with the dilemma, when I finish the planned figures for this unit, of to base or not to base? I'm hopeful that the EA range will be added to, specifically with foot command figures for Franco-Burgundians (as well as Swiss) and casualty figures. Any of these would potentially fit well into this type of unit and so I'm tempted to hold off gluing and basing these and await future releases. Therefore it maybe some time until these are finished. No doubt - new figures or not - I'll fiddle around with the final composition a bit more. I'll post the other accompanying figures when done.
Posted by painterman at 14:35 3 comments: 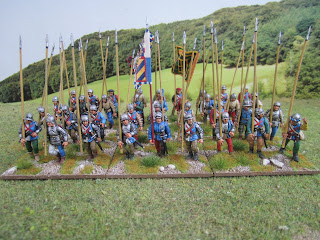 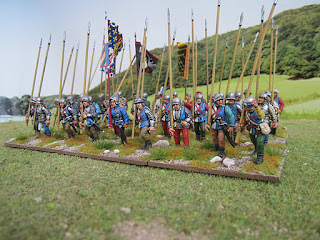 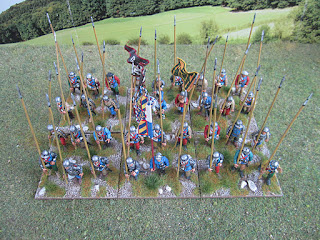 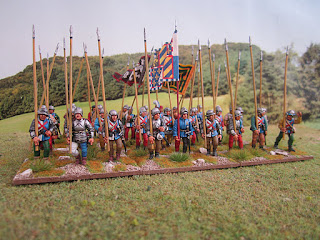 I have finally completed the first of two Ordonnance pike blocs; these have taken longer than planned, partly as I've not been working on them exclusively and as work commitments have been heavy and so not much painting has been achieved over the last 2 months (hopefully this will be rectified before the end of the year).
Most of the figures are Perry plastics, straight from the Mercenaries box with minimal modifications, with a few of the recent metal marching billmen added. I've not spent so long on detailing each figure as they are somewhat lost within a larger unit. According to the Burgundian Ordinances pikemen should have carried a buckler too, however I've left them off these and will add them to the other pike unit, to create a subtle visual distinction. I have aspirations to add another front rank of bases for them, using some of the advancing metal figures and a company captain, although I'm happy with the overall size of the unit as pike units can appear to lack the required bulk and depth sometimes (my Swiss ones will probably be at least twice the size of these).
Most wargame army lists for the period cite Charles the Bold's pikemen as Flemish or Lowland, presumably based on the use of pikes by such armies in the Burgundian territories earlier in the fifteenth century. It is not clear to me how the recruiting of each of the Ordonnance Companies related to geographic or regional boundaries. We do know that the duke contracted with mercenary leaders for specific numbers of troops to form Companies and that others would have been raised directly from lands within the dukedom, such as Flanders. Equally we know that companies comprised of different arms, such as pikes, crossbows, handguns etc and that certain territories were more likely to provide certain specific arms, notably England for longbowmen. Therefore it seems to me that on the battlefield company organisation would need to be sufficiently flexible to re-arrange the differing arms within the companies into larger fighting blocs of similiar types, i.e. pike blocs and handgun units and so a mix of nationalities could compose a fighting unit?
However, for this unit I've reverted to assuming that these are Flemish sourced troops and hence they display arms of Ghent, a flag of the stonemasons Guild for the city and the Burgundian arms. Painting and posting should speed up a bit now, as I have more free time, and will be starting on a halbard unit.
Posted by painterman at 03:27 7 comments: