Just a quick posting, as the snow here today has allowed some time to be spent at the painting table as it's been too cold to work in the garage on my Cravant terrain boards. I seem to have got back into the groove for painting (rather than just chopping and assembling figures). 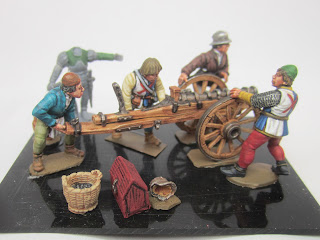 Here's the Burgundian artillery group from the last post at the next stage - all figures, gun and related bits have been painted. All that can be is now glued to the base, ready for sculpting the groundwork. The headless master gunner remains well... erm... headless. I'm awaiting some items that I've commissioned for my late medieval figures to get his helmet done and so he'll now be the last piece to do before completion. Happy with how they've all come together; working frantically as a team to re-sight the (already loaded breech) gun. 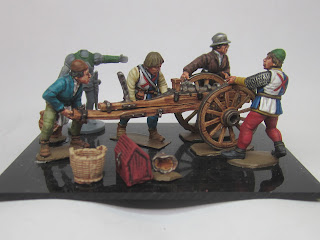 Also, as they have been on the table, here's some Burgundian Coustillers I've assembled and slightly modified. I now plan to add a second row to all my Burgundian men at arms. These will give the units a bit more visual and actual substance. As a result they'll maybe a few less men at arms units in the completed army, but we'll see. The Coustillers will comprise of lesser armed figures, with mix of lances and spears, plus I'll have more of them carrying flags and pennons, which always looks good. 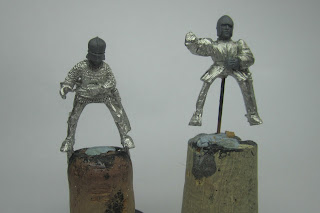 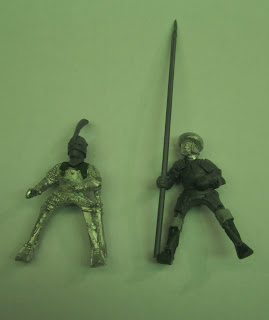 Sorry for the poor quality pics. Three of them are Perry metal 'Scurrors' with plastic heads attached for some variety. Top right is a herald model, the one holding the sword, with hands removed and to be replaced with a flag at some point - I have several of these castings and I like the option of having some Coustillers wearing coats over their armour.  Last figure is a plastic man at arms with putty/green stuff riding boots added and Italian head (...very nice sculpts and a useful pack).

Works of Progress (I) 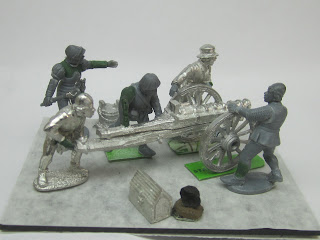 Many thanks to all who voted in the poll. I was pleased with how the Lord Chalons group worked out  so it’s nice to see them as the winner, although it was ‘Cyril’ the Bernese bear who made the initial running with the votes. I’m astonished that over a hundred votes were cast; beforehand I was contemplating that I would get about 25 in all.

At present I'm  flitting about rather unproductively - starting several things but not getting any of them near to completion. So it looks like a number of work in progress posts will be forthcoming. I have to complete my mounted men at arms and have started some Ordonnance coustillers and more handgunners; making minor conversions which the plastics allow you to have a go at, coupled my limited putty-pushing skills. In addition I’m making my first terrain tiles for the critical river sections for a Cravant 1423 game at this year’s Salute using my HYW figures. My natural inability to cut straight edges has slowed this down - as all the related filling and gluing is taking an age to dry out in my garage in the damp winter weather!

This is another base that’s at a WIP stage. It owes it’s existence entirely to ‘Admiral Benbow’ on the excellent LAF Forum, from whom I have shamelessly plundered his great idea of converting Perry plastic figures to create a Burgundian crapaudeux being manhandled into position by it’s crew. The Admiral (Michael) used all plastic figures, but I’ve mixed in a couple of Perry metals who seemed to have useful poses. All the figures have had some work on them to change arms and/or hands, carefully removed with a scalpel from the Mercenaries and Bills & Bows sprues. The gun is a Perry metal. The master gunner holds a lindstock created from a trimmed-down halberd with thin wire added as the fuse.  His arm needs some work to hide the new joint and I’m unsure if this will be the head that I end up using. 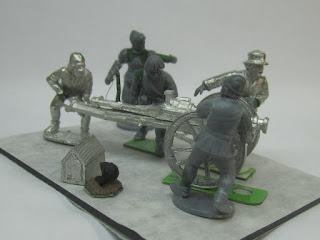 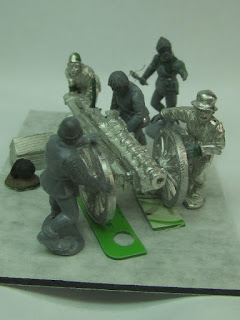 Hopefully the end result will represent a moment that is likely to have occurred at both the battles of Grandson and Morat, when the rapid advance of the Swiss Confederation created surprise among the Burgundians. This must have created a need to urgently realign and discharge the field guns onto the advancing Swiss. 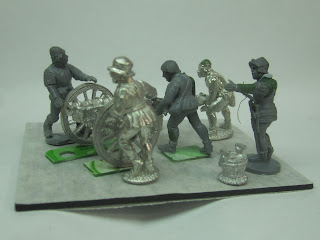