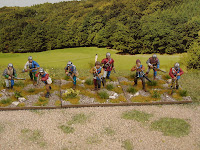 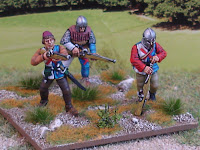 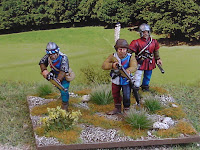 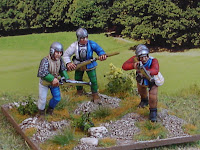 First unit of hangunners completed, relatively quick to do as only nine figures. All are Perry plastics from the new 'Mercenaries' box, with one exception of a metal figure - an artillery assistant who's had the chamber removed that he was holding and a plastic handgun added, I thought he'd fit in well as he has a powder horn slung over his shoulder. I'm sure they'll be more of these straightforward conversons that can be done, using parts from the plastic boxes, as more metals get released.
No flag on this unit as they are skirmishers. Not much else to add; other than the new plastics are a delight to assemble and are really excellent figures. A couple of the new heads on the command sprue are attached at the chin, rather than the neck plug, which means you need to be careful with the scalpel when removing, but I'm guessing this maybe to lessen any mould lines? But hey, with this quality of late medieval figures, I'm not complaining - I'm celebrating!
Next I need to decide on either starting a bigger pike unit or completing the artillery? Where's that coin....?
Posted by painterman at 13:42 6 comments: 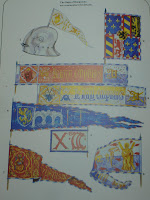 There is a considerable amount of information on Burgundian flags compared to other contemporary fiifteenth century armies.
I've decided on my approach for using flags based on my researches, however I appreciate that it's probably applying a structure thats too rigid in relation to a practice that was probably not univerally applied to Charles' army. However the use of flags does help identify unit types on the wargames table.
In essence, it's possible to summarise Charles the Bold's flags into 5 broad categories:
Burgundian arms - the complex and visually attractive arms adopted by Charles as duke of Burgundy (2 on the above picture). These will be used with my command figures, as well as in vignettes, camps and as a general sprinkling among larger units.
Ordonnance flags - these are the flags assigned to each of the 27 Ordonnance companies, which Charles first established at the Ordinances of St Maxim de Treves in 1473. Most of the flags follow a similiar design; the image of the saint adopted by the company, Charles personal motto 'Je Lay Emprins', and the images he used of a steel flint and sparks, all embroidered on a single or two colour background (see 3 & 4 above). From surviving records there appear to be two types - a 'guidon' which tapered to a single or double points ( numbered 7 & 8 above) and a 'cornet' which was oblong (number 3 & 4 in the illustration). It appears that each company would have had both guidons and cornets. Indeed some of them are marked with roman numerals to indicate the squadron they were attached to - so each company of ordonnance would have had a quite a plethora of flags flying. However wargaming necessities simplification when miniaturising everthing and so my application will simply be:
- a guidon for each mounted Ordonnance company,
- a cornet for each foot Ordonnance company.
These will be placed on the middle base of the three that will make up all my units, alongside the command figures and occassional musician.
Personal flags - of the leaders and conductors of the Ordonnance Companies, who had the right to bear arms as a consequence of their social status. Many of these are known and a great reference is Freezywater's publication 'The Burgundian Army of Charles the Bold' by McGill, Pacou & Riddell, which includes the arms of most leaders as well as other flags. My approach is to add one to each mounted Ordonnance unit, alongside the Company Guidon.
Other Infantry and regional flags - according to the Swiss records of burgundian flags, other types were used, which don't seem to conform to the Ordonnance pattern. These include images above numbered 6, regional flags (such as the Flemish urban arms) and flags which combined the St Andrews cross with a mix of colours and patterns. These flag types I'll use either on vignettes, as markers or in larger units (such as Flemish pikemen).
Bannerols - these were small pennons attached to the helms of Conductors and Chief de Chambre; men who led the squadrons within each Company. Evidence suggests that these included a numbering system for each squadron (see picture 1) and the 'Master WA' drawings of Burgundian troops shows them being quite plentiful among foot and mounted formations. The Perry Mercenaries box contains two heads with bannerols and it's not too tricky with pin and foil to add some to metal figures, to mix into each Company base. In addition smaller flags denoting the squadrons also appeared (illustration number 5) but it's too micro level to include these.
Currently the best quality flags for Burgunidan Ordonnance in my personal opinion, are the free ones from Kriggspil site, http://www.krigsspil.dk/download/download_2.html
I'm hopeful that the new Perry figures will spur other flag producers into covering.
The illustration is copyright Osprey Publishing, from 'Armies of Medieval Burgundy' and used without permission. 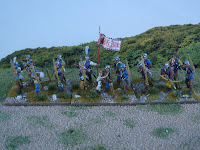 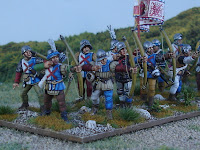 Ok, so back on track with some pics of completed work - more Burgundian longbowmen (a year on from the first longbows, I'm a tad embarrased to say). Apologies that the images are a little 'bluish' as the daylight today is a bit dull & wintry.


These are Perry plastics, which I've been waiting to finish off, so I could use some of the new heads from the 'Mercenaries' pack for variety. I've also added a couple of arrow bags (from putty) and included one of my two-finger gesture modifications too. The flag is from Krigsspil site (free downloads ) which are really high quality for the Burgundy range. It shows a flag with an image of Saint Jude, but it's not known which Ordonnance Company this flag was associated with, so they'll remain anonymous for the time being. There is an embarassment of riches with Burgundian flags and banners, largely due to the Swiss keeping and then recording most of those they captured at Grandson, Morat and Nancy. I've been looking at how I utilise them with my planned army and I'll post more on that soon (...when I've settled on a system).

The figures are based on three 60mm square bases, effectively a 'central' base which will include commanders, flags etc and two 'wings', to form a gaming unit. This appraoch will be replicated across all the units - foot and mounted - intended to support Impetus rules, but should be flexible enough for other rule systems and could allow me to create more units by simply using only 2 bases together.
Over the holiday period I've had a modest spike in new followers, not sure why this was in a period of no posts, but it's very pleasing all the same and so welcome to you all; I hope that they'll be something of interest coming along in 2011. The Perry WotR range that I'm using for these armies, has had some great new recent releases, including Swiss metals heads, so I'm very enthused re this collection at the moment. Currently I have a first unit of Burgundian Ordonnance handgunners are at the construction/prep stage. 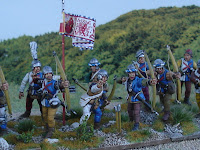 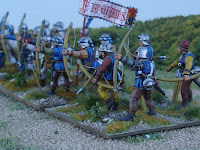