Here’s my representation of the bodyguard for Charles the Bold. 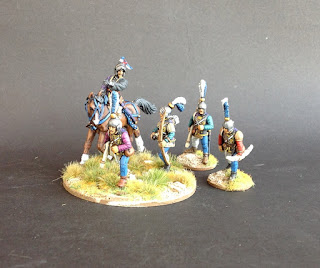 I've not been able to discover for certain a date when the ducal guard was established. It may have been by duke Phillip, possibly as a consequence of the murder of his father John in 1419. There are records of robes and paletots being purchased for 24 men of the guard in 1433 and 1435. In 1465, in the dukedom of Charles, these were made of black and violet cloth, bearing a white St Andrew's cross and embroidered with flints and sparks (the scheme which I have followed).

Under Charles the Bold the guard were initially part of the ducal household, which comprised of around 300 persons, who had a wide range of posts and related duties, including chamberlains and equerries. The more senior of these roles were held by high ranking individuals from Burgundian territories and so they would also be expected to have a military role too. 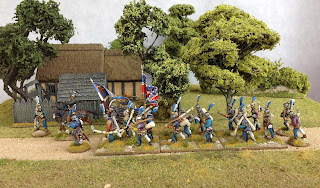 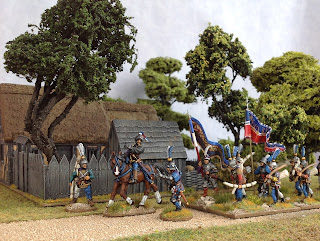 A distinct body of guards with a battlefield role, rather than merely providing protection for the duke, appears to have established by Charles, who continued to expand it's size over the duration of his dukedom. In May 1476 the household troops comprised of 4 mounted units of men at arms and companies of archers of the guard, specified as being English, totalling 400 men and under the command of Oliver de la Marche. To this core contingent, it appears that other troops were attached on a temporary basis – either for the duration of a campaign or for specific purposes. Later in 1476 another 400 archers were attached to the household guards; clearly there was a high degree of pragmatic flexibility in its organisation. 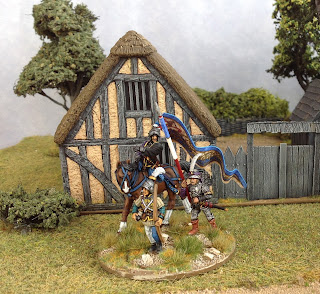 The household troops had their own banners. In 1474 the duke commissioned large standards with images of St George along with guidons and cornets for the different estates of the household, including the “archers of the bodyguards and for his guard”. For my unit I’ve included a flags captured in the wars with the Swiss and recorded as being used by the guards (A free Krigsspil download) and a St George guidon (Pete’s Flags). 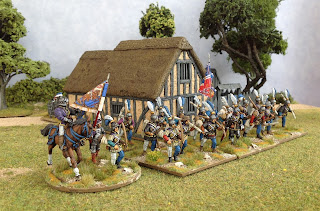 The figures are all Perry Miniatures, a mix of metals and plastics. My involvement has been limited to assembly – where I used spare archer’s arms and arrow bags from the Light Cavalry box to add more dismounted archer figures, to the metal Perry set. All have had plumes added, to make them appear as lavishly kitted out as I’m sure the duke would have done.  The mounted captain is the figure offered with the Light cavalry deal. All the painting has been wonderfully executed by Rafa ‘Archiduke’ – including the details of the paletots bearing the ducal insignia. 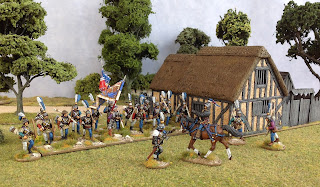 I’ve used ‘sabot’ bases for the first time with this unit – to provide some flexibility on how I use these figures. The central base has these, along with the separate command stand, so I can swop the captains and flagbearers around a bit. I’m not usually taken with this style of basing for complete units, but I’m now planning to do a few more for vignettes and small groups of non-combatants, so they can be mixed up for different scenarios. The foot figures are mounted on coins, using outer rings cut from plastic by James of Oshiro Model Terrain 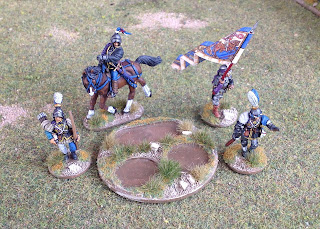 Rafa's own close-ups are here to show the immense skill and fine detail of his paintwork. 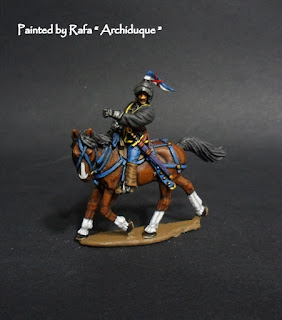 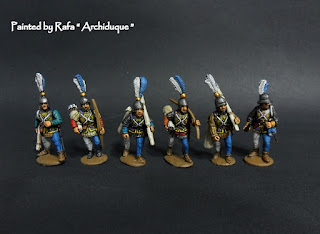 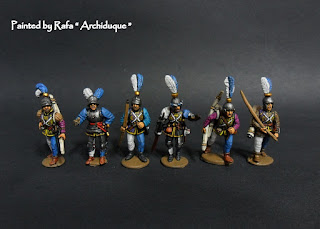 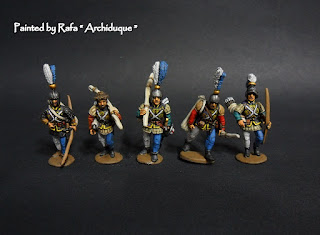