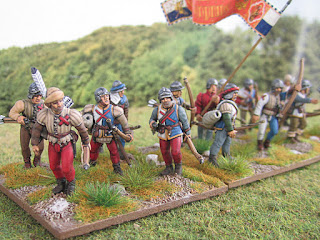 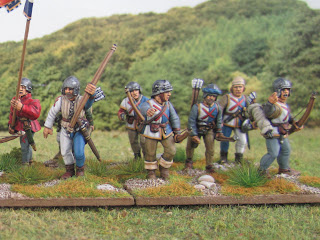 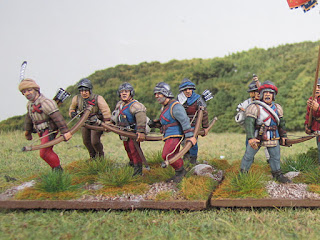 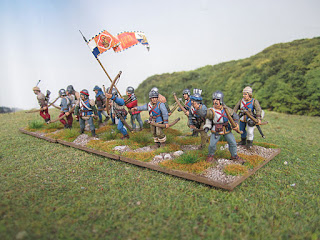 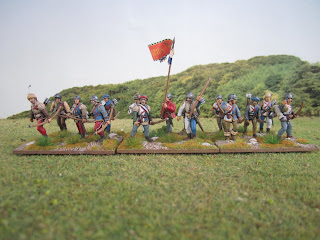 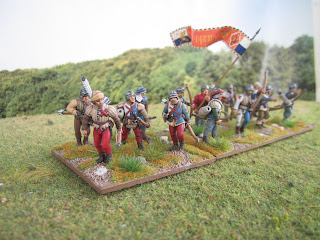 The fourth and last unit of Burgundian Ordonnance longbowmen. These are the balance of the figures painted so well by Rafa of Archiduke Painting; one of the figures painted by me is tucked in at the back of one of the stands. The flag is a temporary one for the purposes of the photo, until I decide which Company these will represent.
The remainder of the Ordonnance companies will comprise of either pike, handgun, crossbow or halbards (the latter is at an early stage of prep). However I do plan to complete a unit of Ducal Guards, which will be represented by longbowmen, either exclusively or in a mixed unit with halbards. These will wear the Charles personal livery and be well equipped - I'm going to see what other metals get released in the Perry WR range before deciding which models to use for these.
Posted by painterman at 11:38 6 comments: 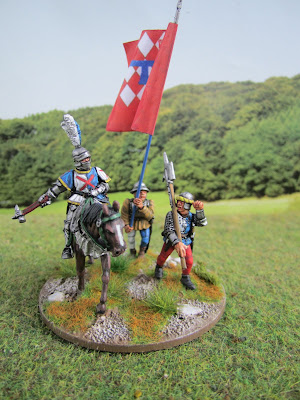 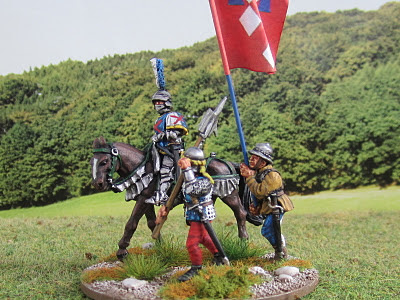 These are the first of my vignettes for the leading captains for the Burgundian Ordonnance army. Each Company of the Ordonnance were led by Conducteurs, personally appointed by the duke. Records of these men are known for most of the companies in Charles the Bold's reign, either from extant appointment records or other documents forwarding them ducal instructions.
First captain is Josse le Lalaing, a Flemish nobleman, who was appointed as conducteur of the 14th Company of the Ordonnance in 1473 when the company was established. The company is known to have taken part at the siege of Neuss in 1475 and was at the battles of Grandson in 1476 and of Nancy in 1477. The figures are all Perry. Lalaing is a wars of the roses personality figure with a plastic sallet and plume added. The fist-pumping halbardier is a plastic from the Mercenaries box and the banner bearer a metal.
The other conducteur depicts Giacopo Galeotto, who was one of the many Italian condottiere mercenaries that Charles employed within the army. Galeotto was from Naples and appears to have been appointed to lead the 11th Company in 1475, where he was recorded as being the conducteur at the siege of Neuss. One can assume that his appointment would also have been linked to him providing a number of fighting troops for the company as well. He led the company at the battles of Grandson and Morat, and at Nancy where he was killed. Again the figure I've used is another WR personality figure. I've added a mazzochio with some modelling putty - this is an Italian style of chaperon, which can be seen in the Rout of San Romano paintings worn by condottiere. His plumed barbute, ready to be donned should combat arise, hangs from his saddle. The banner bearer is a Perry scurror figures, again with a plastic barbute headswap, to given him a more Italian flavour.
Both have flags downloaded from the web, which I plan to upgrade to printed ones in the future. 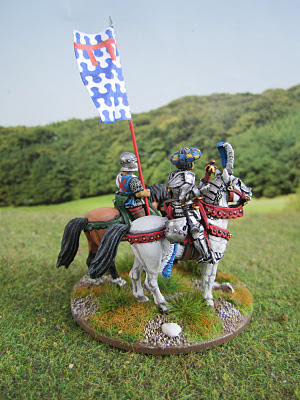 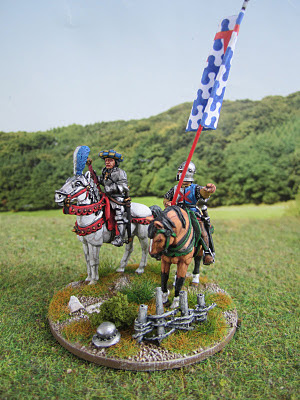