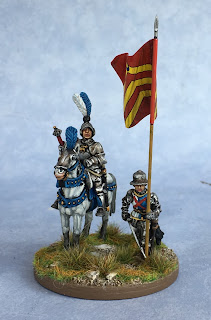 Phillipe appears to have been a military man throughout his life and undertook lengthy service for the duke of Burgundy. He was governor of Picardy and Artois for which he received a salary of £3,000 per annum and he made a Knight of the Golden Fleece in 1468. He commanded the Burgundian army at the siege of Beauvais in 1472 and is known to had been at the battles of Grandson, Morat and Nancy. After the death of duke Charles he entered the service of the French king and fought at Guinegatte. He was made Marshal of France by Charles VIII in 1486 and campaigned in the wars against Maximillan. At the age of 72 he was one of the signatories to the Treaty of Etaples in 1492 with Henry VII of England, following the latter's invasion of France. He died just before the French invasion of Italy in 1494. 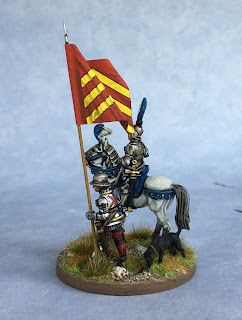 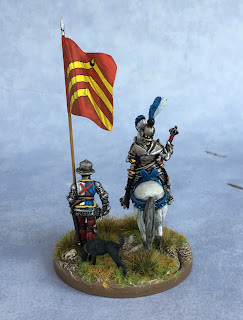 The model uses Perry metals on a Warbases sabot-style base. Philipe de Crevecoeur has had a headswop for a plastic open visored sallet and I've attempted to add something vaguely resembling a Golden Fleece on his chain. The flag is from the same source as the previous captains. 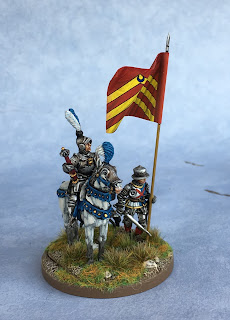 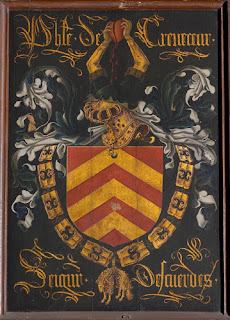 The second captain all done - this is Nicola de Montfort, Comte de Campobasso, an Italian condottiere from Naples who was employed by Charles the Bold from 1474, along with two of his sons and 400 lances. 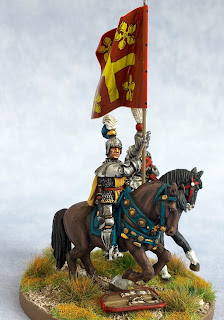 Campobasso was conducteur of the 16th Ordonnance Company and is noted as one of the main commanders at the siege of Neuss, although he became ill during the protracted campaign and was replaced. It appears that Campobasso had a turbulent relationship with his employer - by the battle of Morat in 1476 it was his sons who commanded the 16th Company, as Charles had dismissed Nicola from his employment. However by Nancy in 1477 the Comte was again leading the Company.  Perhaps anticipating another Burgundian defeat he deserted prior to the battle to the Lorrainers and took no part. 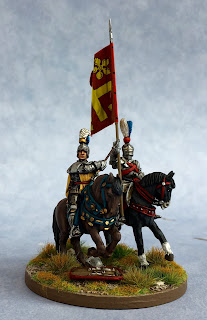 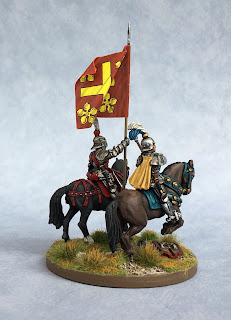 The figures are Perry metals again - I've done a headship on the figure of the Comte, for a plastic one and replaced the baton with a mace. Again the models are on sabot bases, so I can do a bit of juxtapositions with them, when they're all done. 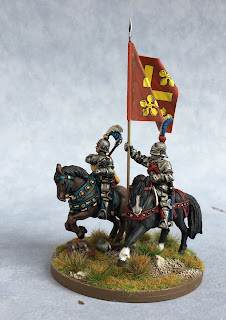 Ok, so I did say that my focus will now be on Swiss...
...however, I recently came across some very nice flags free to download via the Lead Adventurers Forum, which includes some Burgundian leaders. I then realised that I've enough castings to make stands for some captains - using the Sabot-style bases I had from Warbases. So four new captains are planned and the first one is done. 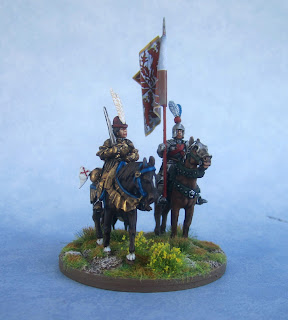 This depicts Jacques de Luxembourg, Signeur de Fiennes. He was born 1443 and made a Knight of the Golden Fleece. He was present at the battles of Grandson, Morat and Nancy and died 1487.  His coat of arms, made of silk and captured at one of these battles, remains today in the city museum of Solothorn in Switzerland. The figures used are Perry metals of Edward, Prince of Wales and a WotR man at arms. 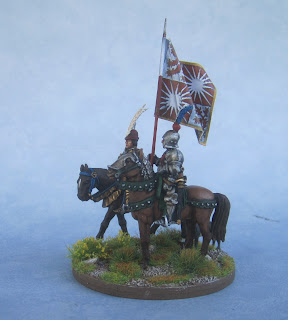 I'm sure that there's so many of you who have been losing sleep from thinking about what happened to a pavilion build which I started in 2014 for a Burgundian Captain, ...and you've all been too polite to ask! Well, I can sate your ongoing curiosity and provide an extremely belated update. 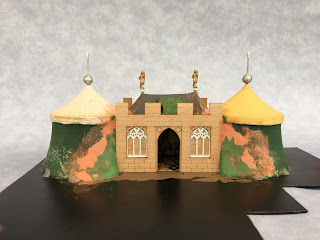 To briefly recap, this is a composite model which is not directly based on any contemporary illustration, but is an attempt to create a possible pavilion used by higher status Burgundian captain. Since 2014 I changed my plans from a completely canvas tent to one which is a combination of canvas tents and prefabricated wooden sides. The next step was to get the wooden sides done, which James from Oshiro Model Terrain laser cut from thin plywood, to accommodate some pre-cut gothic window frames in HO scale from York Model Rail. The canvas roof of the middle section is from a Curteys Miniatures tent, on which are Madonna icons made by Noch for model railways.

After assembly of the parts, I've filled in all the gaps with putty (using Green Stuff, Procreate and Das), so that we're now at the stage for an undercoat and painting. Before the sides were attached I had to complete the internals of the tent which can be seen through the open entrance. These are printed images of a tapestry ('Hercules Initiating the Olympic Games' from the Burrell Collection, Glasgow) hanging on the side and a carpet of the arms of Burgundy on the floor (from my photo of an original hanging in Thun Castle). You can see these a little more clearly through the doorway on the actual model, than I can replicate on the camera.


Once I've painted the canvas I'll add extra horizontal panels around the joint of the roof and sides which will have printed Burgundian mottos stuck on (taken from printed flags) and some guy ropes. I'm thinking whether the entrance needs some simple wooden fencing around it, just to deter any folk of lesser social status from barging in? I'll then complete a base with some figures, as well as encampment bits and bobs around it. Or perhaps I should wait and hope that the Perry's create some 28mm Swiss looters??

This is a model which I've never been quite sure how well it'll work out, since I came up with the design idea - an unusual and convincing piece for the camp, or just a bit naff and odd - hence it's sat to one side for so long. Hopefully it won't be another 2 years before I find out which one it is.

I am about to start in earnest with my Swiss Confederation army, circa 1475. The bulk of the troop types will be pike or halberd armed. Using the Swiss Chronicle illustrations as a key guide, it appears that at least the front ranks of these units frequently wore full harness. 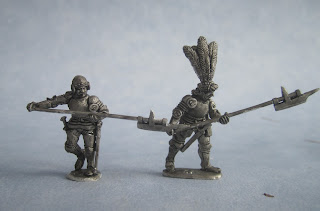 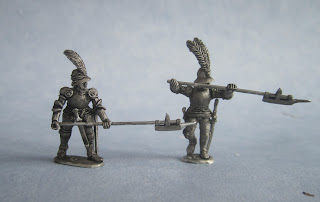 So when considering what figures to use, I realised that relevant figures wearing with full armour and holding polearms were a bit scarce. I tried adapting some Perry plastic foot knights - however after drilling out the hands to add pikes I was concerned that they were a bit brittle, with a risk of future damage. So the solution has been to commission a couple of figures, open-handed in advancing poses, to use as Swiss front rankers.

The figures has been designed by Oliver of Steel Fist Miniatures. Oliver is a first class figure sculptor in my opinion and improving all the time. He has a deep interest in armour (both Western European and Japanese) and an appetite to sculpt it with great accuracy. His style also compliments the Perry figures very well.  With lots of assistance from Oliver's experience of casting etc, the outcome are figures and arms which can either be used on their own or alongside Perry WotR plastic figures, by swopping arms and heads to maximise an array of poses. 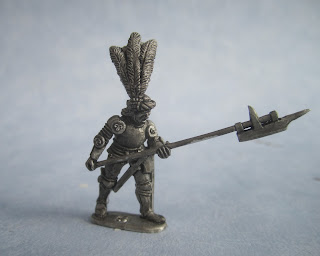 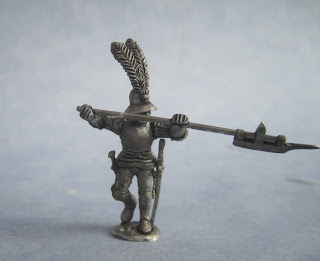 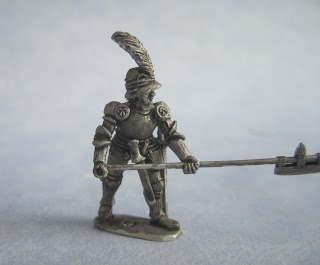 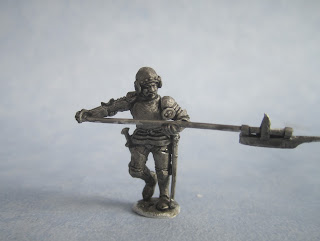 Oliver completed the sculpting in a very short timeframe and I've been waiting for moulds to be made at Griffin. Here are pictures of the castings I received this week. I have ended up with two bodies in full harness, four pairs of open-handed arms and  four heads (these are pretty generic for any late fifteenth century well armed figures). I also have a halbard (again commonly seen in Chronicles) and a baselard short sword. The helmets aim to extend the styles of Swiss troops seen in the illustrations shown below. The pairs of arms should be useable on either body (with a tiny bit of filling).

My assumption is that these would have been the most wealthy and prominent from urban areas of the Confederation, whose social status put them at the front of the fighting. In fact, full harness is also shown by Swiss using handguns in images of sieges - perhaps the same individuals taking prominent roles here too?


These castings have had a wash of black on to show the details better. I have plans to personalise the figures a little more - by adding items from putty, such as mail sleeves, bends, hoods, plackart, tassets, etc. No two figures the same is my aim - must be on the verge of madness methinks!


I'll get some painted up very soon.