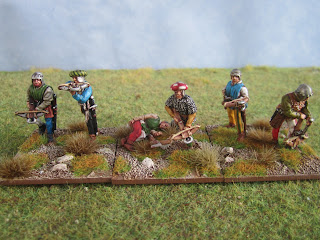 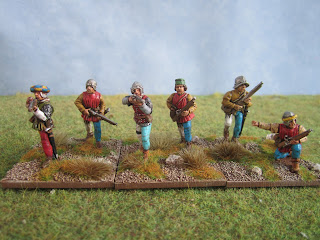 I've completed and based a couple of later 15th century Italian skirmishers. These have been done using my 'speedy process' (see previous posting) and were completed a couple of weeks ago, but as I can only take photos in natural light at the weekends in the English winter they've been slightly delayed in their arrival here. I had to add a casualty figure as I'd already 'borrowed' the crossbow for the other figure in the pack and spares didn't fit well.
They have been based in the usual way, on 'Warbases' laser cut mdf, the only change being applying Vallejo Beige Brown as the earth colour, to lighten it slightly for a Tucsan setting. The overall frontage for the 3 bases is 120mm, for potential use with 'Impetus' rules. Closer fighting units will have either three or four figures on these same base sizes and mounted units two figures (on deeper bases).
They have been sprayed with a matt varnish and I'm pretty happy with them for what they are - a way of getting an army together in quicker time. I reckon my usual approach would result in about 2 figures completed in the time I did these twelve; so completing a small scale Italian city state force is potentially doable within a reasonable timeframe, i.e. before some future new figure releases distract me! 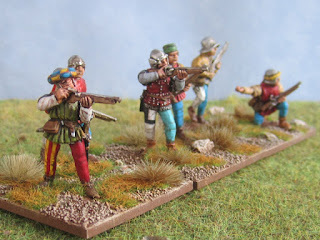 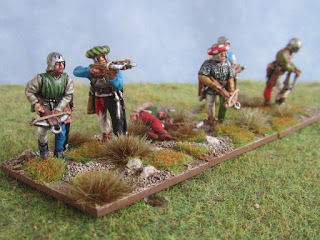 I'm going to use this painting method - using a mix of washes rather than Army Painter as I feel I get more control re applying the levels of shading - for more Italians as well as some more HYW on my other blog.