WIP - Wars of the Roses 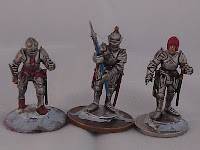 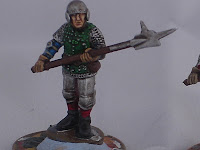 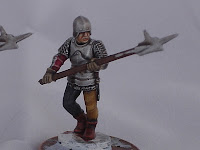 I feel obligated to update the blog, so these are only some WIP shots. I've also bought myself a cheap lightbox, so I wanted to try that out too.
These are a few of the Perry plastics that I'm working on for two Wars of the Roses games planned for this year. As both require a large amount of figures to be done (large that is in relation to usual output) the dip-and-highlight approach is being refined. I'm now using both Dark and Strong tones of Army Painter selectively; although I'm a bit concerned that the Dark is too dark and tends to flatted colours after a matt varnish is applied, but it does look very effective on the armour IMHO, so I intend to continue with it. The key appears to be to use very light base colours, pre dip, to compensate. The good news, I keep reminding myself, is the quick pace that the painting conveyer belt is moving along and that basing up with improve the overall effect when they're on the table. These are gaming figures and not ones for close examination in the collector's cabinet.
Above pics are fom Earl of Devon's contingent for a 'Salute' game; the completed unit will be a body of household men at arms and billmen, with two 'sleeve' bases of longbowmen. I've drilled out the hands for flags on metal rods, partly as I do have a slight concern with the plastic ones snapping one day, but mainly as I will 're-cycle' these as alternative units for the Northampton game via a swift change of flag and standard. That said I'm hoping to get some waterslide decals made up with livery badges on, so hope no-one will be too eagle-eyed to spot this! The retainers wearing livery coats are therefore patiently awaiting arrival of the decals before a brush on of dip.
Posted by painterman at 07:34 6 comments:

Labels: wars of the roses, WIP 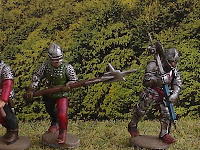 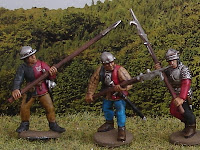 Ho hum, there I was on the straight-and-narrow, making a good start to my Burgundians when I go and get distracted!
These are some test figures for a potential demo game later this year, not yet definetly fixed up, for the 550th anniversary of a Wars of the Roses battle that's near to where I live. I need to see if I can possibly create at least 300 figures to a decent standard, in a few months, for both armies. Given the limited free time I'll have, I've tested a dipping approach - well, to be accurate a brush-on of 'Army Painter' dip.
The figures were white-undercoated and then the main colours blocked in, in shades that are much lighter than I would normally do, using the mid & light shades in the Foundry triads for example and the black clothing was painted as dark grey. I've then brushed on 'Dark tone' dip. The non-armour areas have been matted with Humbrol Matt Cote. This dip tone seems to work really well on the armour, pooling in the right areas such as the helmet rivets and joints in plates and giving a nice worn-steel finish. Where I'm a tad concerned is on darker clothing, which get dulled and there are no highlights post-dip. Also, from previous experience, the dark tone is too strong to go on whites. I may therefore use mid-tone on clothing and dark tone on armour?
Overall, the speedier process may just allow allow me to get these done, with an acceptable level of detail (thats already in the figure castings) brought out by the dip.
More test figures needed me thinks. 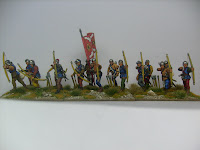 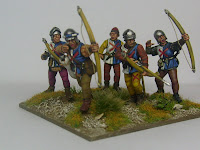 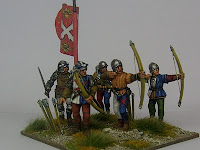 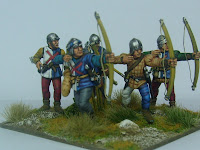 Every (snow) cloud has a silver lining!

As I can't commute to work I've completed my first Perry plastics - 3 bases of bowmen, based on 60mm squares, which I'll combine in either twos or threes as fighting contingents on the table. I’m pleased with both the raw figures and the results. As per my previous blog entry, I’ve added wire bowstrings to all and scarves on helmets to some. The flag is a ‘Dansk Flag’ free download; these are particularly fine flags for the Burgundian range, but if I use more of them I’ll have to access a better quality printer to do them justice.

I’ve read a couple of reviews of the plastic ‘Bills and Bows’ box which have been a tad mixed in people’s responses to them. Apparently some have experienced prominent mould lines or small depressions in the plastic on the backs of the bodies; I’ve checked all my boxes are they appear fine. It’s impossible of course to avoid mould lines completely and most are easy to remove with the side of a new scalpel, the ones which are noticeable are on the legs and front of the bows. The hardest to clean are those running across some of the helmets, where if you’re not uber careful the fine detail of the rivets, that hold the helmet linings, can be lost – I’ve used a fine needle file here.

What you do get, for only £15 we should remember, are some beautiful, historically accurate and finely detailed figures, and the small amount of extra time required for gluing and preparing, provides you with loads of variants (and there are metals to come). I think for many, perhaps used to painting metals from other designers where undercuts are deep and belts etc sit proud, the detail on these can be too fine and hence trickier to paint. I’m wondering if the best results with this range maybe to use more washes and let the detail do the work for you, particularly on the faces, belts and folds on the jacks (the latter being where I have used a wash followed by a hand painted highlights)?

Another ‘issue’ to deal with is their lack of weight. I’m sure this is 80% a psychological response, as we’ve all been used to metal figures for so long now, and 20% a practical one, as the bases may tend to sit lightly on terrain etc. I did glue all of these onto small washers, to try and add some weight, but frankly you can hardly tell when you pick them up and it creates a deeper base to cover with filler and sand etc. I don’t think I’ll bother again and just accept it – hopefully most future bases will have at least one of the forthcoming metal castings on them anyway.

Next up on the bench are more archers and then some Ordonnance halberdiers.
Posted by painterman at 05:20 6 comments: