This is just a quick post betwixt Christmas and the New Year. I thought that this period must have a name, but it appears not. So I thought that the 28th of December would have a medieval Saint's day that I could use for the title of this blog entry, but suprisingly it's one of the few that doesn't. So lets just say it's a betwixt day - one to look forward and back on (a little Janus-like).
So, looking back - a good Christmas Day for family and friends. Personally I was delighted to unwrap some books that were on my Santa list. These included the catalogue from the 'Splendour of Burgundy' exhibition of 2009-10, which despite being in three cities over many months , I'd (regretably) failed to get to. The catalogue is excellent and indeed more than just a list of the items nicely reproduced in colour, as it includes some short essays on the Burgundian politics, court and art, as well as many items that I've not seen before. 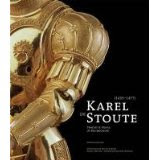 Second up, the Calais Garrison, which seems (until now) to be a suprisingly neglected topic, but I think this book will fix that. Was lucky enough to make use of a 40% off one-day deal at the publishers when getting this one, as academic books are almost priced by the page and so out of reach for a casual purchase.

Finally, a visual treat and very useful reference for north european dress and armour in the last quarter of fifteenth century, the Beauchamp Pageant.

Looking forward, I now have opened the first boxes of Perry 'Mercenaries' and they do not disappoint; the castings on the crossbows, handguns, new heads and especially the two new captain figures are truly fantastic.
New heads are now being added to longbowmen from the previous box, to add variety. These are now my WIP on the painting table. Planned for the short term are Burgundian Ordonance longbows and handgunners. Also a group of dismounted men at arms; I keep picking up the sprues each time to consider different options that could be obtained with a swift cut of the scalpel, filler and glue - am sure others will find better ideas that I will.
Here's to a peaceful, healthy and prosperous 2011 to everyone.
Posted by painterman at 12:24 3 comments: