Just finished painting nearly all the bits and pieces of camp ephemera that will be placed inside and around the tent. A goodly selection of foodstuffs being prepared! The woodwork is actually grey and not the tone of blue that's been created by my camera used under the desk lamp. 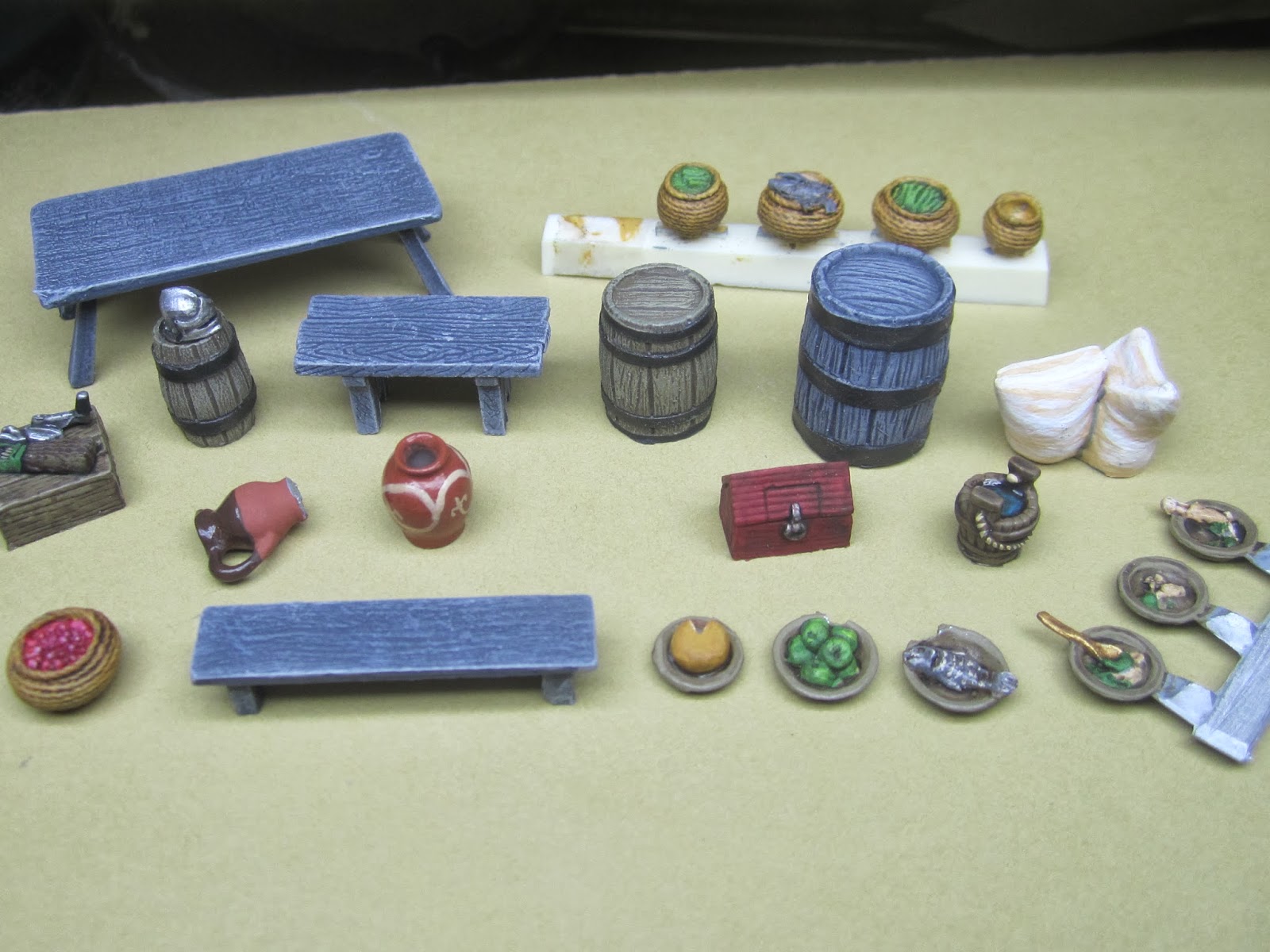 Plus the soldiers and camp follower for in the tent (and a scavanging cat, who'll will be sniffing at a plate) are nearly done too. 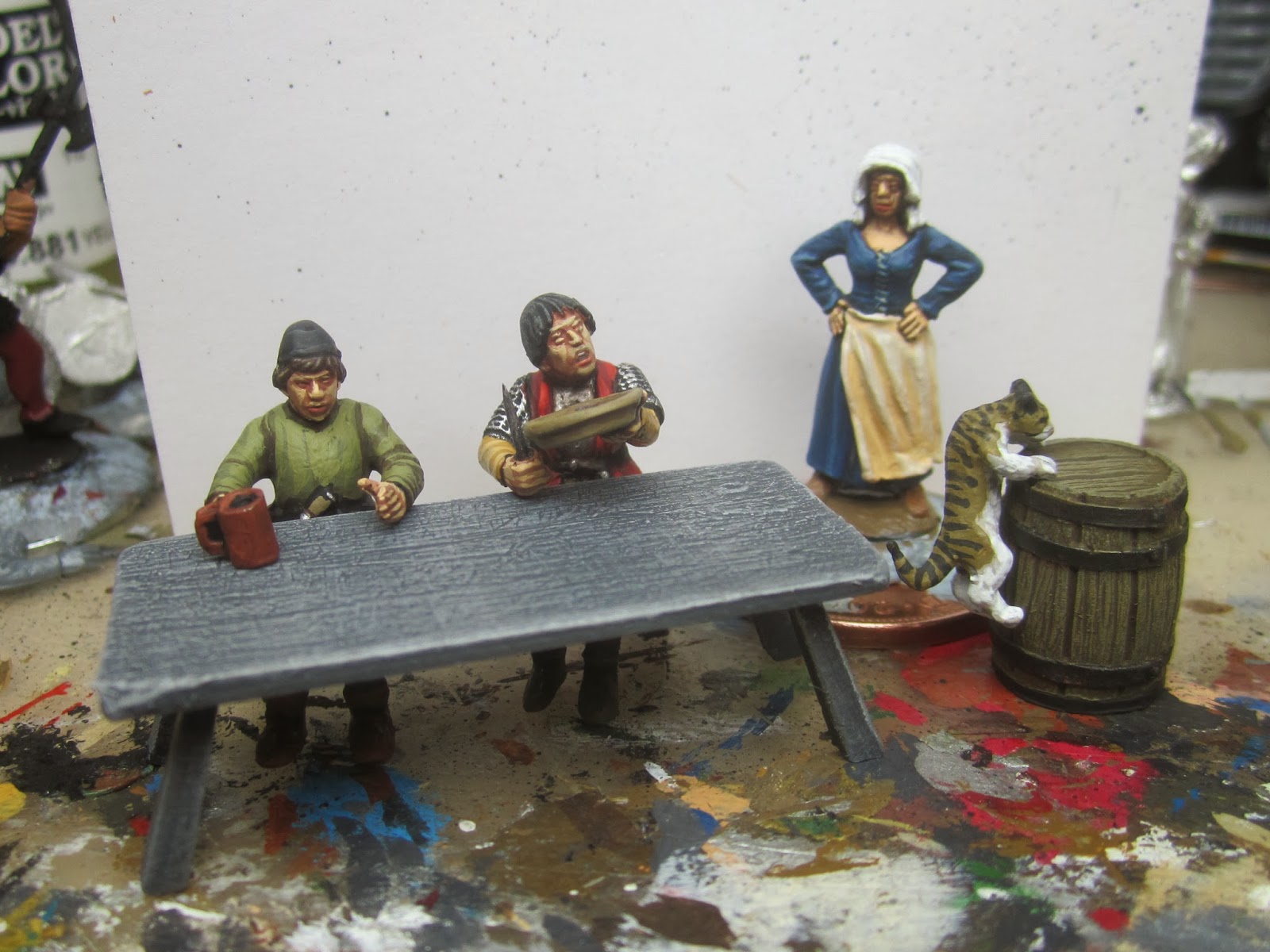 Several Swiss and Italian medieval illustrations show encampments with open-ended tents; basically canvas sheets laid over three simple pre-fabricated wooden frames. These appear to be used for either storage of items from the weather or as an accessible area where foods were prepared and possibly served from. So I thought my encampments ought to have one too. 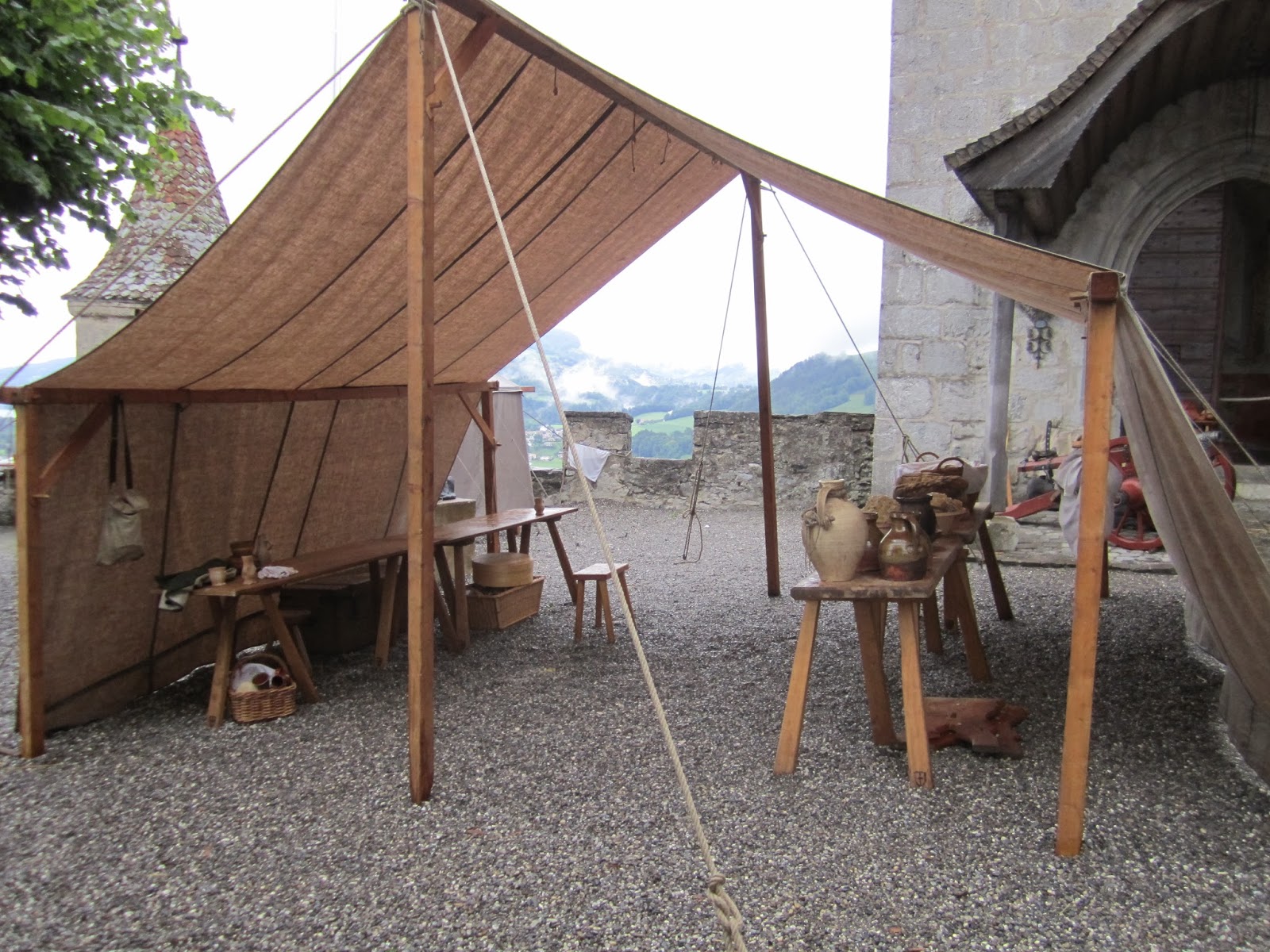 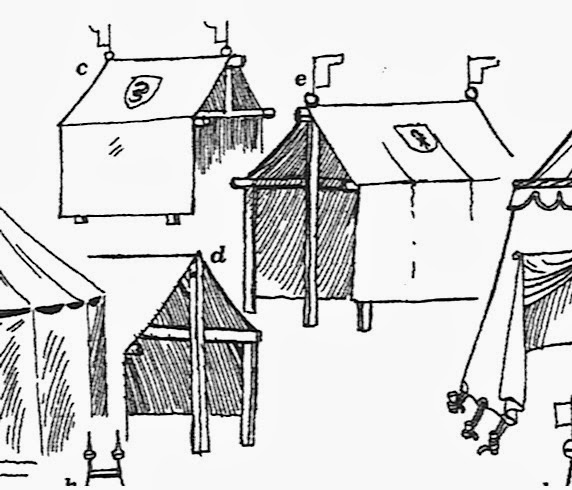 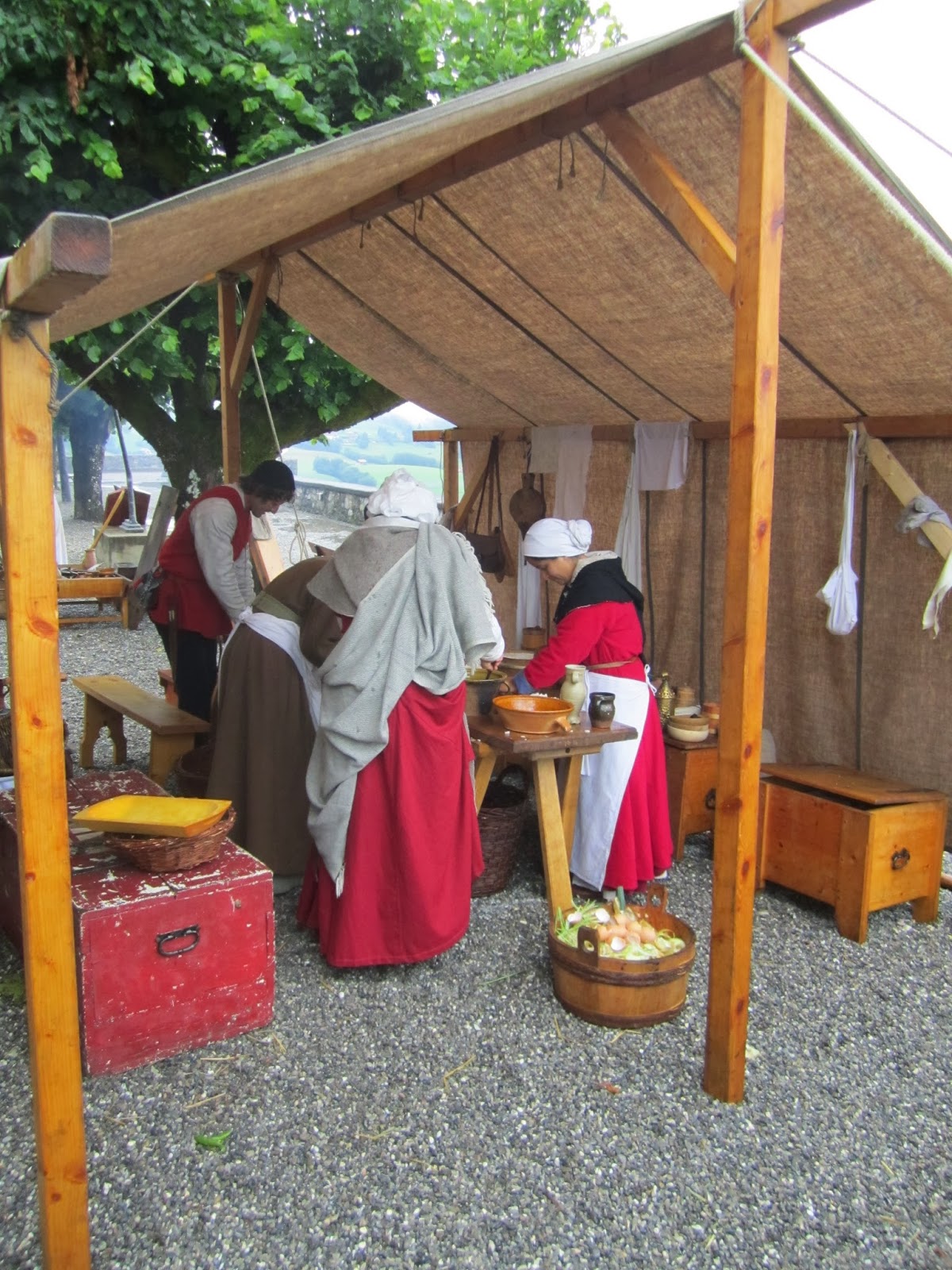 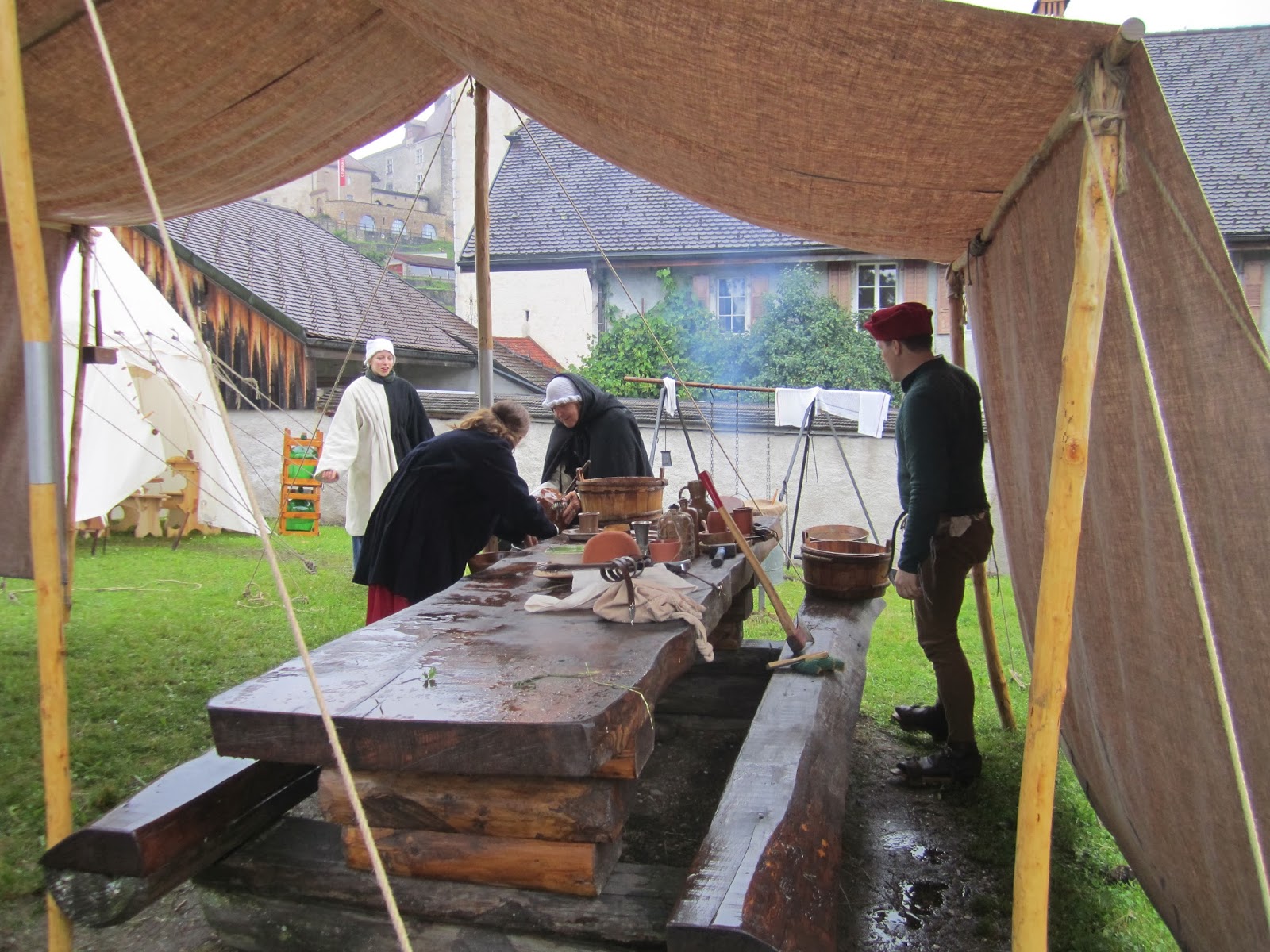 These images are from the Companie of St George reenactment group in 2011 and Gerry Embelton drawings (copyrighted) taken from Swiss Chronicles.

My work to date shows the timber frames cut from bass wood and I plan to add canvas made from thin pewter sheeting. I've assembled basic furniture, boxes, sacks etc from various manufacturers and have some nicely sculpted plates with foodstuffs from Mirliton. So lots of fiddly items to paint. Of course all this internal detail will be slightly obscured when the plain canvas cover goes on! 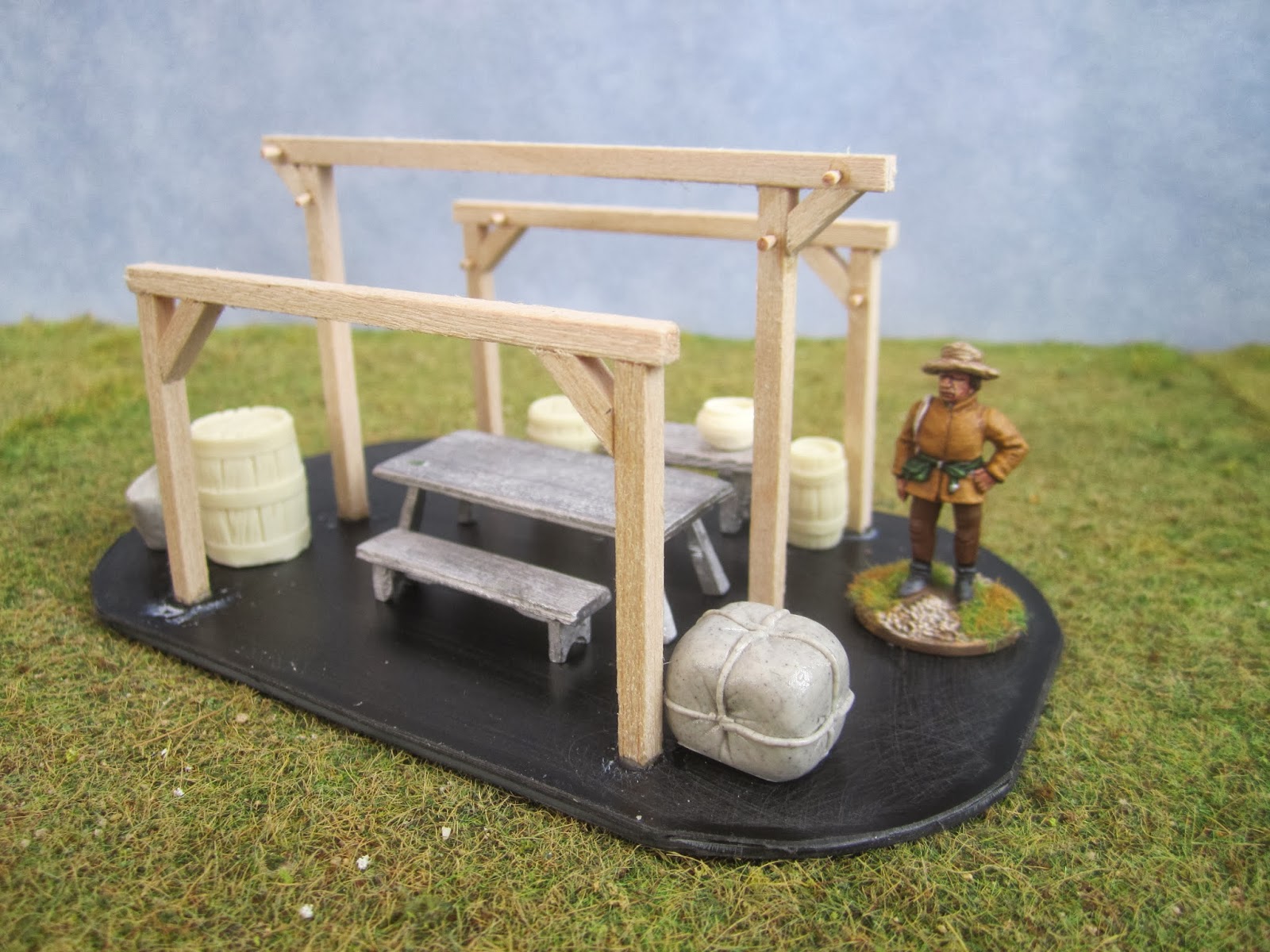 I've also started an attempt at creating a couple of chaps to sit at the table - using cut-down Perry plastic bodies with added bent legs. Early days on these - just started bulking out the wire legs - although already the thighs look too long, but they'll be hidden under the table, so I may just get away my poor sculpting!! 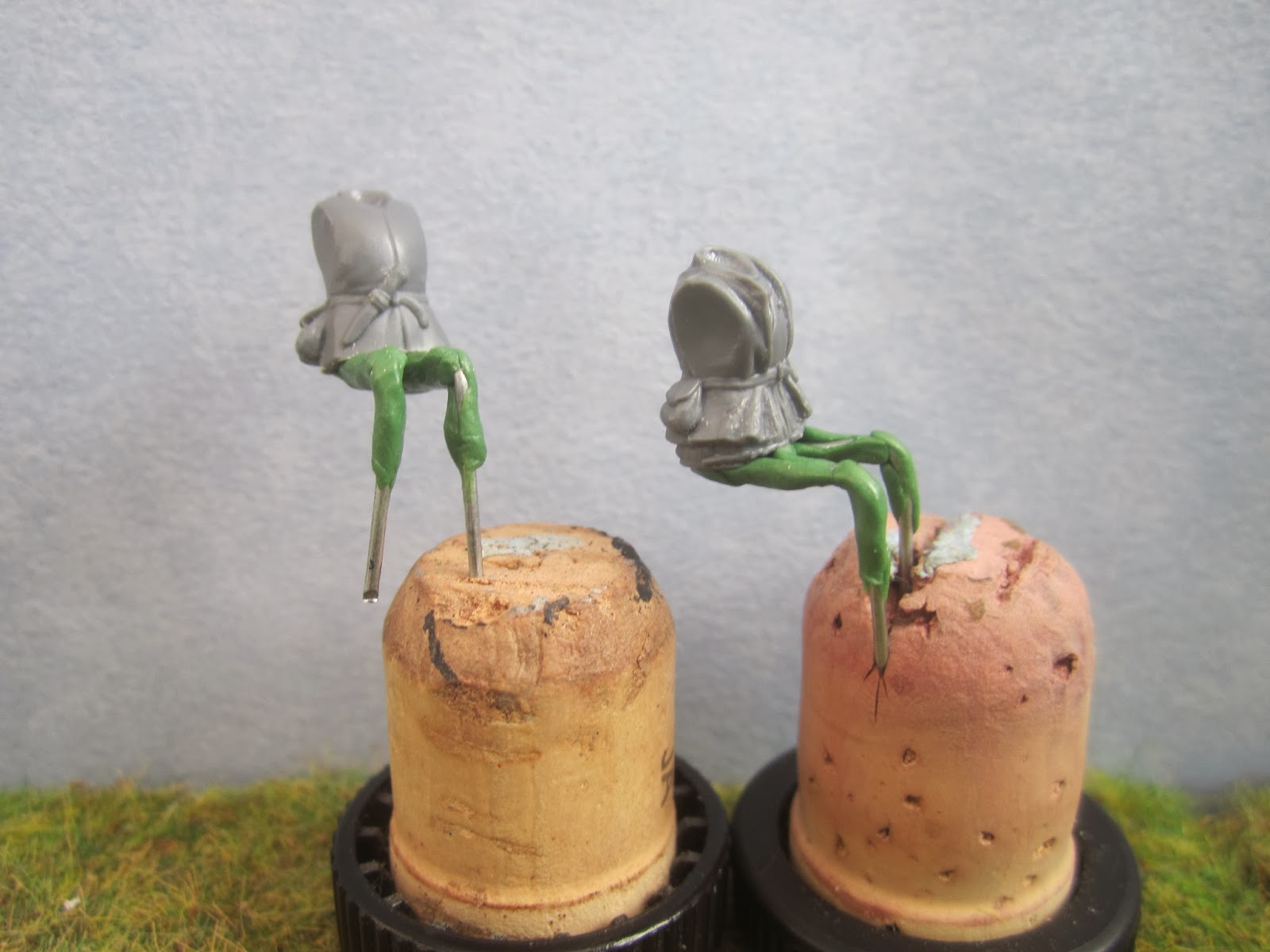 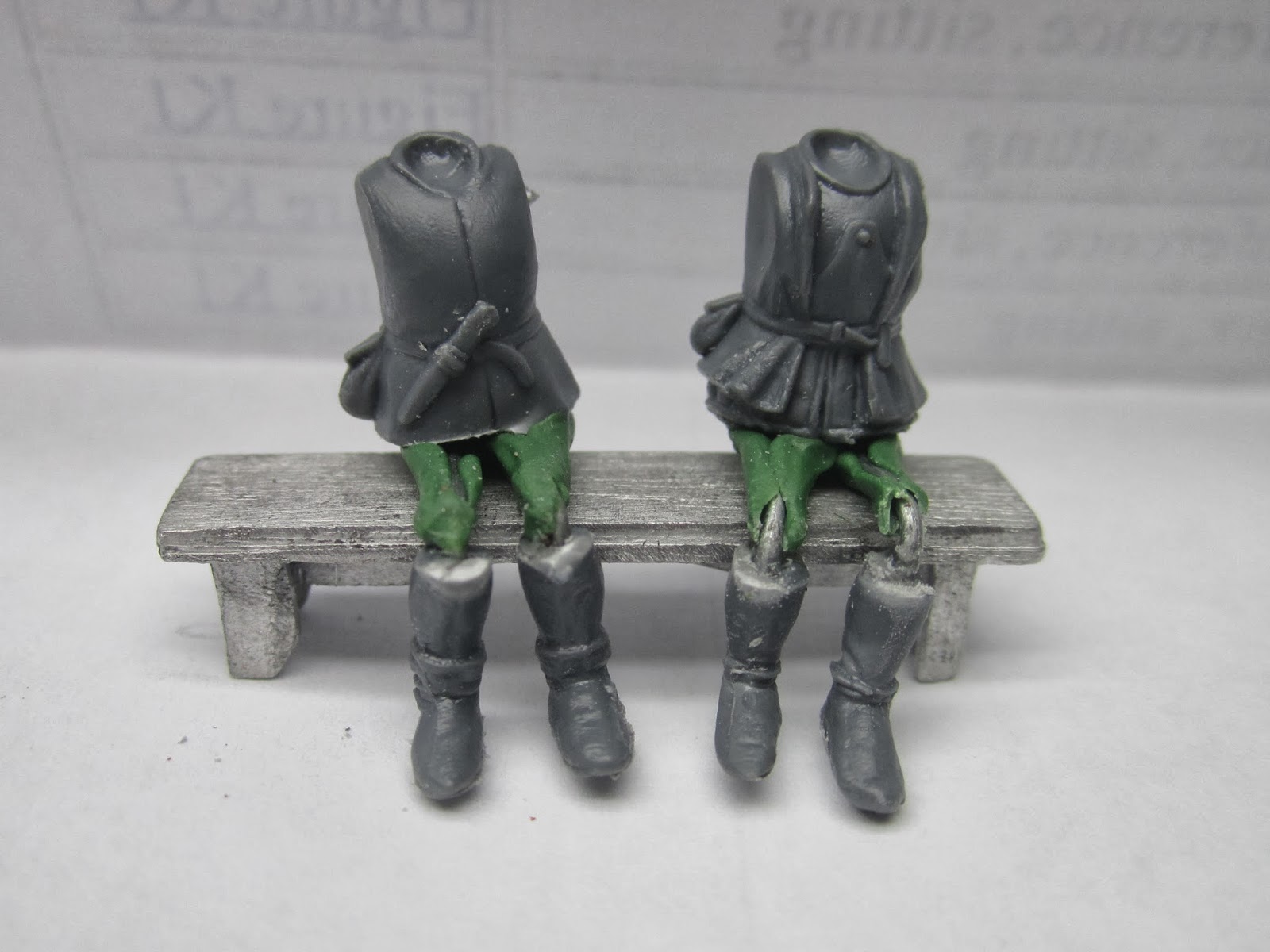 I'm planning to sell my OLD collection of Charles the Bold's wargames army, plus the smaller units of Swiss that I did in the late 1990s. These are comprised of the great and very varied 25mm Citadel (now Wargames Foundry) range that the Perrys sculpted. The sale is to fund other historically-based hobbies and I've got to a tipping point with my more recent Burgundians and Swiss collections.

They're planned to go on ebay at the weekend. A couple of pics to whet any appetites (I have taken more pictures for the ebay sale - I'm yet to photograph the Swiss.). Below is the draft entry for the sale. Should anyone here be interested, then I'd be happy to discuss further. My email for this is simon.chick@tesco.net  I've added new flags to all the men at arms.
Note that these figures need to be collected/handed over - they will not stand a postal journey! 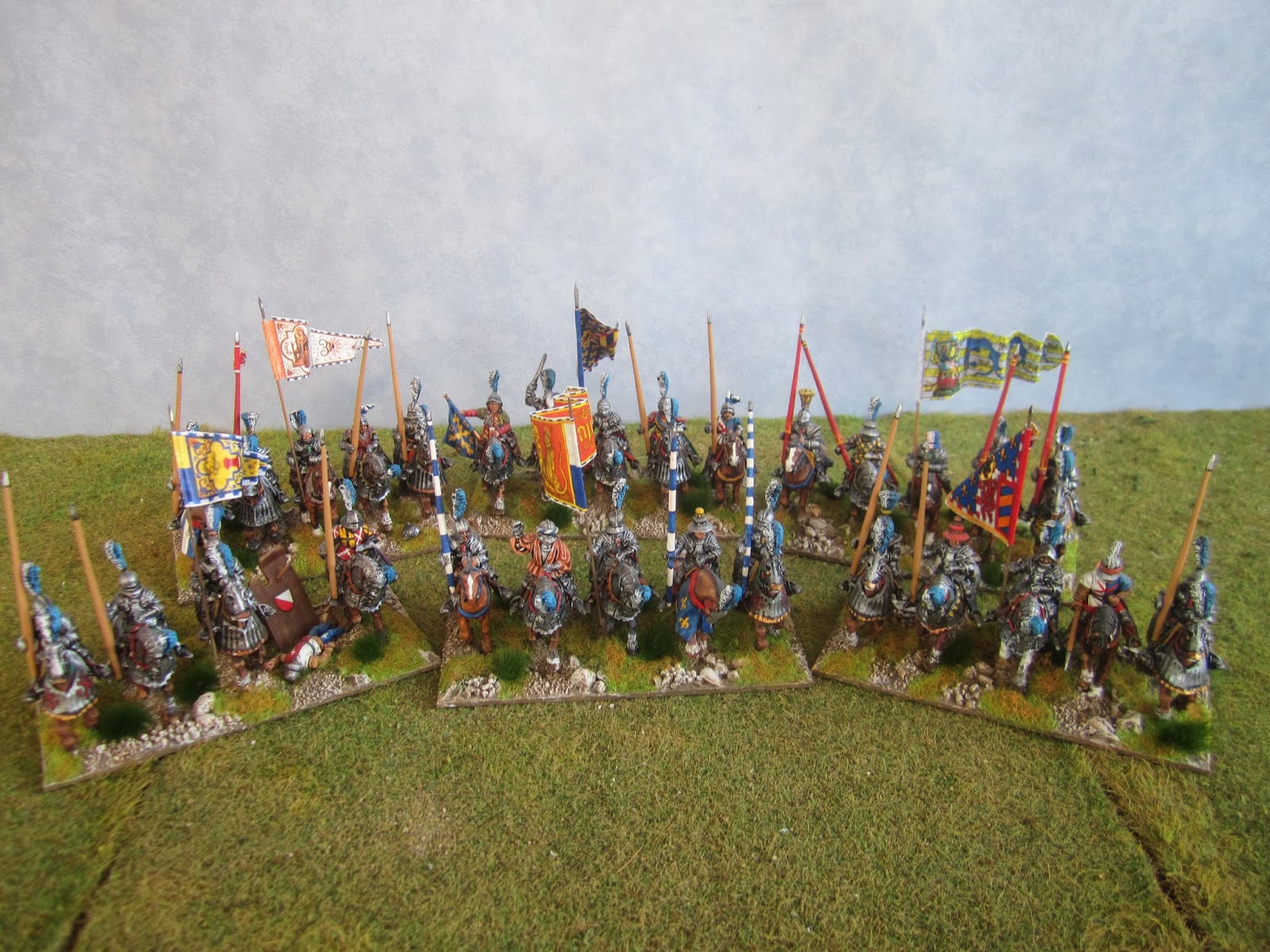 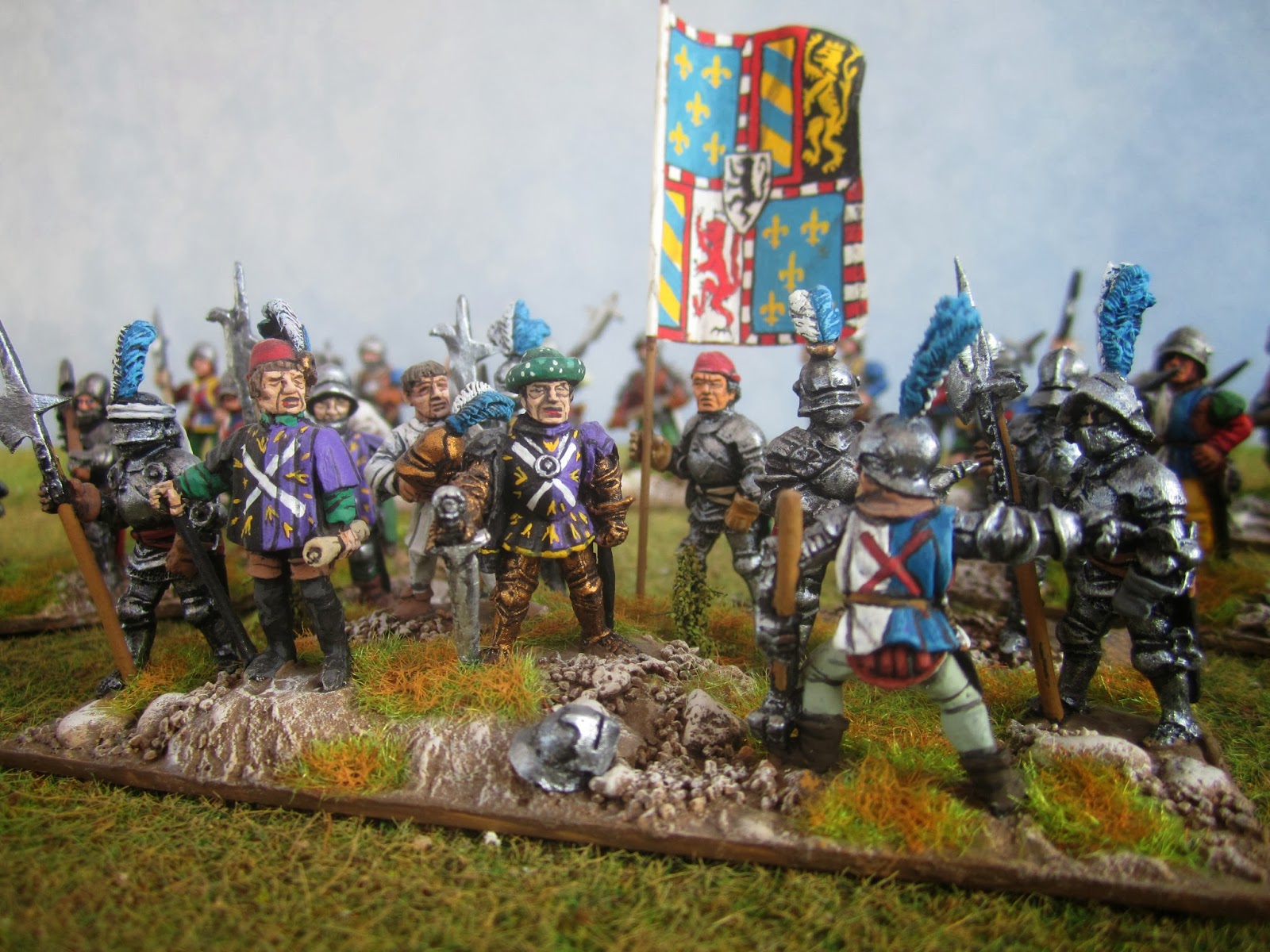 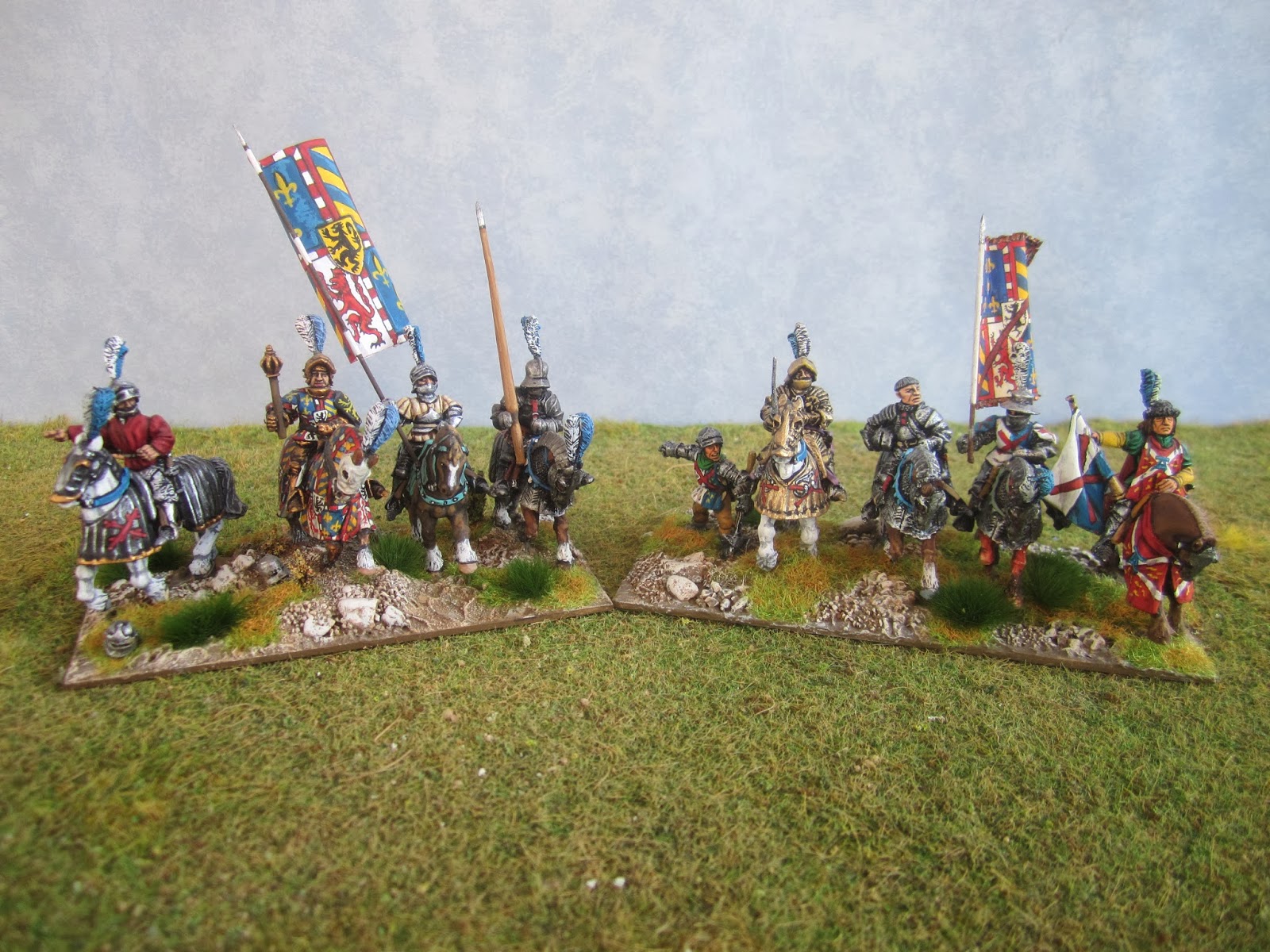 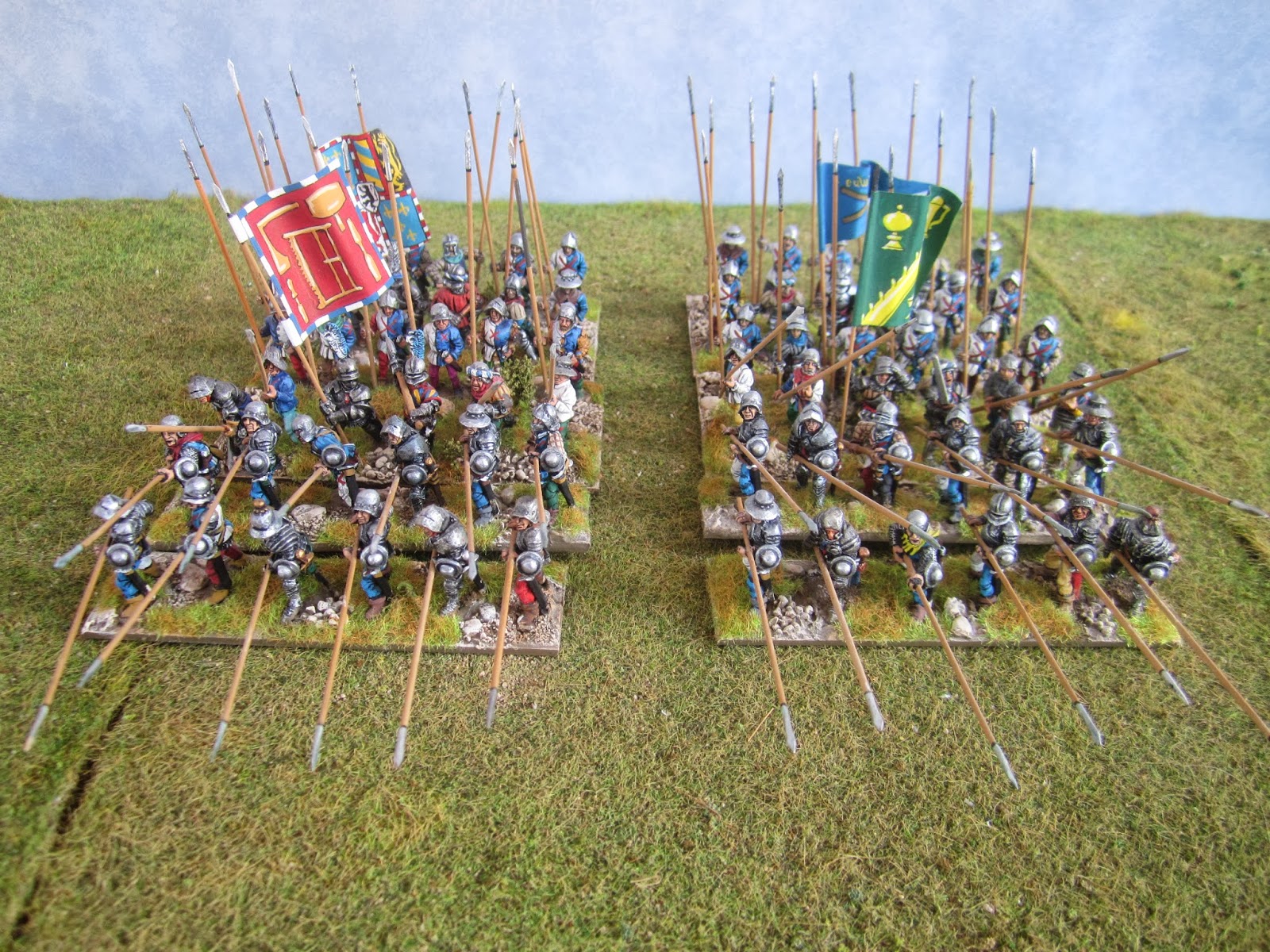 A complete 28mm army of Charles the Bold’s Burgundian Ordonnance, for his battles and campaigns from 1465 to 1477.

All figures have been painted by me and collected over a number of years. Elements of this army have featured in photographs in ‘Wargames Illustrated ‘ magazine.  Figures are from Wargames Foundry/Citadel and designed by Alan and Michael Perry. They are painted and based to a high collectors standard and mounted on plasticard or plywood. Flags are a mix of printed or hand painted.

This is a unique collection, which is being sold to fund other historical-related interests. The opening bid price represents an average cost of less than £3.00 per figure and less than £5.00 per mounted figure.

Total of 78 mounted figures and 212 on foot (exc artillery crews).

All bases are 100mm wide, with varying depths dependent on the types of figures. This is ideal for rules such as ‘Impetus’, but they could easily be rebased for other rulesets.

IMPORTANT  - PLEASE NOTE THAT THIS COLLECTION NEEDS TO BE COLLECTED BY THE BUYER!!
This collection is not going to withstand the vagaries of the postal system and would most likely suffer damage. Therefore the agreed sale is on the basis that THE BUYER COLLECTS (from NN7 in UK) or I will travel up to 50 miles from NN7 to meet and hand-over the figures at a mutually convenient date. Consequently I regret that I cannot offer this sale to non-UK buyers.

Phew, I've finished the painting of the rear ranks for my Berne pike block. 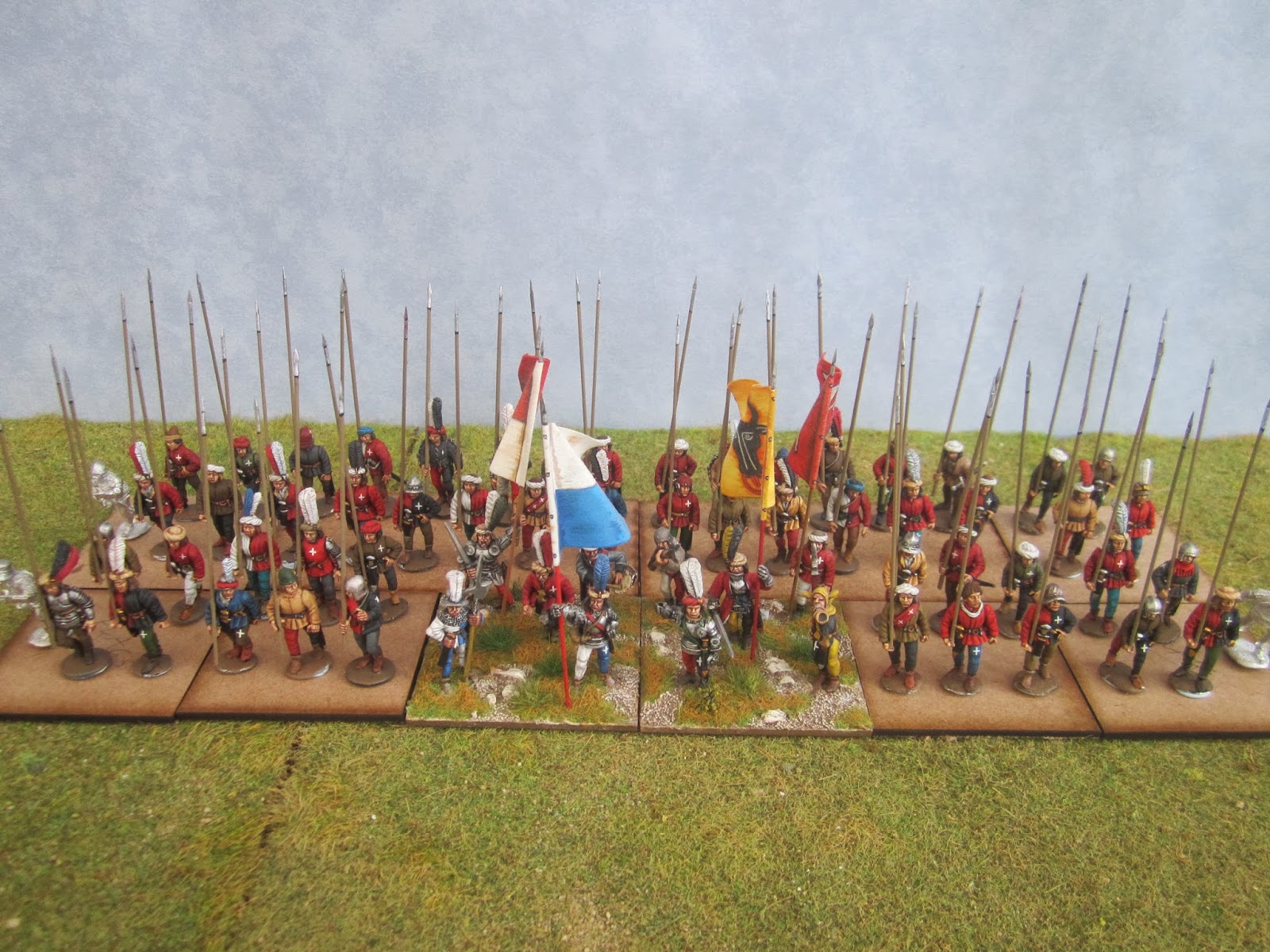 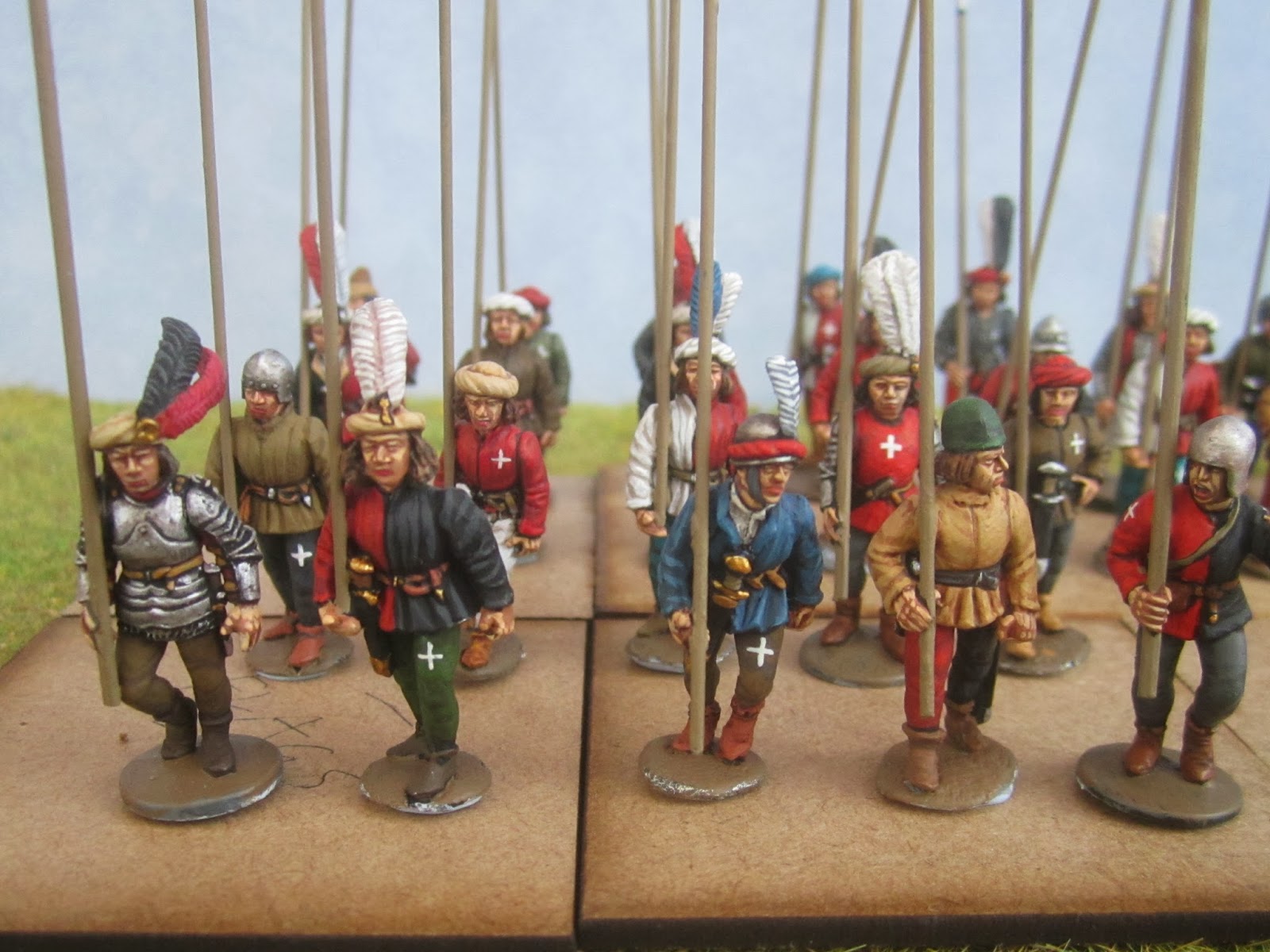 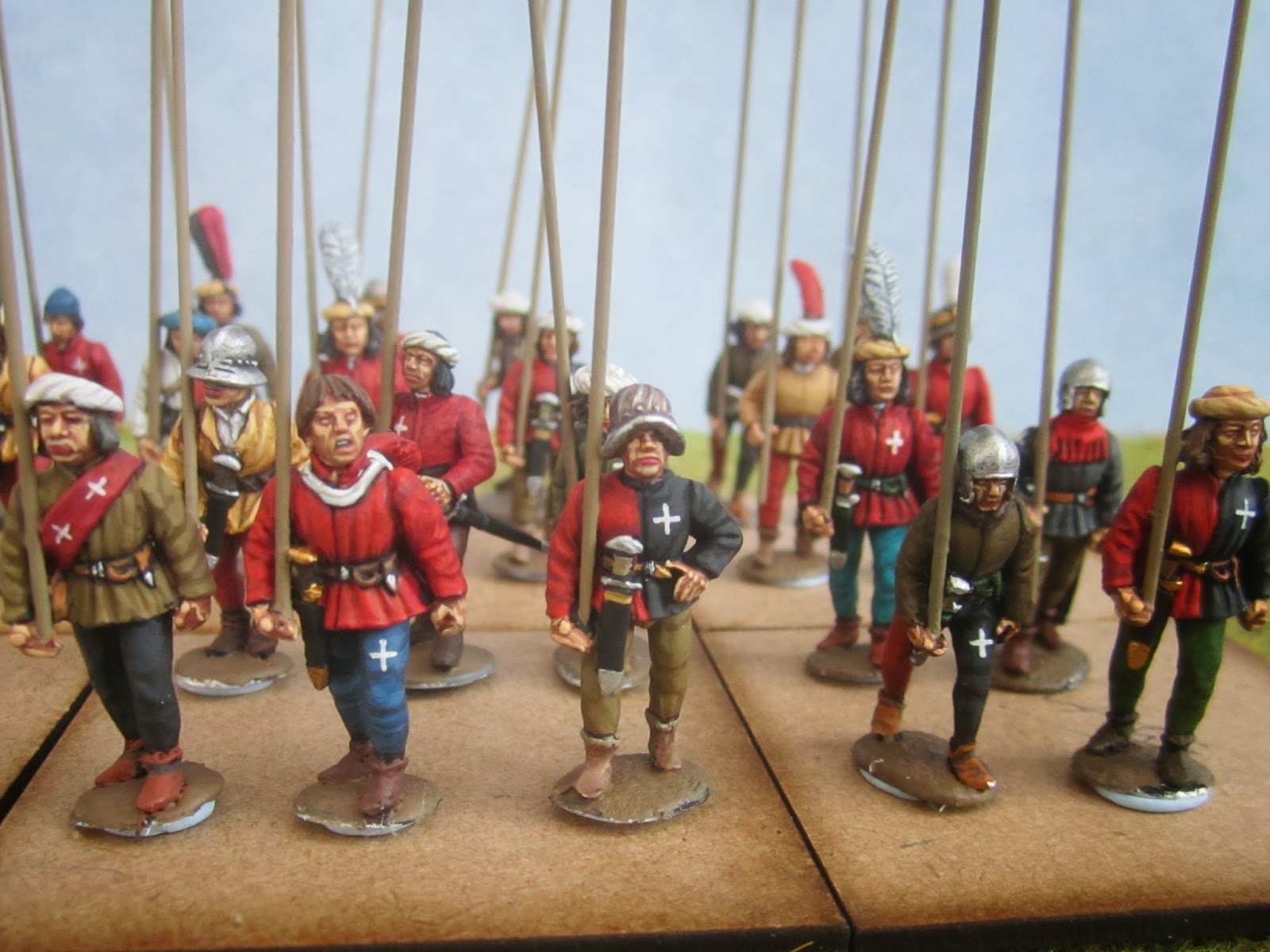 A total of 52 figures done, with a mix of colours but with an attempt to show a predominance of red and black to visually 'key' them together. The models have some elements of conversion (about a third in all), mostly head swops on the Perry Swiss EA1 pack of metals with a few plastics to add variation. Perhaps a few more figures wearing helms are needed to be added? 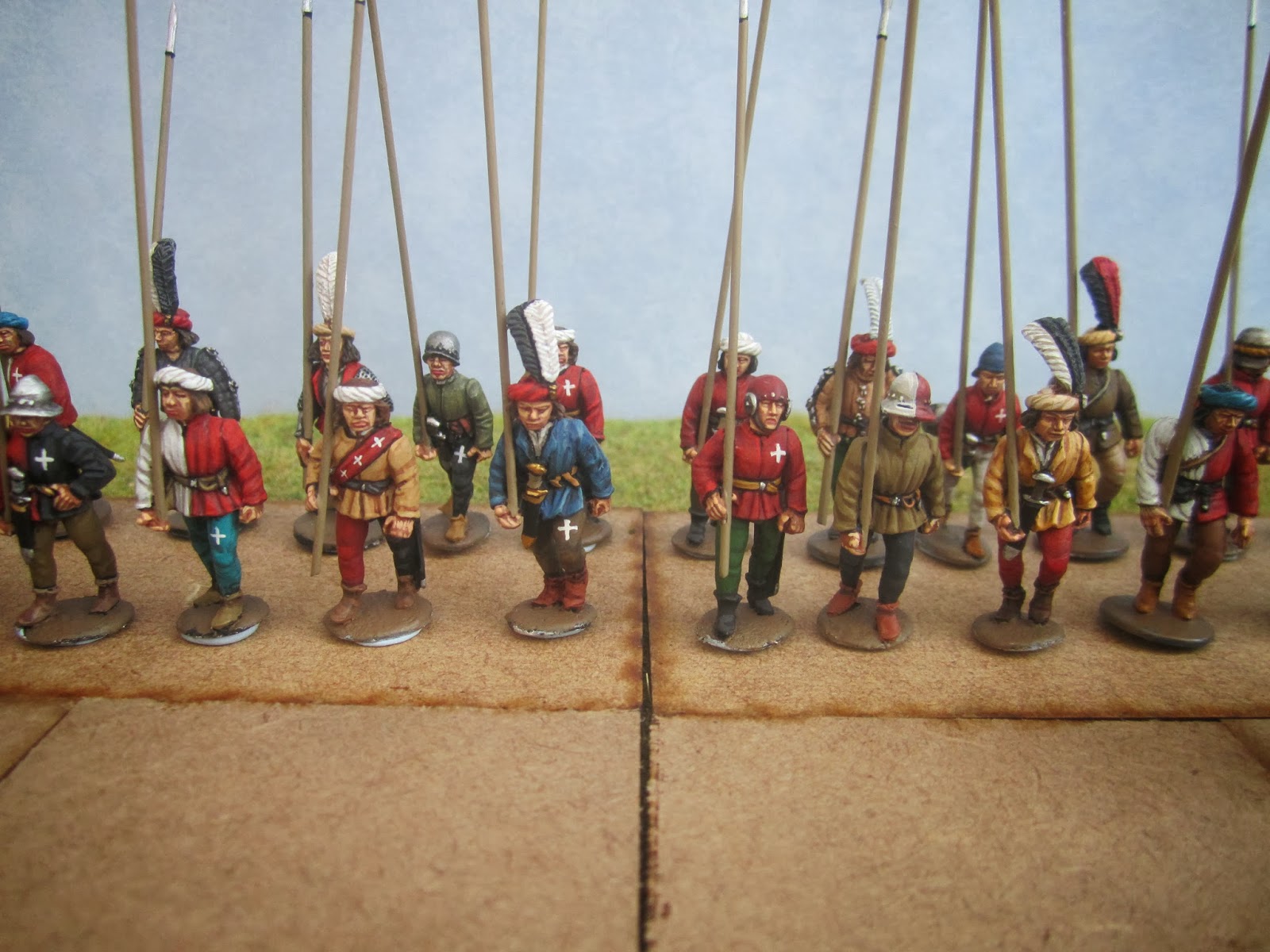 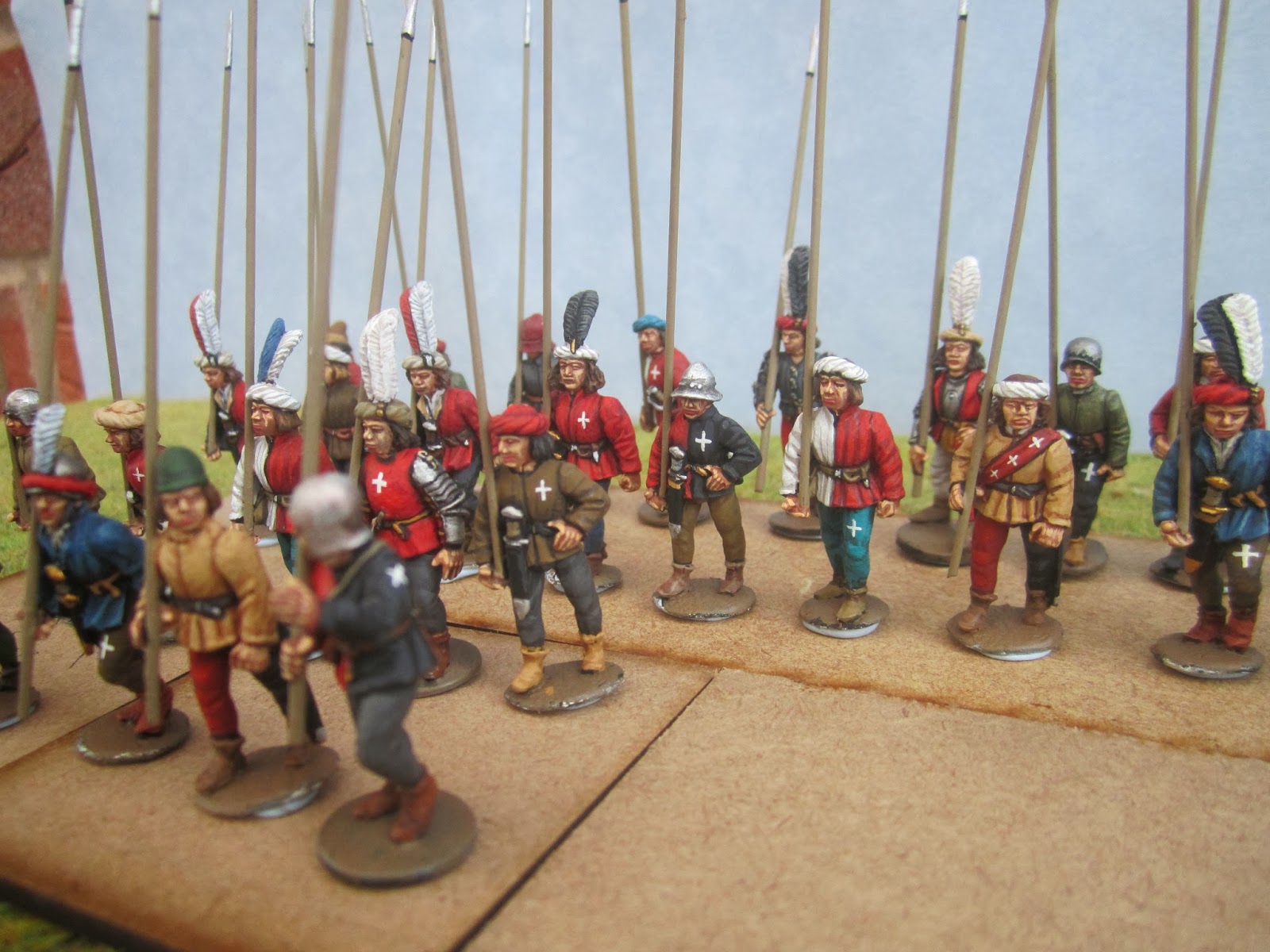 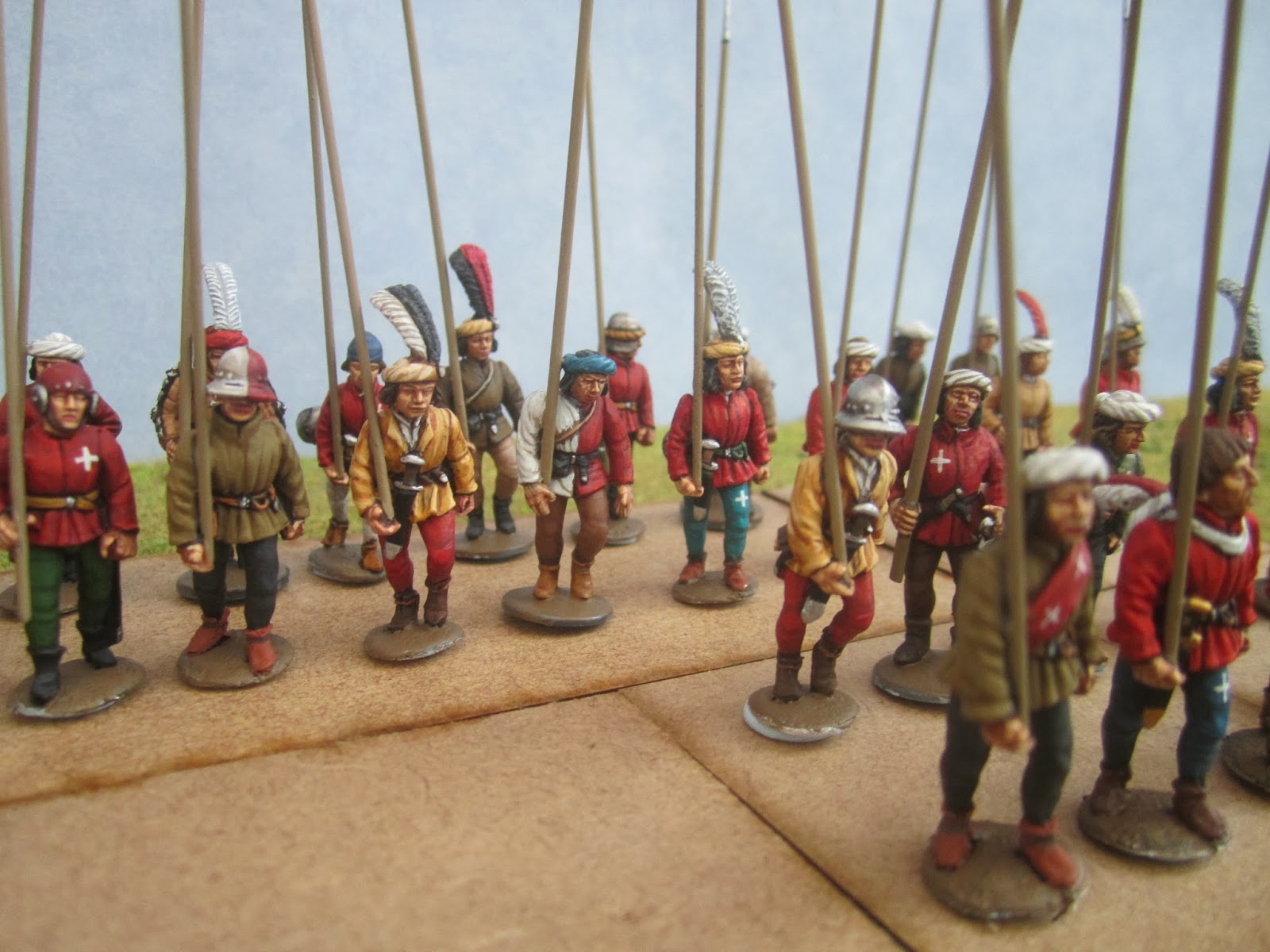 The figures are only placed on the bases for now; I'll not glue and finish basing any until I have all the figures done. I've taken a picture of the proposed plan of the entire pike block, which is a large one to represent the gewalthut, which consisted of the largest volume of Swiss Confederation trooops in the battles against the duke of Burgundy. It may still be too unwieldily on a wargames table, we'll see. The bases with flags are nicked from my other pike block and are only there for show at the moment - I have the relevant flags ready from the excellent Pete's Flags. I'm planning to add a few halbardiers guarding the sides of the pike block, thats why theres a gap on the edges at the moment, as indicated by the unpainted castings. The front bases will have pikes horizontal, hence the proposed placing of two ranks of figures only at the rear of the bases. 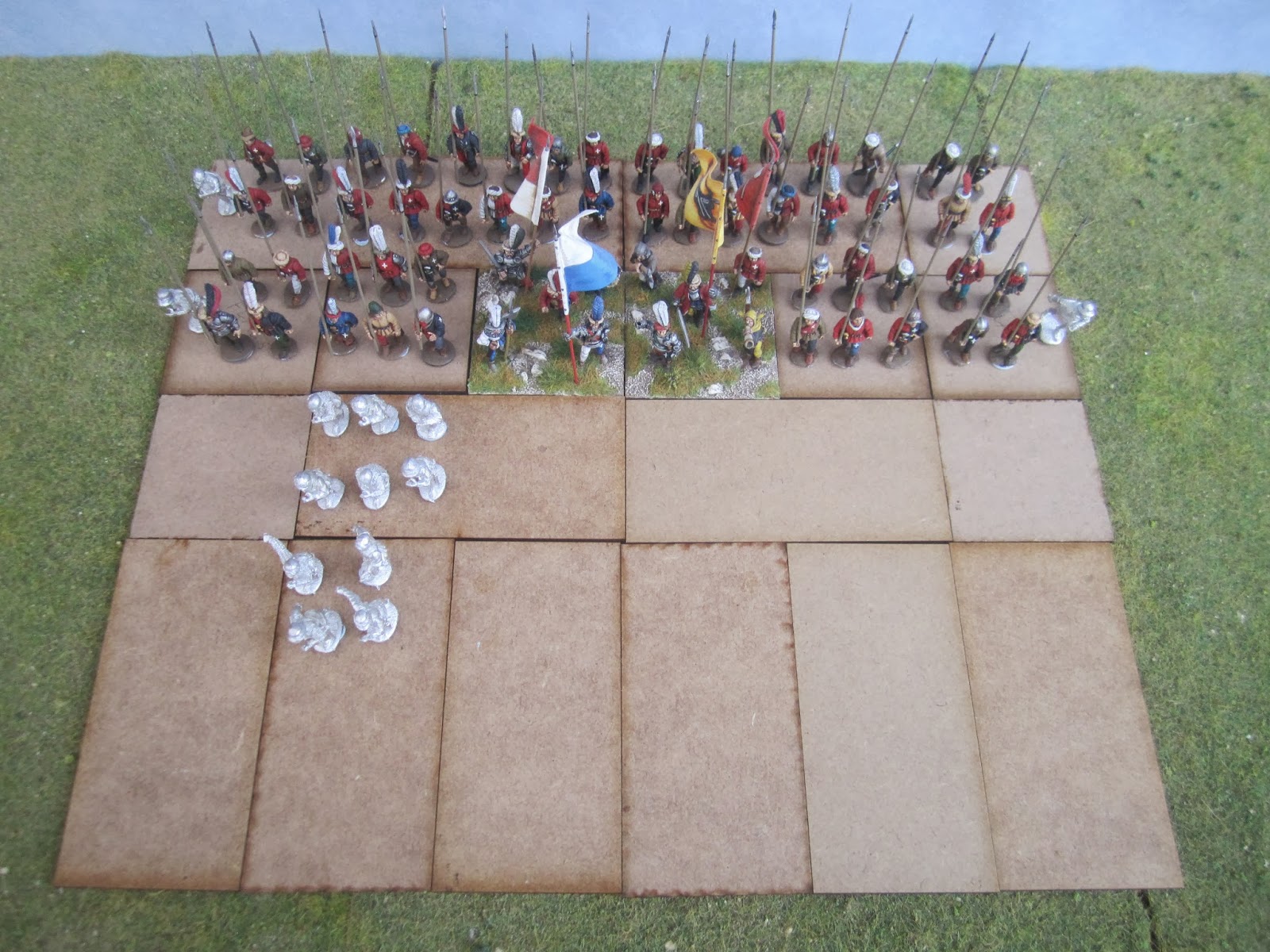 For now these may have to be put aside and await whatever additional Swiss figures are released by the Perrys later this year.