Metals, plastics and some putty 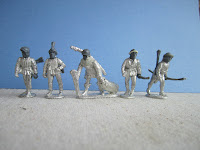 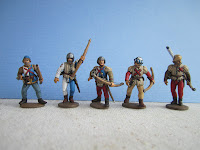 Just a quick update, as it's been a while.

The original intention was to get back to my Burgundians as soon as a certain London show was done and dusted. However, I've decided to complete my HYW armies, so it'll be slow progress here for a few more weeks.

I've decided to follow duke Charles lead and employ some extra resources from foreign parts - namely Archiduke's excellent painting services. I can really recommend Rafa's work, he has a neat and very detailed style and great use of the colour pallette. Pictured above are some longbowmen he has already completed for me and some metals that I've converted prior to being sent off for his brushwork. For added variety, I've utilised some of the Perry Swiss and EA range metals, to have some different poses as well as a couple wearing coats instead of livery jackets. I've simply removed their left hands and heads with a hacksaw and replaced with some from the Perry plastic boxes. With my limited sculpting skills have then added some scarves and an arrow bag with putty. The figure in the middle originates from the Perry HYW range, and although his kit is a little out-dated for the 1470s, he does have a contemporary visored sallet.

These will give me two more Ordonnance longbow units and I'll post them up when painted and based.