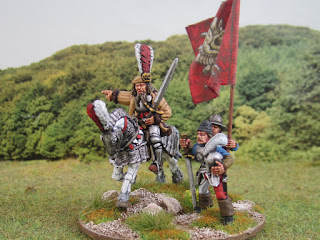 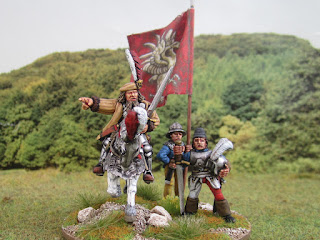 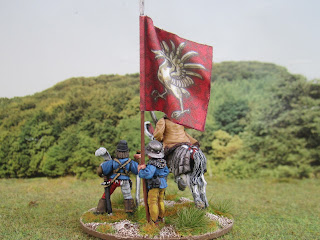 The flag sheet of Swiss captains is so good that I had to sneak another vignette in, before concentrating efforts on completing more Burgundian 'rank and file'. So this represents Peter von Greyerz, a captain allied with the Swiss Confederation who was at the battle of Morat (and possibly also at Grandson).

I've not been able to find too much reliable info on Peter himself to date, although there were Greyerz as lords of the town back into the thirteenth century. Gruyeres is a town in the Fribourg canton (Greyerz being it's German spelling) which was not formally adopted into the Swiss Confederation until after the Burgundian wars, in 1481.  In the 1470s it appeared to be under the legal authority of Savoy (an ally to Charles the Bold), whilst also being in the growing political sphere of influence of Berne. Fribourg canton allied itself to Berne in the 1470s, in response to Charles attempts to expand his territory and so this presumably determined Gruyeres fate too. The connection to the town gives me an excuse to add some pics from my visit there last year - it's a really lovely place to visit!

These are Foundry Swiss figures, designed by Dave Andrews. As they're stylistically different from the Perry figures, I'm using them in separate units but they are right for the Swiss armies of the Burgundian wars and great models to paint up. The only amends are that Peter rides an old Foundry armoured Wars of the Roses horse and the swordsman has had a headswop and my addition of a plume on the helm he holds.  The mounted figure was painted several years ago and has waited patiently for me to base him up, so it's been quick to get this base done. 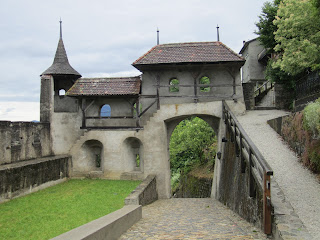 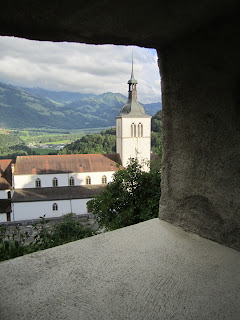 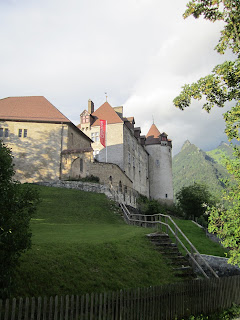 I have one more Swiss captain planned to do - then I'll await Michael Perry to design some Swiss command figures for the EA Range (I hope!) before I do any more. A brief break will now ensue on the blog as I take my summer holiday - but some figures and paints have been packed to take!