The third and last supply wagon that I plan to do for the present time. When I first saw pictures of the 'greens' for this model, they had a real wow factor - so I can't quite understand why I've taken so long to paint it up. This is a straight forward paint job; I didn't add the bracing struts over the wheels on this wagon, as aligning and fixing them was getting too tricky. 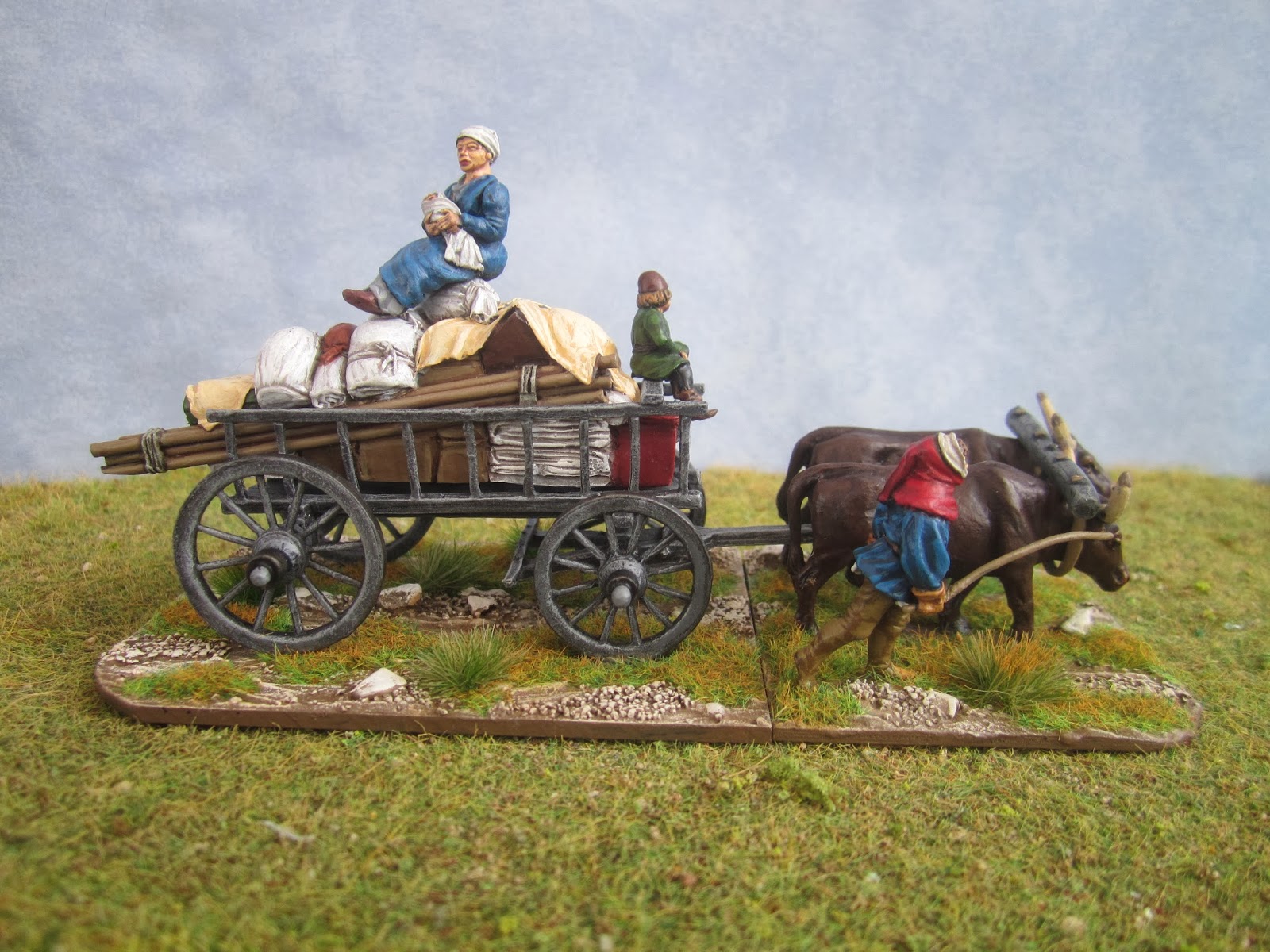 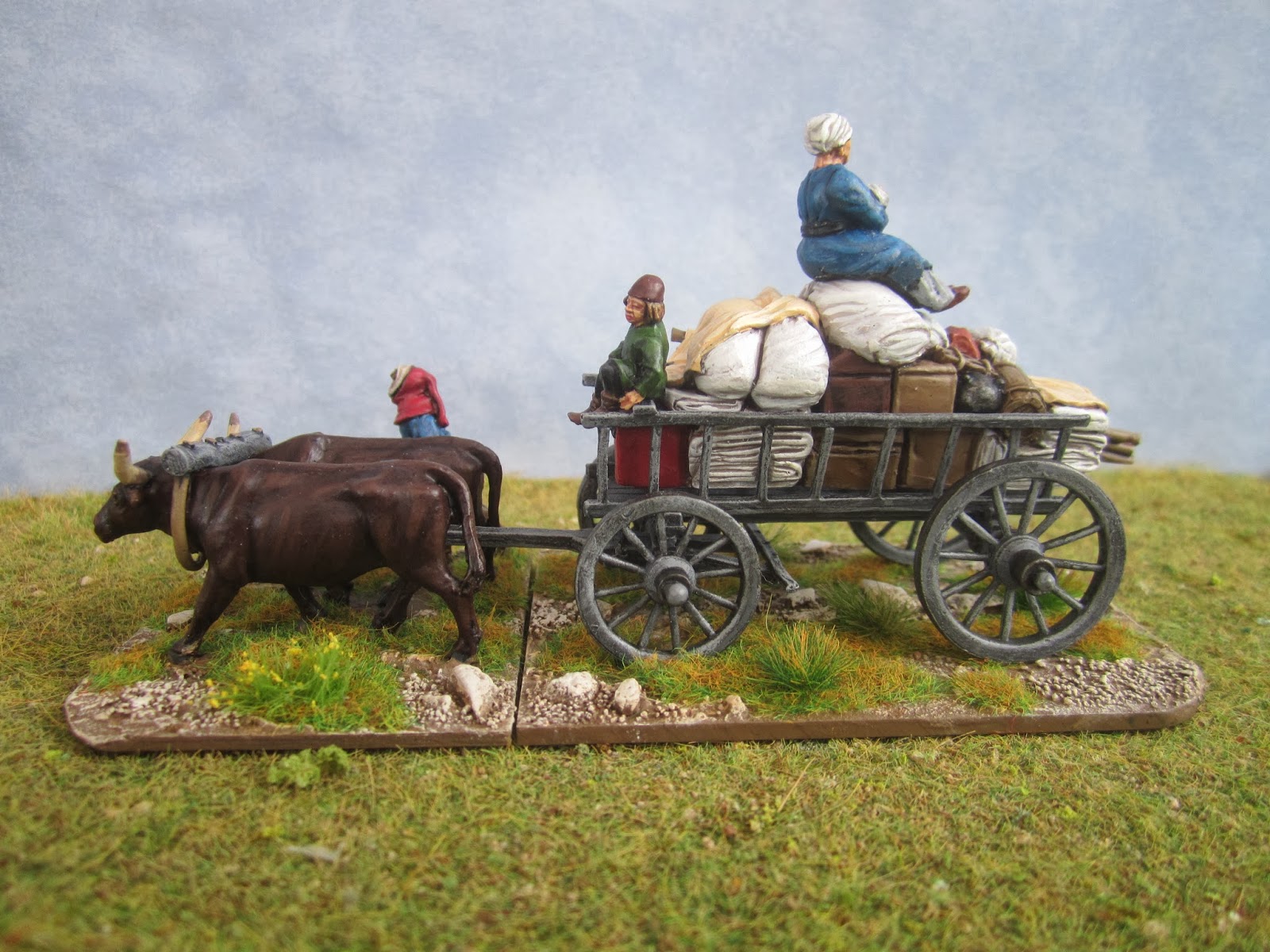 I've put the pair of oxen on a separate base, so that I could use it in a static position in an encampment. I'd already used the drover supplied on another model, so I have added a whip to the hand of one of the new peasants from the Perrys AO Range. I've not glued in the wagon contents, to give more flexibility - and the family members are also just leant on for now. That woman must have a damn good sense of balance, stuck up there on uneven fifteenth century roads I'm thinking! My tin of Humbrol Matt Cote is getting a bit old and seems to have lost it's wonderful matting properties, so regrettably the oxen and woman and child are too shiny for my liking (which I'll remedy another day). 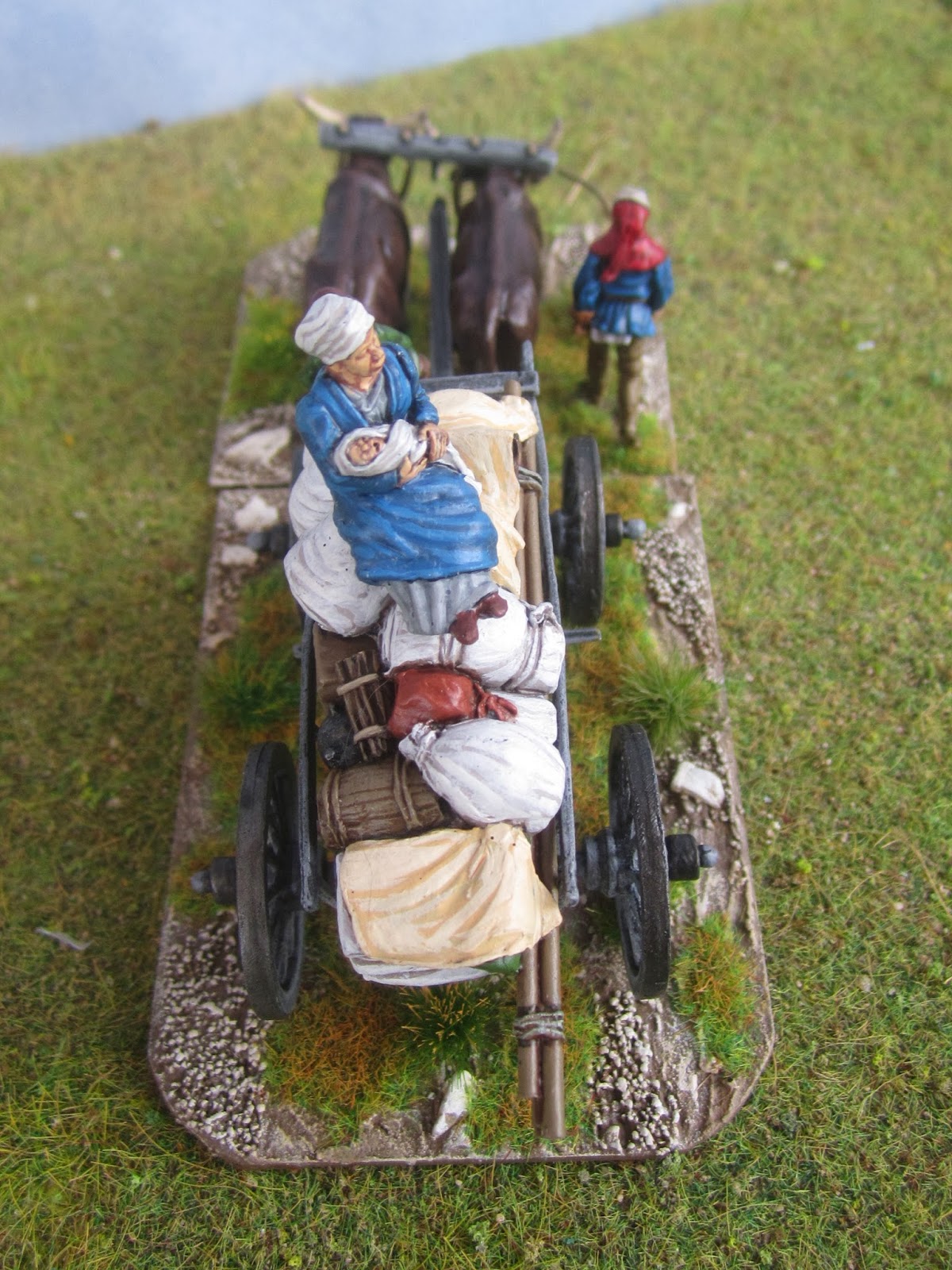 So back to all them Swiss pikemen I guess...

These are some pictures of a few of the Swiss Confederation pikemen, who have had helmets from various Perrys plastic boxes added, to create some variety from the turbans. 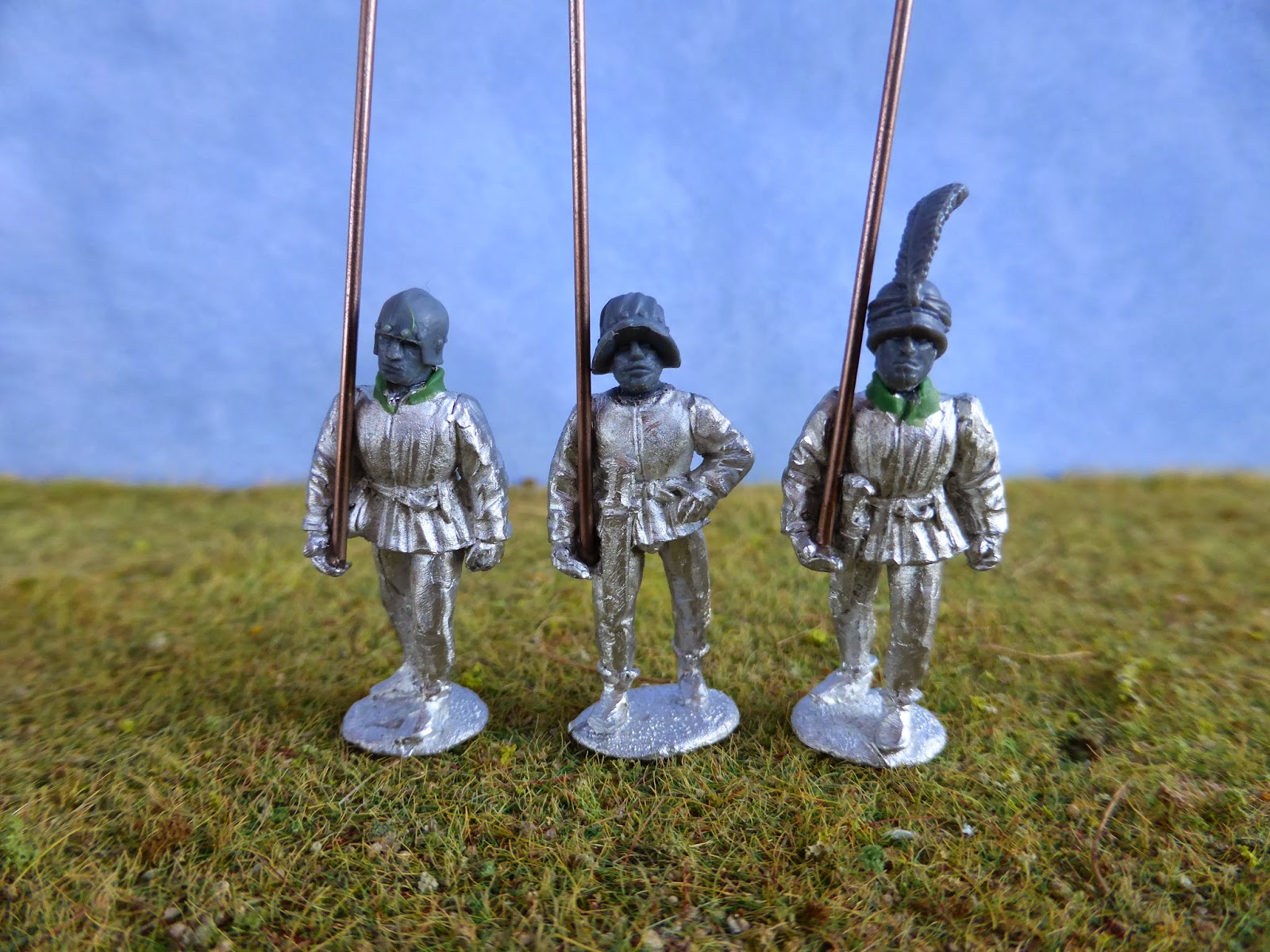 The cast on heads were removed with a small hacksaw and the new heads glued on. However the joints were a bit ugly on several, so built the collars back up with 'green stuff'. I also added a couple of small bags/purses whilst I had spare putty. The bareheaded figure has his turban hanging down from his neck, an image which I spotted in a Schilling Chronicle illustration. A couple more be-headings and helmets to add; then I'm onto painting the last batch of rear rank pikemen. 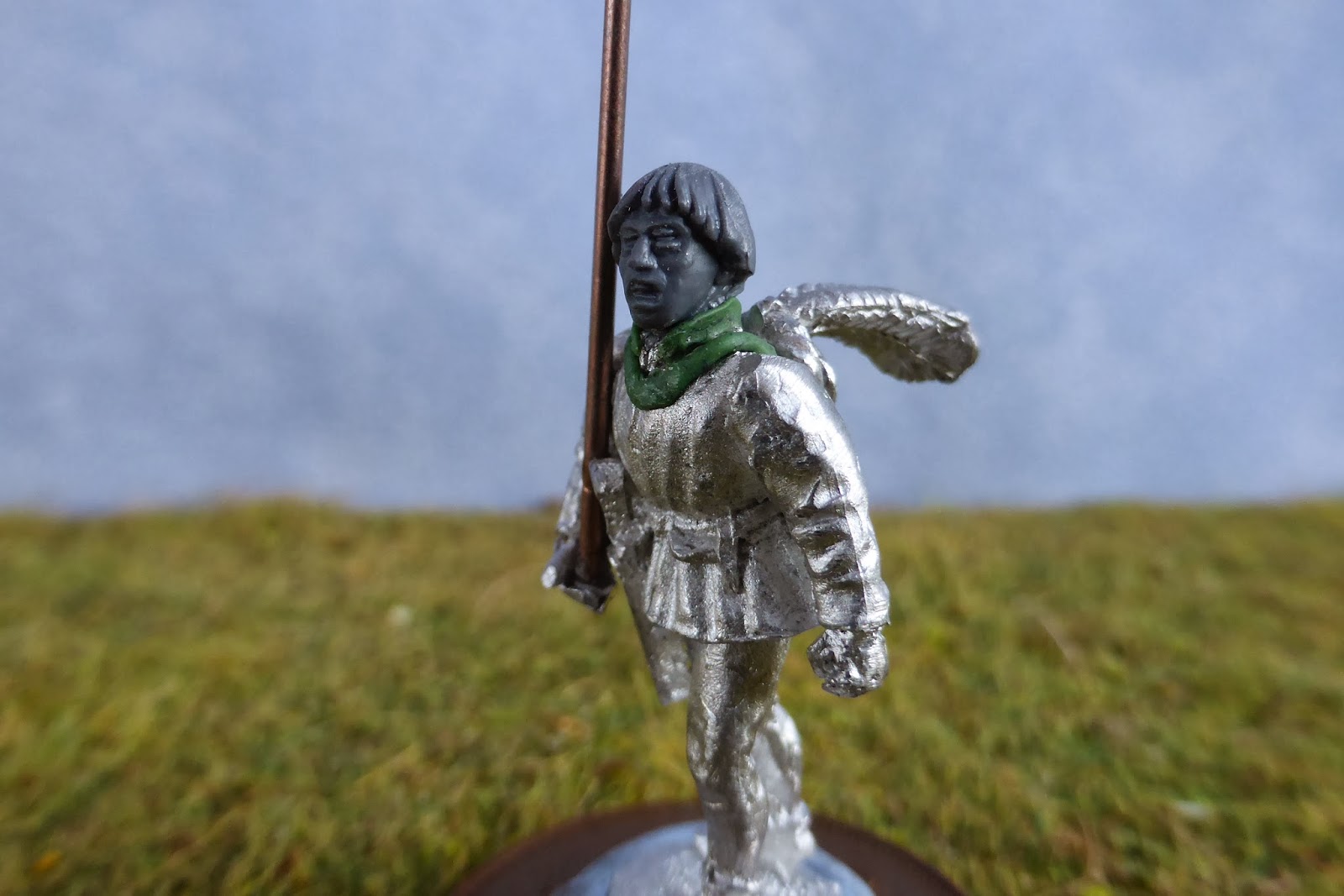 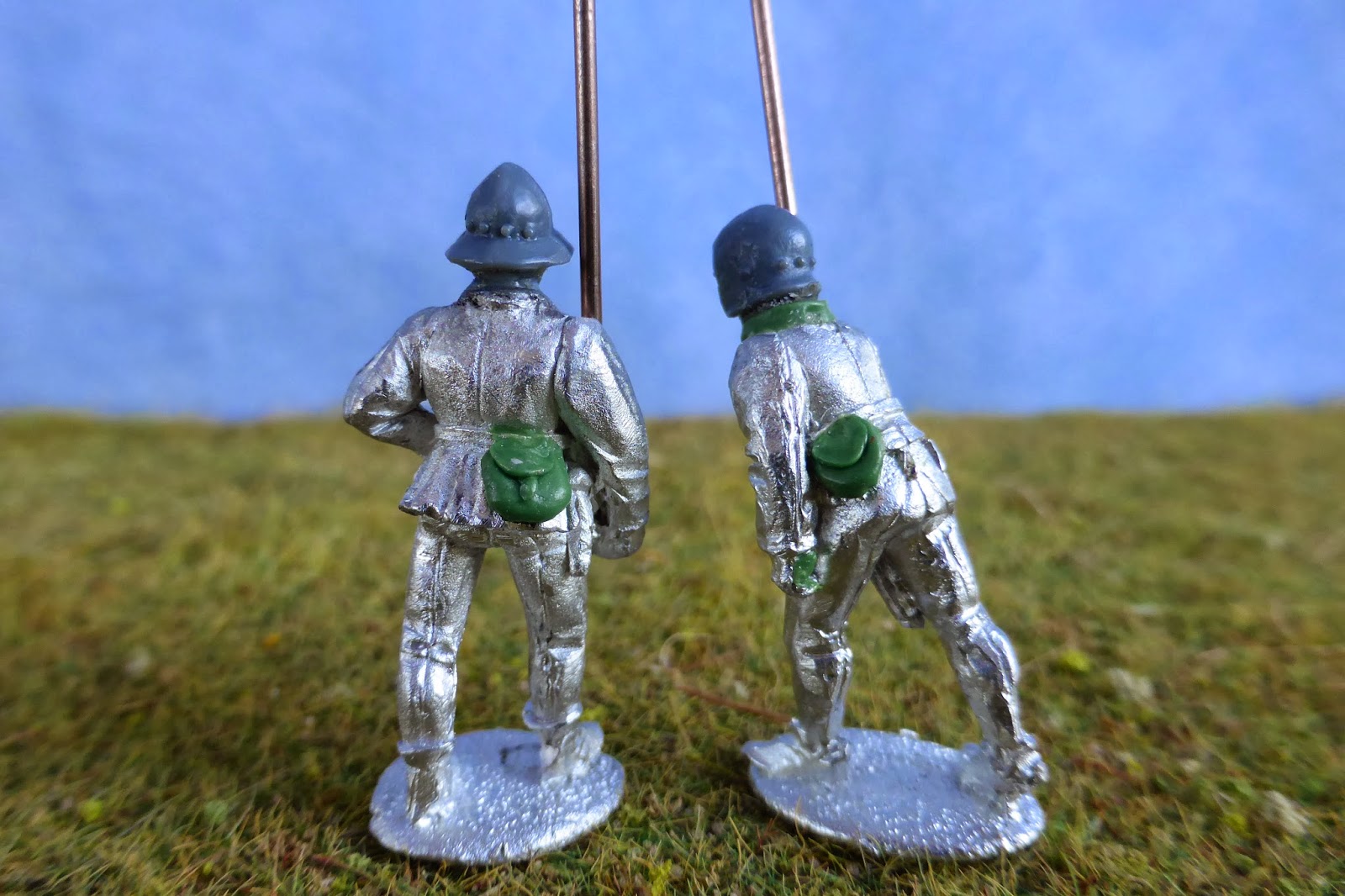 The horse will be used for another Burgundian man at arms. I used green stuff again to extend the depth of the barding, to enable me to possibly paint on a device and I attempted to add a chamfron too. These represent the limit of my sculpting skills. My key learning from this is to complete it in small steps. I've let the putty harden before tidying up what's been done, with scalpel and smoothing files, before adding the next step with more putty. This takes more time, but at least I'm getting modest results, which I'm happy with. 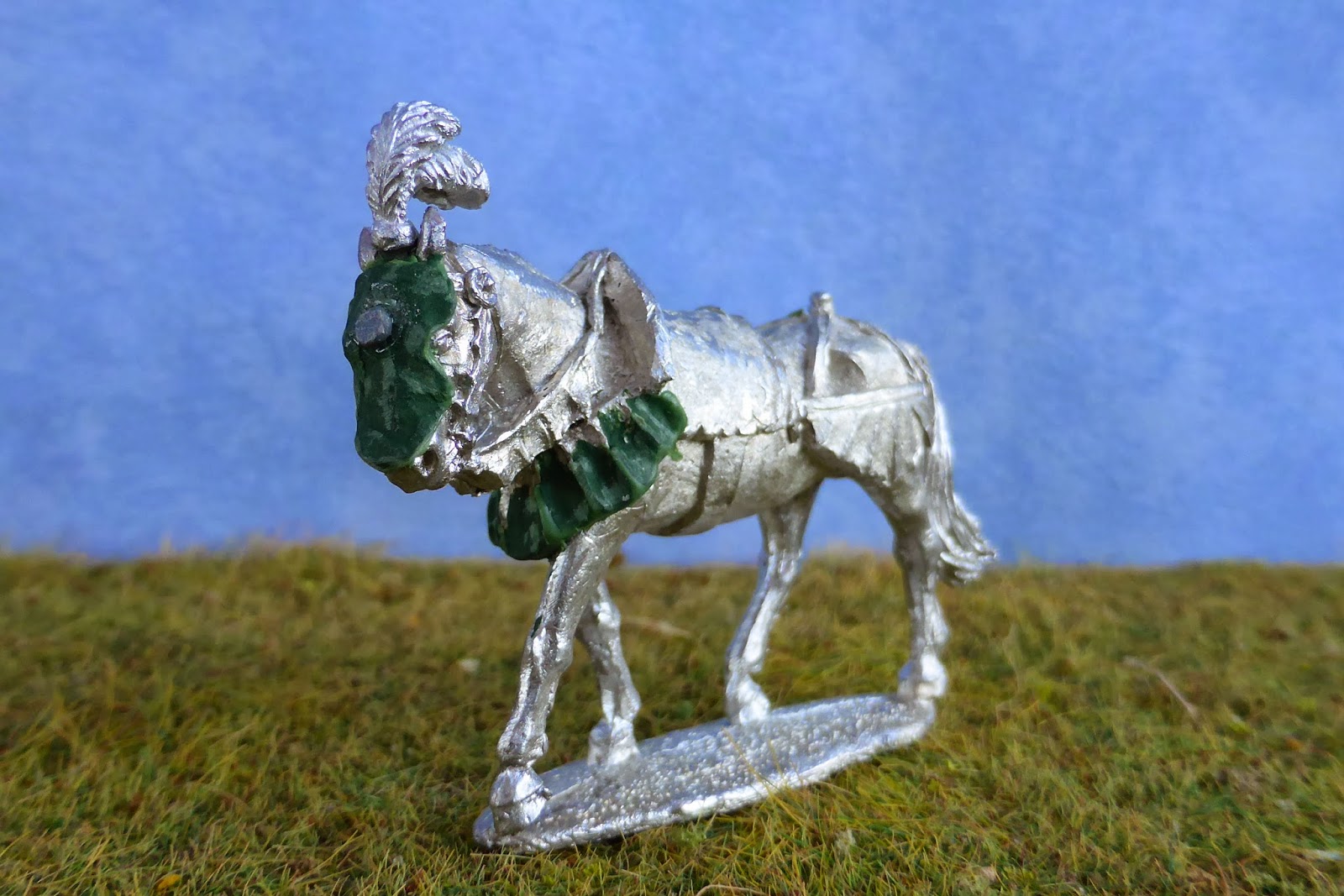 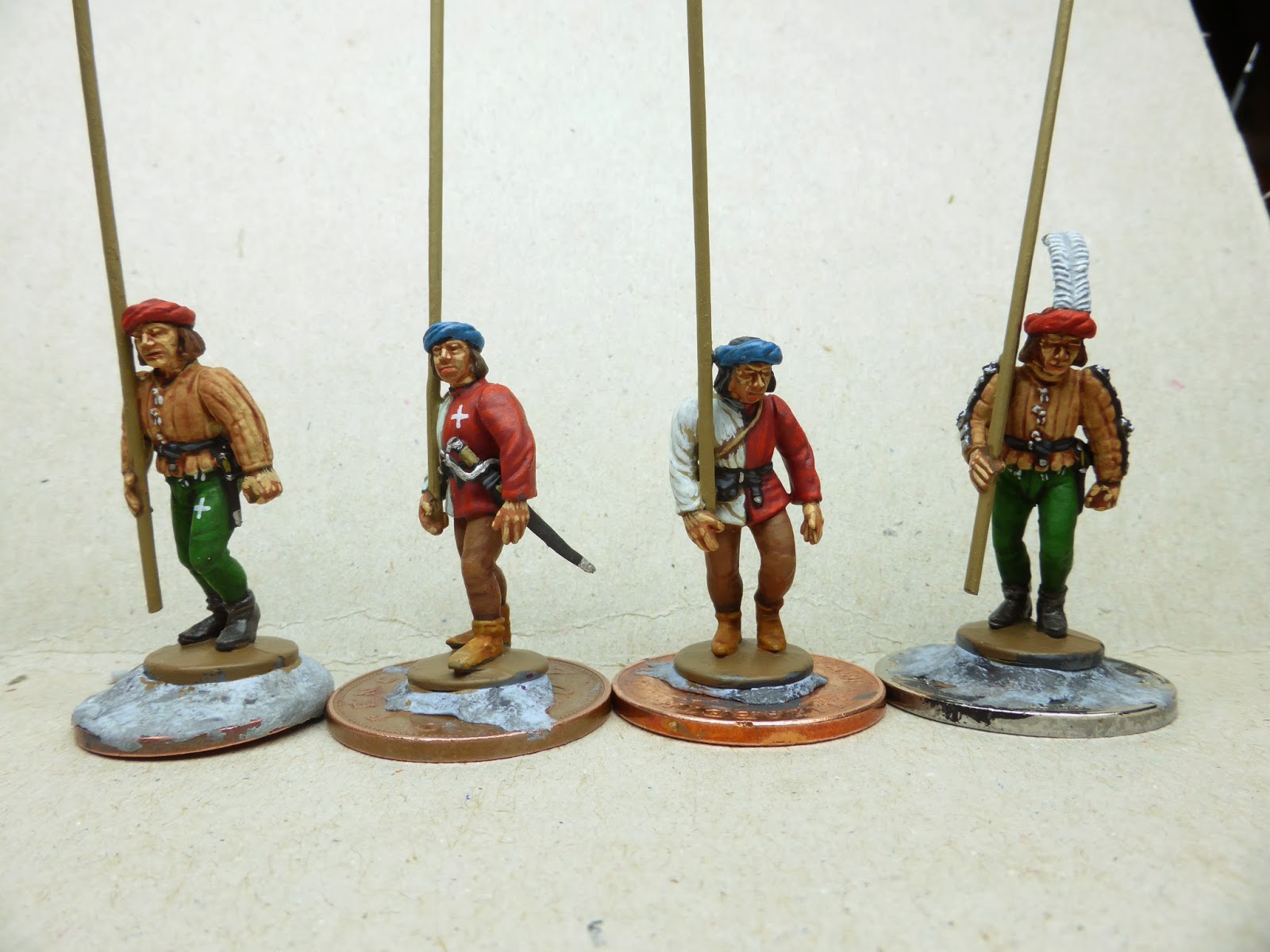 These are a few more Swiss Confederation pikemen for the rear ranks of my pike block done this week. I'm not going to post all my works in progress, as it'll undoubtedly get awfully tedious, but I'm also fiddling with a new camera I purchased at Christmas, trying to get a grip of the best settings for indoor pics of figures. Not sure these are an improvement on my previous (cheaper!) camera - colours look quite different on the models to my eye, but I'll persevere. 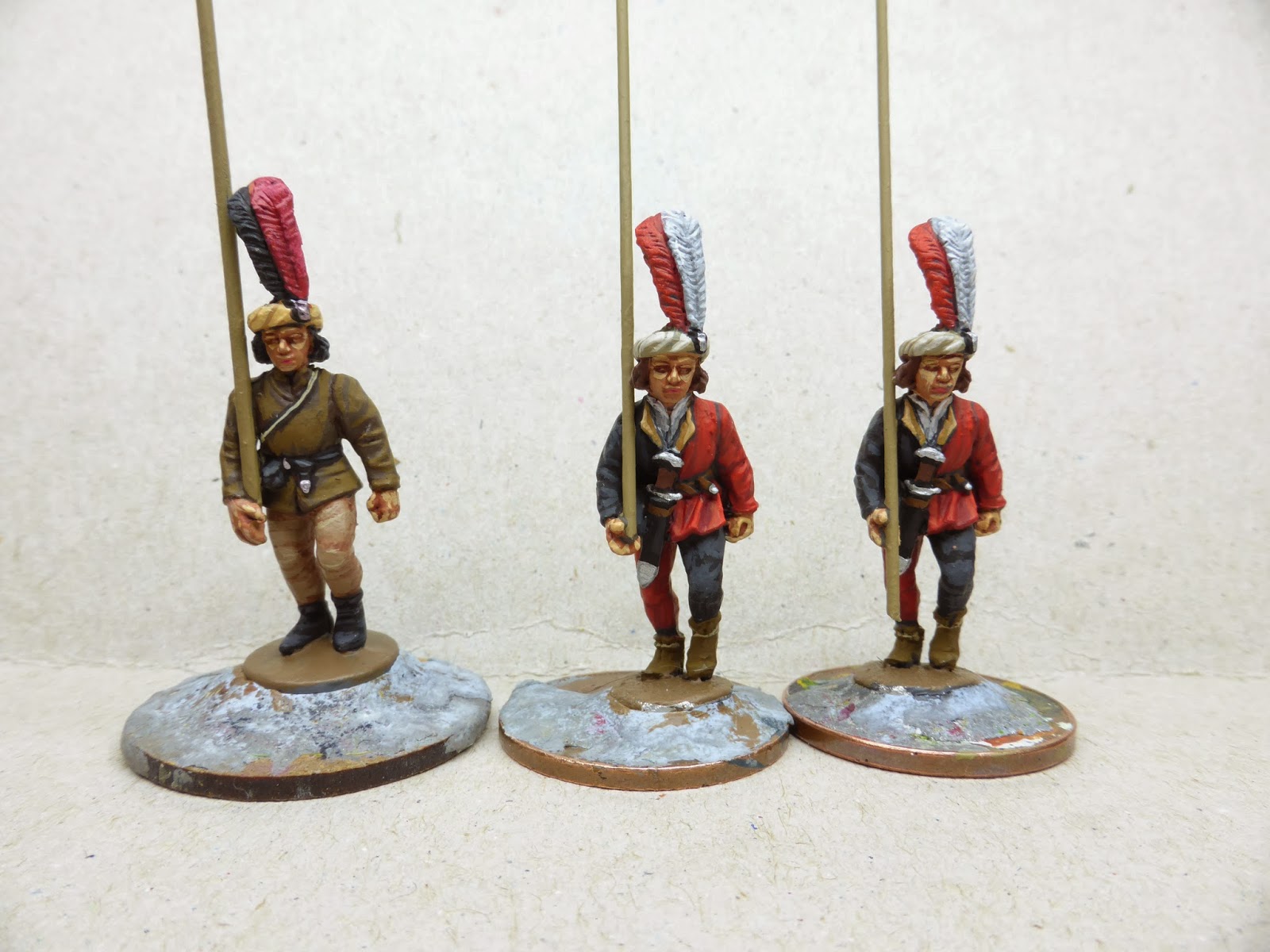 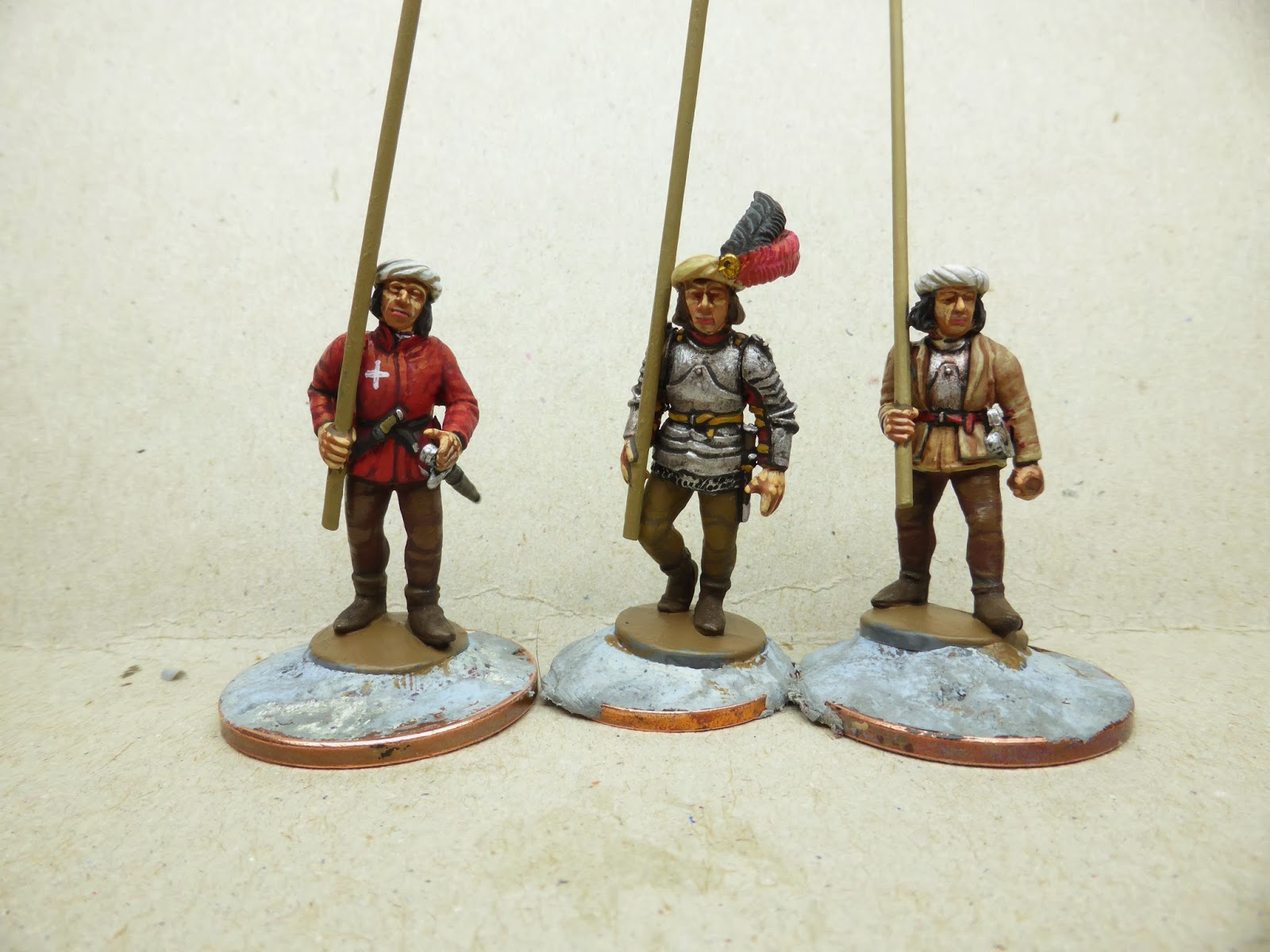 These are Perry plastics (all bar two) with heads from the Swiss heads pack. Next batch will be the opposite -  Swiss metals with plastic heads to add a selection of helmets.

I've started preparing and planning a Swiss pike block. This will represent Bernese 'Gewalthaufen' pike, along with allied regions and towns of Solothurn, Fribourg, Thun and Schwyz. At present the plan is to create a 'double sized' unit using the same base sizes as for my Burgundians; this would produce a contingent with a 36cm frontage and depth. I like the idea of the square formation, which should be visually attractive, with flags and halbards in the centre. 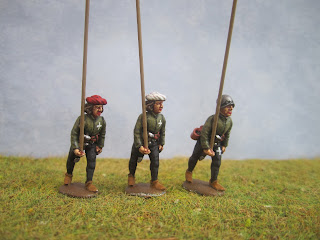 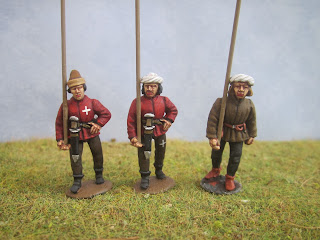 These figures are my first ones to test out colours and style - I need to adopt a quicker-than-normal approach as this unit will be about 175 figures. I've decided to start with the rear ranks, where less painting detail should be required. Also as the only dedicated Perry Swiss figures available to date are the marching/walking figures. I've made a few minor modifications to these; a couple of headswops for plastic ones, adding a plume and bend, and helmets and a tankard hung from belts. I will add in plastic figures too, using the metal Swiss heads and do some head swops on the Swiss figures so that some have helmets (not every figure shown in the Berne Chronicles wears a turban!), but the rear ranks will overall be unarmoured. I'm optimistically hoping that the Perrys will produce some more Swiss figures by the time I need to move to the command bases and other ranks(!). 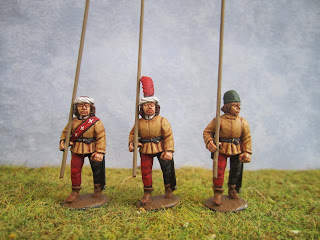 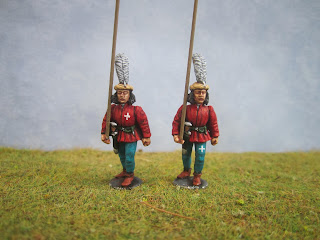 I've decided to paint them in small batches, largely of the same pose, using the same colour pallette. This will speed things up and I'll ensure that these figures don't get based next to each other, to avoid a uniform look. On which subject, I'm going to avoid the option of attiring my Swiss in cantonal colours. There is evidence that some Swiss Confederation towns issued clothing of specific colours; St Gallen sending it's troops to Grandson in red coats with Confederation white crosses attached. However, I'm pretty sure that this was not sufficiently widespread to create the types of 'uniforms' of later centuries. So I'm going to attempt to have red and black, representing Berne, more prevalent among coats and hose - hopefully to create an overall impression, with full cantonal colours being largely limited to captains, flagbearers and musicians.

Therefore, expect a few more 'work in progress' posts to be forthcoming for this pike bloc!