Some pics of the static display from the Battlefield Trust 550th anniversary conference of 10 July at Northampton Museum. The layout aims to show the dispositions of the Lancastrian and Yorkist armies at about 2pm, when following lengthy negotiations, the earl of Warwick decided to attack the royal encampment.
I hope the display added something to the day; judging by the comments and conversations that were going on from the delegates, it would appear so. Unfortuneatly the tables provided weren't entriely level, so the pictures have emphasised the joints in the terrain tiles. The conference speakers outlined the potential sites for the engagement; from the established one of the camp being positioned on a bend of the Nene to the more recent revisionist view on a west-east axis along a stream - which my tabletop display tried to show, with the abbey on the Lancastrian right.
The conference certainly raised levels of knowledge for the attendees. Speakers gave some high-quality, well researched presentations, covering the political context, military conventions and some re-enactors equipment to handle during the lunch break. We finished with a tempting insight from Glenn Foarde (who led the recent Bosworth site discoveries)into how a site investigation for Northampton could be conducted - the main stumbling block being funding ineviatably - hopefully an opportunity that the Trust will be able to pursue.
My thanks go to Michael Perry for very generously lending me the bulk of his WotR plastics collection for use on the day and so assisting the Trust. It was also good to briefly catch up with some gamers, who follow these ramblings on my collections and some local gamers who I'd not met before.
Posted by painterman at 12:23 10 comments:

Northampton (8) - The Queen and the Archbishop... 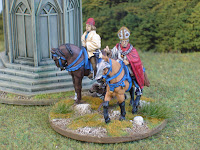 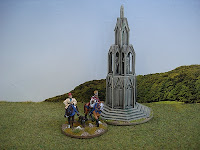 Have you heard the one about the Queen and the Archbishop?

This is the last vignette completed for the game, which will be located on the edge of the table, but which is a notable landmark for locals today and for attempts to accurately locate the site of the medieval battlefield. According to the accounts of Francesco Coppini, the papal legate who was an eyewitness at the battle, he and the archbishop of Canterbury watched the battle from the Queen Eleanor Cross, which is located next to the road south from Northampton to Towcester near Hardingstone village, he is said to have been able to see the puddles of water lying inside the Lancatrian encampment. The position of the cross helps confirm the approach route of the Yorkists and their likley position on the field of battle.

The cross was commissioned from Oshiro Terrain and James has created a really excellent piece, which is simplified and stylised from the original and also reduced in overall height to not be too overpowering. I may add a small cross on the top as the original appears to have had one, but that's now missing. This is a unique item for the game and will really set everything in context. Check out his other very skillful work and resin pieces here: http://www.oshiromodelterrain.co.uk/ More info on the Cross is found at http://en.wikipedia.org/wiki/Eleanor_cross

The archbishop is a Perry figure; Henry VI with a simple head-swop from a Mark Copplestone-designed medieval bishop figure I've had for years, sitting alongside his clerical assistant. These have been painted rather than dipped.

That's it folks - all done for the conference.

After that I think 'normal service will be resumed' with my Burgundians here and some more HYW ready to be based up over on the other blog (much neglected recently).
Posted by painterman at 06:14 4 comments: 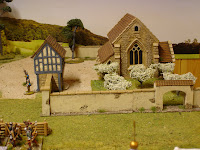 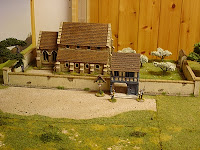 I've completed the models that will represent the abbey, which was very near to the accepted location of the battlefield - in whichever verison of site interpretations you may have a personal preference for.
De la Pre abbey (now Delapre, giving it's name to a southern part of the town) was a convent that had been on the site since being founded in 1145 by the Cluniac order. Queen Eleanor's body rested here in 1290 on it's jouney back to London and so near to the site a Queen Eleanor cross was erected, that still stands.
The plan was to represent the building, but not to have it imposing on the table, adjacent to the Lancastrian camp. The building is one of the new Grand Manner later medieval buildings, which are really excellent, especially the townhouses. This is the church building, which as it (oddly) has no tower looks sufficiently religious and substantial, but not obviously a parish church. It's been quickly painting and dry-brushed, with some foliage added climbing the walls to make it look more established.
The gatehouse is also GM building and the walls are from Empress (from Spanish Civil war range)and the orchard is by Realistic Modelling Services. Hopefully the whole thing holds together fairly convincingly, as the medieval buildings are now long gone and those on the site appear to be a mix of Georgian and Victorian? Unfortuneatly I'd not realised it was a convent until last week and so the monks that I've got ready to use won't be seen walking the grounds, and any nuns will be well and truly locked inside, out of sight, for their own security!
Picture taken from my dry-run set-up...
Posted by painterman at 01:31 1 comment: