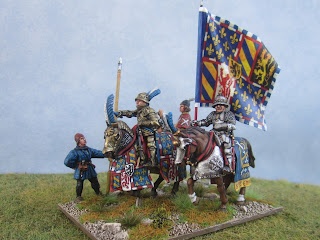 The command base for my Charles duke of Burgundy; this will be flanked by two more bases of mounted men at arms on barded horses. Charles is accompanied by his flag bearer, a herald and an attendant holding his lance in readiness, as he surveys the battlefield. 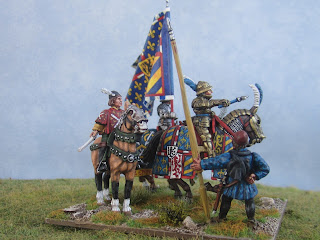 Some work in progress posts have already been posted on both the figures of the duke and his flag bearer. Both of these figures were expertly converted from Perry plastics by Oliver the owner & designer of Steel Fist Miniatures. All the painting is mine and I based the design on the flag bearer's caparison on simplified designs from Burgundian tapestries that still remain in museums. The flag is a download from the excellent Burgundian flags and banners on the Krigsspil website. 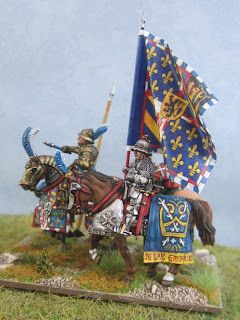 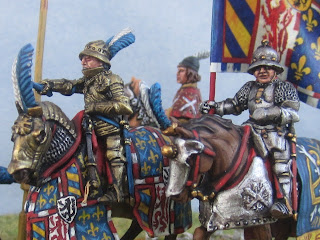 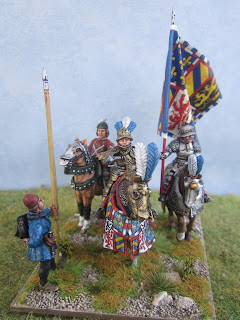 Charles was actively involved in all his military affairs and engagements - as was expected of politcial leaders of the time. As well as creating and signing detailed military ordinances to raise and organise his armies and appointing it's captains; there is plenty of evidence to show that he was personally involved in all his campaigns, as during the siege of Neuss in 1474-5, when he was described as "fully armed from head to foot for fourteen hours continuously".  An Italian ambassador noted that "He always rides in his cuirass. All his pleasure, his every thought, is in men at arms; to make them look good and move them in good order". At the battle of Grandson it was Charles who devised the tactical approach to engage the advancing Swiss, with concentrated artillery fire followed by a mounted charge of men at arms. His attempt at an ambitious tactical manoeuvre on the battlefield to realign his forces to deliver this was a significant factor in his defeat. At Morat his involvement was restricted by the sudden and swift advance of the Swiss vorhut and its breakthrough of the Burgundian defences, which forced him to flee a battle already lost. At Nancy in 1477 of course the duke's fighting in the melee resulted in his death. 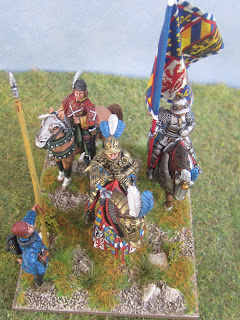 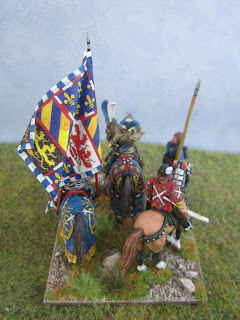 Moving on, the mounted men at arms who'll also make up my usual three-base unit, will be on barded horses in more passive stances. This means a degree of conversion work is required and I've started on this, and will post some progress soonest. 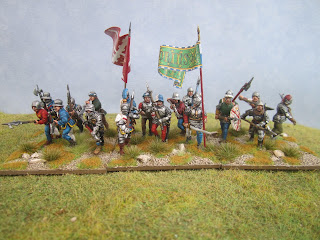 So they've been a little while acoming, but I've finished the basing on the second pole-armed unit of Burgundian Ordonnance - which completes the two planned contingents of this type.

The background to the painting and flags for this unit have been covered in an earlier post. I ended up not changing any of the positions of the figures; I fiddled around but they seemed to work OK and the 'Italianates' carrying the shields add a slightly different dimension to this group. 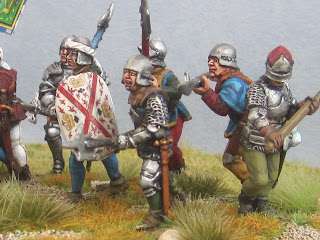 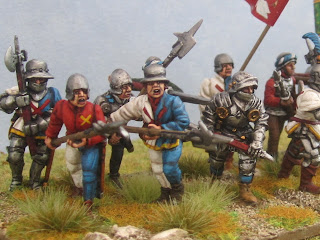 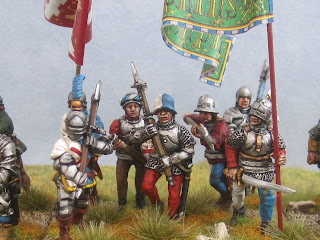 Next posting should be something a little higher up the medieval social structure....

My painting output has slowed somewhat over recent weeks, so no new figures to show just yet. This is due to holidays and I've started too many things and lost my way somewhat. So I either need to focus and finish off a unit, or even have a break and paint something else ( I have a steadily growing pile of AWI stuff which I'd like to restart sometime this year). 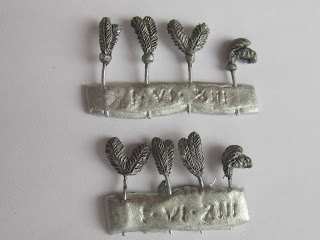 In the meantime, I have received the production castings of the plumes - done for me by Oliver at Steel Fist Miniatures. I have created two sprues of the same plumes, one with orb-shaped holders and one without. These are not cleaned up, but just washed with ink to show the details. They should be easy to add to helms and chamfrons, by drilling a small hole to glue in the locating pin.

Time to start enhancing a few Burgundian figures with some feathers....

Payrac - a one horse town.

As is usual I took with me figures to paint on holiday (some plastic Perry horses) and as usual I made very little progress. The main reason was the weather - very warm and sunny - superb for the holiday, but very problematic for painting. Firstly the acrylics dry much too quickly and even when kept dampened with water are drying on the brush and so not applying in the same way. Secondly the light is different to daylight bulbs and even in a shaded spot the overall glare makes it tricky to see details sufficiently well. I can only deduce that all those great figure painters in Spain and Southern Europe, do not pursue their hobby al fresco. 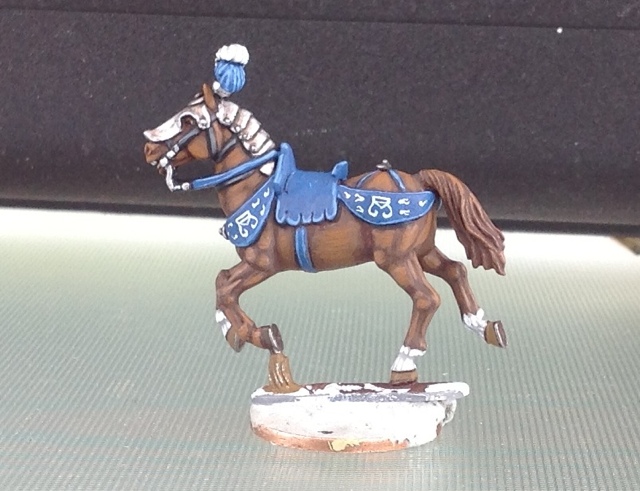 So a great holiday in wonderful part of france; food, wine and scenery all excellent, but only a single completed horse to show for it. Others are at a shade coat and first highlight stage only, and will be finished off back on the trusty painting desk in the UK - where the sun never shines!
Posted by painterman at 04:50 6 comments: