Apologies for lack of recent postings. The only real progress made on my Burgundians has been the preparation and painting of sufficient horses for the next two units of mounted coustillers. Although there’s been some modest tinkering of horse tack, etc, I decided that this doesn’t really constitute enough for a posting, at least until the riders are done (and I’m currently about half way through). It therefore goes without saying that my mid-year aspiration that I would ‘complete’ the planned
Burgundian army has not come to pass. 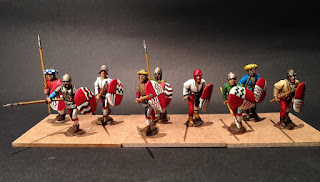 So here are some images of a possibly unwanted diversion that’s taken up my recent spare time – and apologies to any LAF members as these images have been updated there. The idea of creating  modest armies to game some facet of the wars in Italy in the mid 15th century, have been intermittently  gnawing away since 2012 and some Italian skirmishers I painted. Probably like almost everyone in the hobby, other than the most disciplined, I’m too easily distracted by other figures and wars that I would like to recreate in some way and so dip in and out of them (and mine collections are not restricted to the
medieval period, just for the record).

So I’ve grasped the nettle and converted some Perry Italian metals from swordsmen to spear and shield light infantry. Painting’s been done with washes and few highlights to help speed things up slightly. Shields done by hand in the current absence of any printed transfers, which I’d prefer to use Colour schemes have been taken from Italian battle scenes of the times – namely Florentine painted caskets in the Gallery of Ireland  and battle of San Romano. They depict Milanese, which I’ve decided to start with, having some of the excellent flag sheets by Pete’s Flags for campaigns in the 1440s, between Milan and a political alliance consisting of Florence, Venice and the Papacy, including the condottieri captains involved. Some units will need to be ‘state-agnostic’ to provide some flexibility when I finally get around to using these on a tabletop. 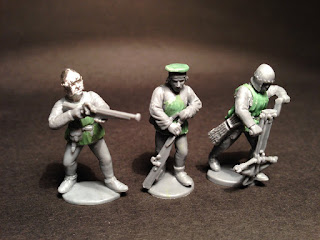 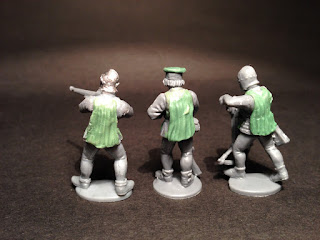 Next up has been adding some green stuff to create Italian styling to existing Perry plastics. My sculpting skills are limited,  but like everything improves with practice and I’m happy with the giornea (tabards)  I’ve added, as well as cloth coverings to the horse bard. The latter will be an elite unit of ‘broken lances’ from Milan. The metal plumes are Mirliton castings, drilled and pinned to armets. Painting on these won’t start until sometime in 2016. Working with ‘green stuff’ is a very gradual process I’ve learned, so I’ve now got a number of figure amends on the go, adding more when I can. However I’m pleased with my modest results, they’re at a level  which to my eyes makes them look sufficiently convincing and are enhancing the figures with an ‘Italianate’ look, and the sculpting tool is an enjoyable alternative to the paintbrush 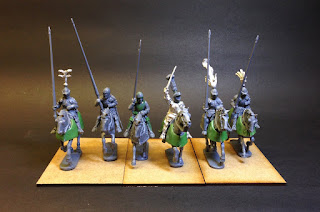 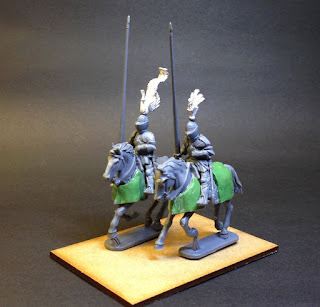 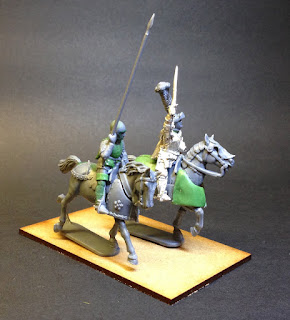 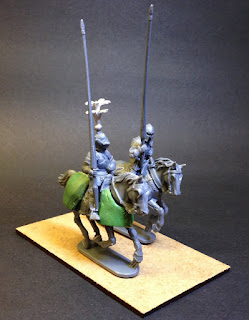