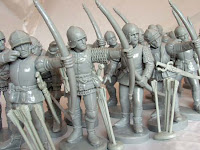 Hey, some news and a post!
I'm sure that the majority of the gaming fratenity have seen the latest pics on the first Perry 28mm plastics for their new Late Medieval range, to be released pre Christmas.
These will form the majority of my new Burgundian Ordonnance army, along with the metals that are released too. These have fantastic potential, I'm sure they'll be used for fantasy as well as all the English & European historical options. Loads of variations look possible with the seperate arms and heads.
One of the great things with the new phase of hard plastics is the huge number of variants that can be obtained from a box, be they Perry, Victrix, Warlord, etc . That, plus the low cost relative to metals of the same quality, and the conversion potential, if you're feeling brave enough to get out the scalpel, glue and filler.
Looks to me from these pics that they'll be seperate swords/scabbards plus arrow bundles for the archers on the sprues. I particularly like the arrows pushed into the ground too – hope they'll be lots of them – very useful for seperating and using as arrows shot into the ground for attacking Swiss pike and halbard bases.
Basically, all options well thought out as with other Perry plastics and can't fault them (other than we'd like 'em sooner!).
My plan will be to do an 'out of the box' contingent or two of English archers in Charles' service and then perhaps some Ordonnance halbardiers, with a few modest conversions to add plumes & scarves on some helms and even a sewn-on cross of St Andrew.
Roll on Christmas!
Posted by painterman at 14:10 2 comments: