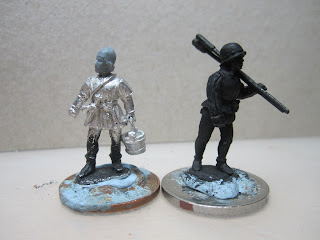 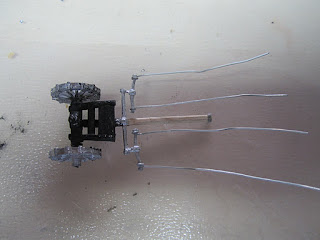 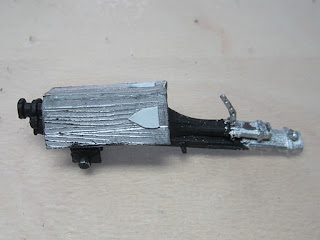 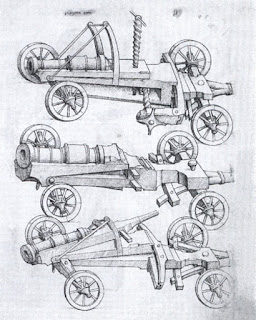 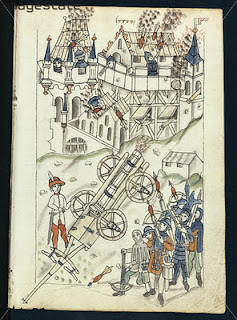 I've started work on a base for a limbered Burgundian artillery piece, utilising the new draught horses from the Perry baggage packs. It will depict a field piece about to set off for a campaign or siege. This is a work in progress post.
There is not much specific information on how late medieval artillery was moved and exactly when separate limbers were widely used. The barrels of larger bombards appear to have been loaded onto wagons and their wooden frames possibly rebuilt on site, by travelling carpenters, specific to the requirements of their location. There are some later fifteenth century illustrations of limbers, a couple shown here, and so I've taken the liberty to try and reflect this type.
I've used an old Foundry ECW limber casting I've had for ages as the basis. To this I added the frame for the traces from a Perry baggage wagon and a central shaft from balsa. The artillery piece is a Perry one, with a small mantlet added. These are shown on contemporary illustrations, presumably attached with hinges at one end. When erected they afforded the gunners some protection and when lowered covered the barrel against the elements for travel. This has been constructed from standing shields in Perry AWI artillery packs, re-cut to size and attached together at a 45 degree angle - the shields will have a civic coat of arms to denote their origin. The two gunners have had some simple changes; one has had the breech he's holding replaced (and saved for usage elsewhere) by a bucket and a headswop for a soft hat. The other is a Perry WR halbardier who's now carrying the powder scoop and ramrod.
Should post the completed model soon, awaiting a larger mdf base from Warbases to arrive.
Posted by painterman at 04:35 4 comments: 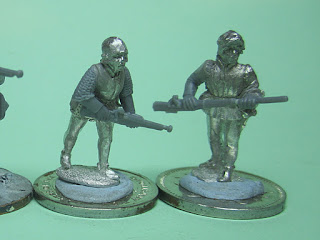 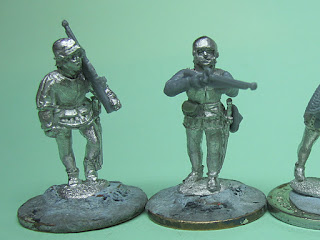 I've created a few different poses for my next unit of Ordonnance handgunners. These use some selected Perry metal halbardiers. These have had arms carefully removed with a hacksaw and plastic ones added from the Mercenaries box. A bit of filling was required using ProCreate to cover small gaps and also to add some powder bags for those who've not one them on the original casting. The remaining figures, they'll be nine in all like the previous 'skirmish' unit, will be assembled from the plastic spures in the Mercenaries box.
Posted by painterman at 13:40 6 comments: 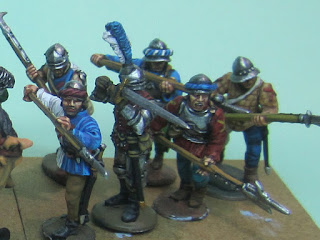 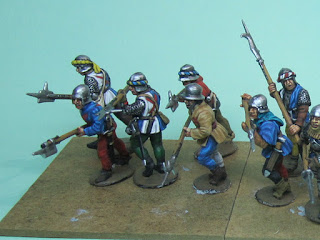 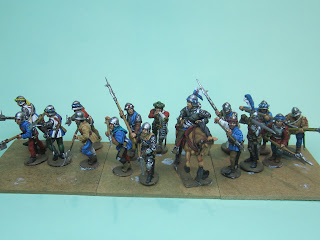 I've painted the figures that I currently plan to use as an attacking Burgundian Ordonnance halbardier unit. The pics are taken quickly on my painting desk, so aren't the best quality. I've decided to hold off fixing them and completing the basework, just in case new figures that lend themselves to these get released. I'll probably come back to them in a couple of months and see how the land lies.
The additional bases are both metal and plastic Perrys, to which I added a couple of scarves to helmets. I'm pleased with the overall composition which I was seeking to achieve. It's nice to do a unit in fighting poses rather than the usual two ranks deep and bases such as these attracted me to Impetus and so I'm now sketching out what others I could do in future.
Posted by painterman at 14:54 7 comments: