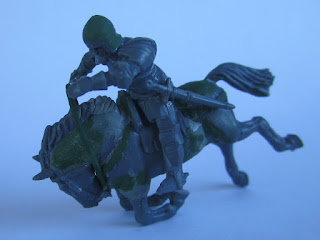 For the second base of the Burgundian men at arms I’m stretching my modelling capabilities to try and create a falling horse and rider, as the company will be charging the enemy.  The Perry plastics make this conversion attempt possible of course and it’s one of the joys of the ‘plastic revolution’ that I can regress to past days of admiring this type of model conversions (typically more advanced than mine and usually in a larger scale) in Military Modelling magazine and have a go myself. Others have already done great plastic conversions with this range – notably ‘Captain Blood’ and ‘Admiral Benbow’ on the Lead Adventurers Forum.

Firstly the horse – some hacksaw surgery involved here. After assembling the two body halves, both front legs were cut off and repositioned further under the horse as it’s falling to its knees after being hit by a crossbow bolt or handgun shot (so far I’ve resisted adding an arrow/bolt shaft into the horse’s chest, but I may yet do this). The repositioned legs were pinned, glued and the gaps filled with Procreate putty. The horse’s head and neck were realigned. The head was cut from the neck and then a largish wedge of neck cut away. Head and neck were then re-united with plastic cement. The attachment of the neck to the body was also repositioned and glued further forwards after the joining ‘lug’ was trimmed to fit, to get the head as low as possible. This left a gap at the joint near the saddle, which was filled and the mane extended over the new neck extension with more putty. The cast-on reins were removed with a scalpel and replaced with fuse wire. This created the wounded horse. 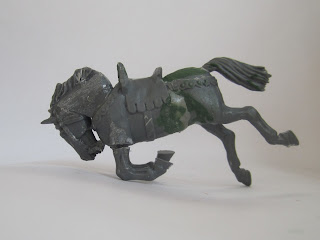 I initially wanted the rider to be dramatically falling in mid-air over the horse’s neck – having found pictures of race jockeys falling from their mounts. However it proved too difficult for me to achieve a convincing pose with the figures (and my capabilities), so I post-rationalised that a man in full harness was less likely to be shot through the air as a smaller modern day jockey! Therefore he’s still in the saddle – but pitching forwards with the velocity of the horse’s fall, arms out to try and protect himself from imminent impact with the ground.

I used the legs from a plastic man at arms, cut off at the waist. These were joined to the torso of a fully armed figure on the command sprue in the Perry Mins ‘Bills and Bows’ box. Some filling was required to cover the join of the armour plates. The rider’s left arm is also from the same command sprue as the body. The right arm was selected from the mounted men at arms box, with the angle adjusted slightly (pinned and filled under the armpit) and with fingers grafted from a spare plastic longbowman’s hand. I’ve chosen an open barbute, as the face has an open mouthed expression which should work nicely to reflect the shock of the impending fall – I’ve given it a wash of GW Green Stuff as I’ll probably paint it as a fabric-covered helmet. 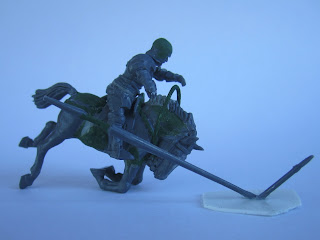 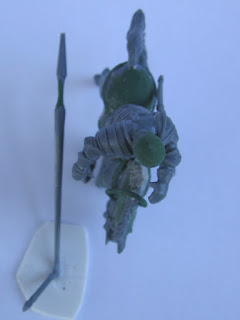 I’m happy with the result - given the extra time that it’s taken to assemble. Not too many parts were wasted in the trial-and-error approach; it’s been great fun and given me encouragement to perhaps try some more ‘ambitious’ poses with the plastics. 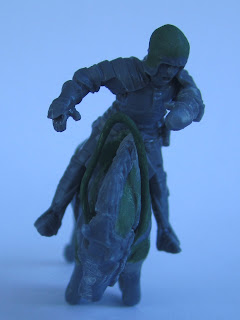