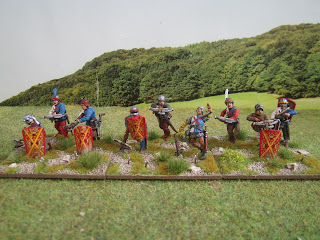 A second unit of Burgundian Ordonnance crossbowmen, which have taken some time to be completed. Most of these figures were painted for me a couple of months ago by Chris Thompson and I’d been dithering about how to base them, knowing that the Perrys were working on metal Italian crossbowmen. I’ve painted up some of these new figures, but then decided that they really needed was a casualty figure – which I added to Chris’s lovely figures. I wanted to create the unit advancing and under fire and using pavises.

It’s probably unlikely that pavises were used in this way in open battle; they were certainly employed in large quantities in both sieges and on board ships to add protection on the decks. However I’ve given myself some margin for historical reinterpretation as the LBMS transfers are so wonderfully detailed  and really look the part, being based on surviving examples – despite being just a tad too small for the plastic pavises and so requiring some paint to be mixed to match and blend the edges a little.

The figures are mostly plastics from the Mercenaries box, with a couple of minor conversions that were done on metal figures from the EA halberdier pack and the WR artillery crew. 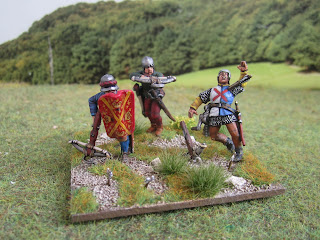 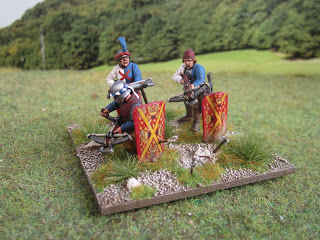 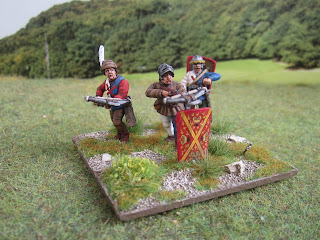 I’m now planning to do an additional mixed crossbow and handgun unit of skirmishers – partly as the Italian figures are so nice (and completely usable as Charles employed large numbers of mercenaries from Condottieri captains) and as I have acquired a lovely Ordonnance crossbow flag to use. 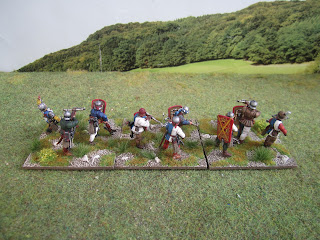 I’m  at the basing stage with another Ordonnance unit, so they should be along quite soon…