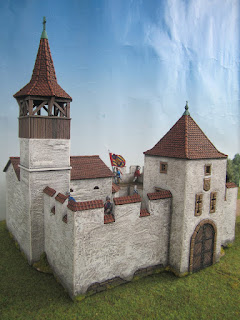 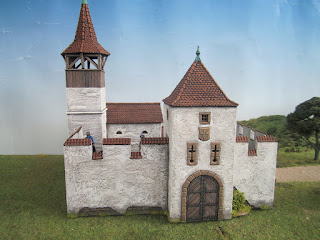 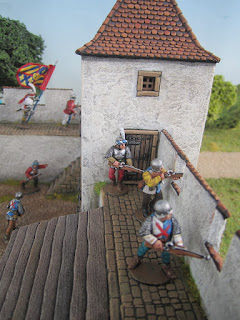 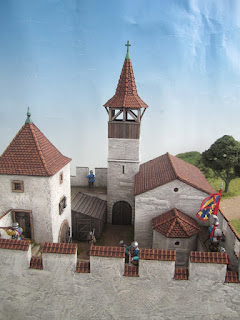 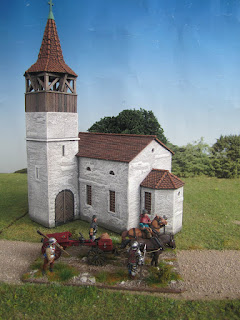 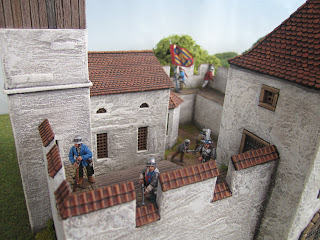 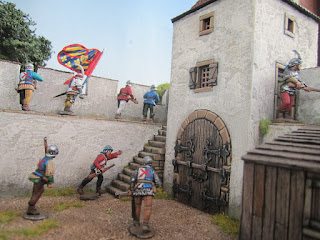 Painting progress has been slower than planned this month as work has kicked back in and my ebay sales have taken up spare time - never have I wallowed in so much bubble wrap! Anticipating that this may happen I squirrelled away these photos to bridge the gap.
This is another lovely John Boadle model, which was made for me a few years back. It's based on contemporary illustrations and pictures of walled churches that still stand in Switzerland and the French alps. It comprises of the gateway and walled section with a separate church building that slots into place but which is also usable on it's own. As usual John executed my sketchy outline ideas perfectly and then added a whole load of details which just made the model look so convincing. The thickness of the walls is exaggerated somewhat by my requirement to have wide parapets to stand figures on, given the depth of my gaming bases.
The figures manning the walls are the recent Burgundian handgunners, before they were mounted on bases.
Hopefully I will get some more Burgundians and/or Swiss done shortly, before the release of the plastic mounted men at arms at Salute - after which I expect they'll be the focus for me.
Posted by painterman at 10:28