I seem to have got a bit of a spurt on last weekend, so here's the completed contingent of Burgundian handgunner and crossbowmen shot. 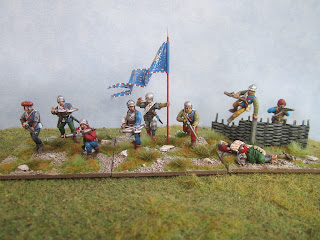 This unit was an addition to my original planned army list, primarily to allow me to add a relevant Ordonnance flag and to create the figure vaulting the fence. They are of mixed arms so that I can use them with either of my other handgun and crossbow units. From existing ducal documents of proposed army deployments, its not clear whether these arms were combined as units of shot or separated out by their arms (i.e. all crossbowmen together) which of course suits modern wargame rules more conveniently. Whilst archers are specified, the only specific reference I'm aware of is for the battle order issued at Neuss in 1475 for a unit of 200 handgunners from the duke's territory of Guelders (who were allocated in a contingent alongside archers - presumably longbowmen). 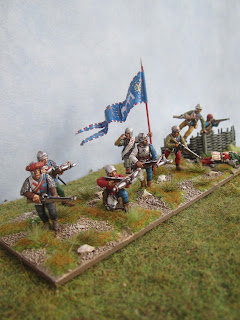 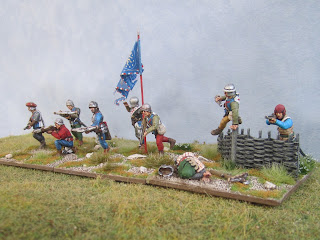 The guidon is based on Swiss booty, captured at Grandson and taken to Solothurn. It was documented and illustrated in an inventory of 1640, along with many other captured flags, and and represents a crossbow unit - as it displays bows and quarrels - raised in Franche Comte region of Burgundy. The flag bearer is a straightforward adaptation of a Perry bowman, with the arm realigned to represent him barking out orders. I've added a bend to denote his service to the duke, taking the design from one seen in photos of 'The Companyne of St George' reenactment group (the bend also usefully reduces the number of rivets I need to paint on the brigandine!). On the same base, the handgunner has had a simple cut and reposition of the knee on one of his legs to create more movement - his stance now being similar to a modern rifle armed soldier advancing. 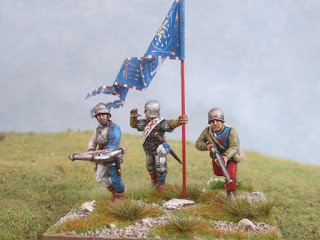 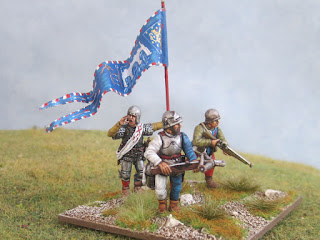 Think it'll back to more mounted figures next...