My thoughts are turning to planning the build of a Swiss Confederation army, to oppose my Burgundians. My primary visual sources for getting a contemporary 'look and feel' are the illustrated chronicles complied during and just after the wars by the cities of Berne and Zurich - to record their civic history, defiance against Charles the Bold and military victories. 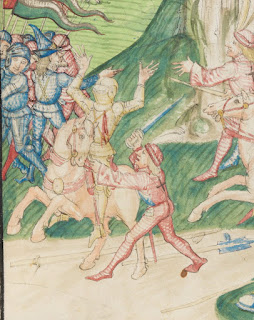 Whereas I used to scour publications to find relatively rare images from these chronicles, several complete volumes are now online and I've started to click through the pages for useful references - of which there are plenty. One of these showed an image of a rather panicked Burgundian man at arms being attacked by a Swiss halbardier (Berne Amitliche Chronicle, volume 3 folio 727). So I thought I'd start off my Swiss additions with a version of this. 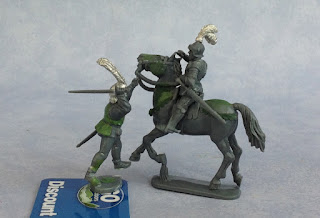 The horse and rider are from Perry's mounted men at arms, the only major change was to use a horse head from their ACW cavalry box, to provide a bit more movement as it's reins are grabbed by the assailant. The Swiss soldier is a plastic body from WotR box with arms selected from the Agincourt French Infantry sprue and a Swiss metal head. The joins have been covered with green stuff, to represent a coat, rather than the livery vest that's designed on the plastic body (which the Swiss don't appear to have worn), although I've not added a breastplate which the image seems to show. Like the illustration, a discarded lance and halbard will lie on the ground. 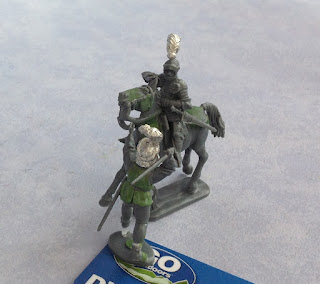 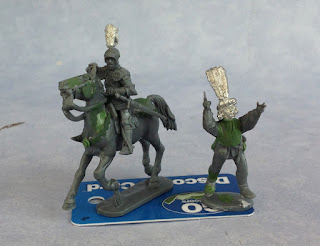 Now on to the painting stage.
Posted by painterman at 03:15