A little Tudor outing to BLAM.

At the weekend some of my figures had another outing from their cabinets; contributing to a game at BLAM (British Lead Adventurer Miniatures) forum's gaming weekend, in deepest Surbiton.
Its a really well organised long weekend, with five different  2-hour participation games put on each day (on 6 x 4 Tables) and a bigger bash on the Sunday.

Stuart Mulligan took along selected units of his Tudors and French, with my terrain and a limbered bombard vignette I made, to play a Last Apostle scenario, in which Tudor forces have to rescue their artillery piece after its marooned in a deep stream. This was based on actual events from Henry VIII's 1513 campaign in France. 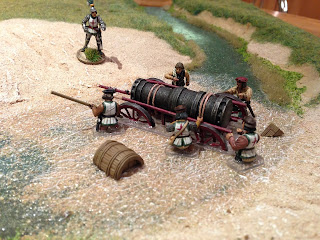 All good fun - rules were Lion Rampant - which work well for a quick skirmish type game for later medievals, One game was drawn and the other a clear French win. It was great to meet new folk and catch up with 'older' ones too (they'll know what I mean!). Many thanks to Giles for his organisation of the event and welcoming for us occasional players.

All the photos, a report on BLAM and some interesting historical context and on Stuart's very fine blog, so please click over for a great read.