Swiss pikes (and a bear) for Partizan show.

I have been occupied for last few weeks with trying to get as many Swiss figures completed as I can for the demo game at Partizan this Sunday (6th September) at Kelham Hall. This means painting some additional command bases using Perry figures, and adding and basing up older Swiss figures that I never got around to completing until there was a need. These are the largely the Wargames Foundry models. 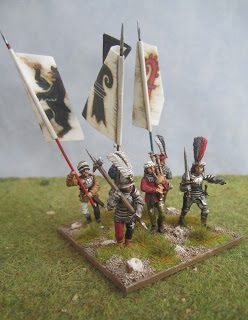 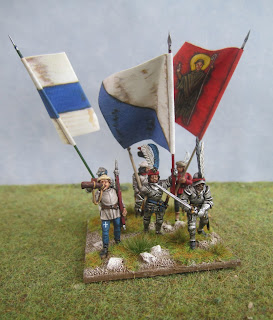 I have completed a Swiss pike bloc – so I now have two of similar size - these use most of the Perry pikes that I painted last year, as a rear row which just needed basing up to match the existing ones. The command figures represent the cantons of Zurich, Zug & Glarus, and Basle & Appenzel (who appear to have provided the bulk of the Swiss nachhut at the battle of Morat). All flags are by Pete’s Flags – these are ones printed on cloth. Some of the command figures have had minor conversions – some
added plumes, a beard for the captain and a headswop or two. 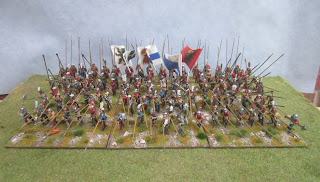 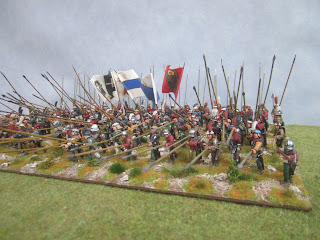 I have also completed the bear of Berne – a recent Perry Miniatures vignette. Bears are recorded to have been kept in Berne from around 1513 and the bear pits still exist as a tourist site (although the bears can now access terraced enclosures along the river side). There is evidence that selected bears were taken on campaign by the army, as a symbol of the city’s power and wealth. One of Schilling’s illustrations of the Burgundian wars shows a bear attacking one of Charles’ troops at the battle of Morat, whether this is literal or another image of Bernese dominance is unclear.

I’ve painted this one as per the bear on the cantonal flag, although most European bears of the time seem to have been brown (and probably slightly smaller than this model). I’m not sure if the accompanying soldier with the two-handed sword is there to fight Burgundians, or stick it into the bear should it not understand who it’s supposed to be attacking! 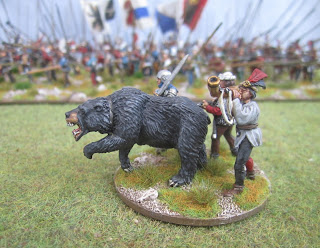 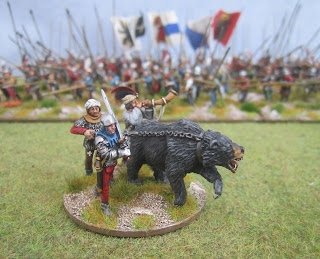 There are a few more Swiss halbardiers being based at the moment. With the figures provided by Dave Andrews and David Imrie, I hoping that the game should be both fun to play and visually appealing. I will post some pictures here next week – but if you do get to the show, please say hi.
Posted by painterman at 10:35