So after a few years spent collecting, painting and basing my Burgundian army, in its current nearly-completed state, it had its first engagement on a wargames table last weekend. 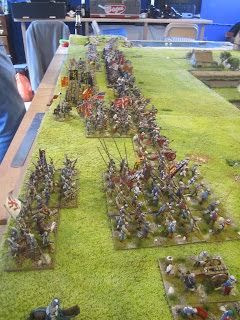 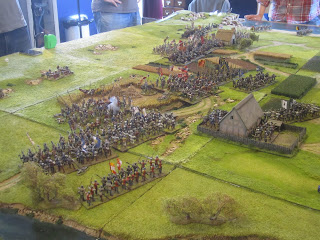 Whilst it would have been prudent to ‘blood’ a new army in a modest affair, my Ordonnance army was invited to join forces with that of Dave Andrews (of Great War Miniatures), on the wargames table of Alan and Michael Perry. Dave’s army, which uses the Foundry late mediaeval range, has been featured in several wargames publications over the years and had waited even longer than mine to be used in action. 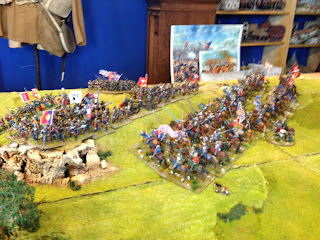 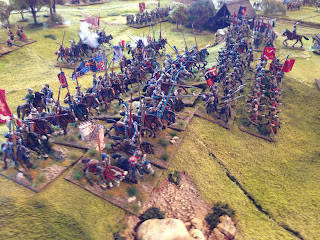 The scenario was a hypothetical one – based on a Lancastrian English chevauchee into the Lowlands, where a Burgundian army quickly set about bringing them to battle. It was a large game featuring over 1,000 figures, a 14 foot long table and 8 players. It created a wonderful sight and a close game. I led the Burgundian right wing, of men at arms and supporting missile troops, which did its job of attacking the English wing of bills and bows, who were defending a low hill. The mounted advance was somewhat slower than planned/hoped for and they made particular heavy weather of getting up a modest hill to finally charge in to combat, with the expected result of pushing back the English. Elsewhere it was a mixed bag from the ‘home team’ and after 5 hours of play, an English victory was declared. So at least both Burgundian armies played to their historical form…and lost! 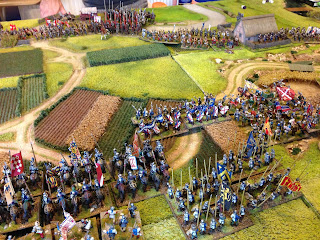 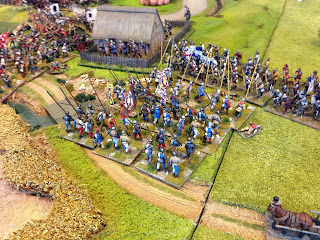 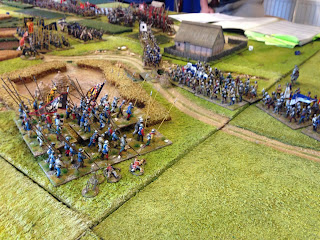 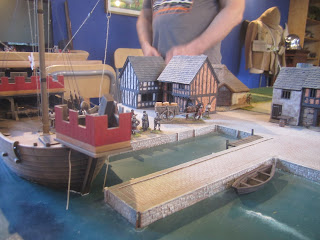 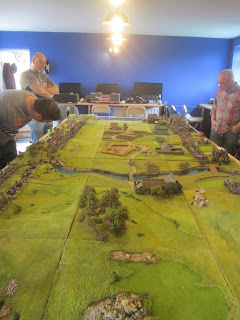 And so with that defeat under my belt, the duke’s army is now booked for another engagement – at short notice, but of more traditional gaming proportions. This will be at Partizan wargames show in Newark (UK) on Sunday 6 September.

This will be a Swiss-Burgundian affair, which we’re proposing to call “Berne Baby, Berne”, using figures from myself, David Imrie and Dave Andrews (…this time his growing Swiss army!). The actual scenario will get sorted on the day when all the players have an opportunity to discuss and agree. It should be fun. Please do say hello if you can get along – if you can’t then I will post some pictures here afterwards 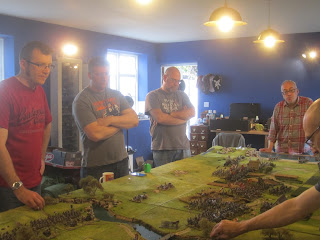 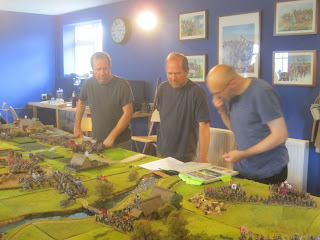