After the very enjoyable distractions of the Cravant game at Salute, I'm now turning my focus and bulk of my time to continuing with the Burgundian Ordonnance army (along with the Swiss Confederation). There is plenty to do; somethings already started (men at arms, coustillers, handgunners) need to be completed and new plans are being formed - either in my head or jotted down on bits of paper somewhere. 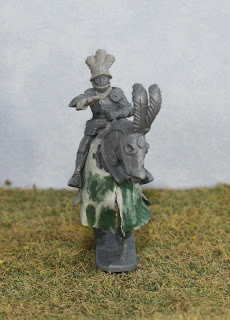 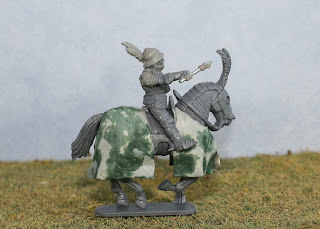 To get back the momentum, here's work in progress on a Charles the Bold commander figure. I wanted something special and if possible unique to represent the duke himself. This wonderful figure has been created for me by Oliver of Steel Fist Miniatures, a couple of months ago. The model is a conversion of a Perrys plastic man at arms in 'german armour' - with addition of a new kettlehat, bevor, Order of the Golden Fleece chain and arm holding an ornate baton decorated with a fleur-de-lys. Oliver's done a fantastic job of converting my outline requirements into a great looking figure, in a typical commander pose. Will add a mace or axe hanging from the saddle I think. 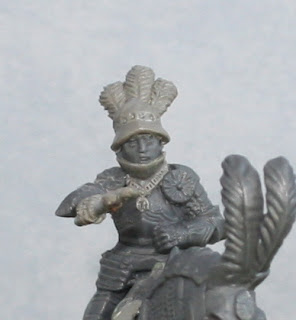 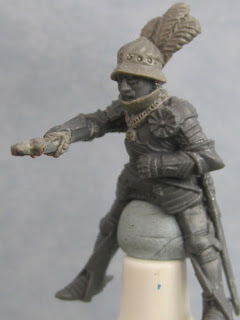 The horse is a conversion of mine, as I wanted to have Charles riding a mount with cloth caparison bearing the arms of Burgundy. I've used a plastic horse with the barding added on. The cloth covering over the bard has been made by a trial and error process of cutting, adjusting and finally glueing on  four thin aluminium sheets -  on both sides, front and back. These have been covered with a fine layer of ProCreate putty; with any gaps filled with some GW Liquid Green Stuff - hence the current two-tone appearance (it needs a smoothing down with some fine sanding sticks before undercoating).  I think it's just about convincing enough - I need to keep the surface relatively flat to assist with painting the heraldry on each area. 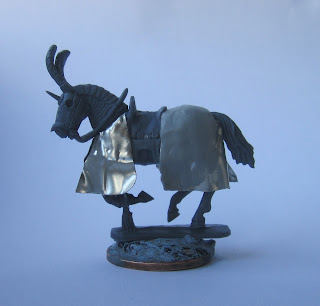 Plan is to paint the duke's harness as a gilded finish, as well as the horse bard where it can be seen. Not yet sure what combination of paints I'm going to use to achieve a nice gilded armour finish. Hopefully I'll end up with a figure that'll stand out on the wargames table and should produce an appealing contrast with the duke's harness and the Burgundian arms on the horse caparison. The figure will be a little different from the well-known Schilling Berne Chronicle illustration (below), which shows barding with painted or embroidered decoration, but I'm saving that treatment for other figures. 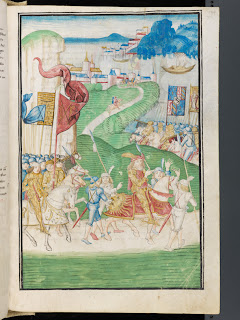