The Bear of Berne 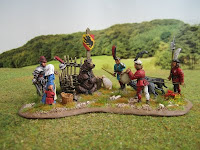 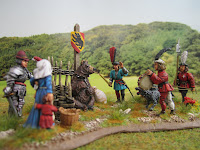 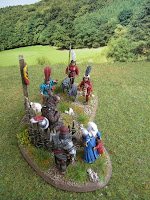 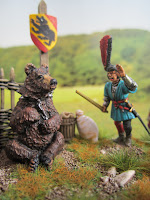 I really should be getting on with the 'rank and file' of my Burgundian armies, but I've had this vignette in mind for some time now and so wanted to get it 'out my system' and to restart the blog with a more substantial piece.

The city of Berne has been associated with bears from the middle ages. The name Berne itself derives from the german for bear and it appears that the city's arms have carried a bear on them since around 1224. Bears have been kept in the city from 1441; the famous bear pits were built in 1513 and only closed as recently as 2009.

My scene imagines the Bernese contingent taking one of their bears on campaign. I have no historical reference for this occuring and it's probably highly unlikely as it would have been a very risky endeavour, both to the troops, local inhabitants and to the bear itself. The Swiss Chronicles of Berne show several illustrations of bears but all are mostly hunting scenes, as the european brown bear was still native to the Alpine slopes in the fifteenth century. One of my favourite illustrations from the chronicles is the anthropomorphism of the Berne city guard (shown below) preparing for duty, with the bears sporting ostrich plumed turbans and armed with halbards and handguns.
So here we have our very reluctant large bear, being cajouled and encouraged to move by his handlers from the temporary part-enclosure. The bear is a very old Citadel one from the 'Dwarf King's Court' boxset of the 1980s vintage, which has probably now had his third repaint. The handlers are all Perry European Armies range; the handler is a plastic with metal Swiss head - his sword cut down to a wooden stick. The musician and dog handler are metals, the former with the plastic arms holding the tambor from the 'Mercenaries' box added. The dogs should really be hounds, according to medieval illustrations, but have had to be irish wolfhound types, as I couldn't find any to fit in. The woman looking on and holding her apprehensive children is a Foundry model.

Perhaps Michael Perry will give us his own version of a Berne command group at some point (with or without a bear)? 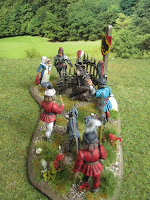 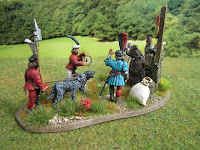