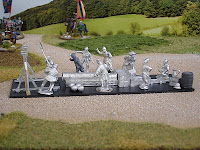 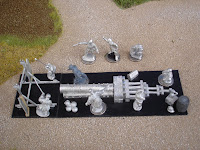 Whilst I should be concentrating all my efforts and limited time to my HYW project, I keep reopening the box lid of the last Perry WotR metal pack, the bombard, and thinking about how I can use it. Spurred on by Phil Hendry's lovely rendition too, http://web.me.com/philhendry/Phil_Wargaming_Website/my_blog/bombard.html I've decided on how I'll base it up to make it usable for both my Burgundian Ordonnance (at Morat for example) and with my HYW.
The pic shows current state of play, having cleaned off all the flash etc. I've decided on the mantlet being based seperately, so it can be an optional piece. I've added some wooden pallisade to both sides to fill any gaps, so that it can be aligned with other parts of planned wooden siege lines.
The gun crew will have 3 'sabot' bases, to allow me to switch key personnel for folk in earlier fifteenth century garb (shown here to one side), all based on 5 pence coins. For the Burgundian version I've replaced the guy holding his hand to his ear provided in the pack (who looks most useful as an injured figure who's taken a blow to the head, to me) for a Perry plastic shouting instructions.
I've also left out one of the wooden bracings, partly to reduce the overall length and to save it to do the same job with another bombard casting I have. There'll also be other sige equipment - bucket, barrel, boxes, ramrod, spare cut wood, swords, etc - placed on the finished base.