What I like best in viewing other people's blogs are painted figures. On this blog such postings are the ones which usually get the most interest and the comments - which are always gratefully received. So I apologise in advance that there are now finished models this time.  Life's has been a tad busy with my youngest daughter starting her University life and my eldest about to return for her final year. However painting has progressed on the barded horses, which I'll show when they have their mounts. 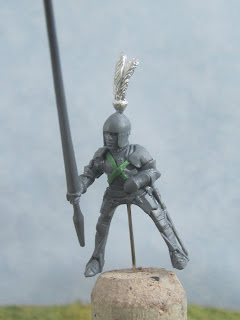 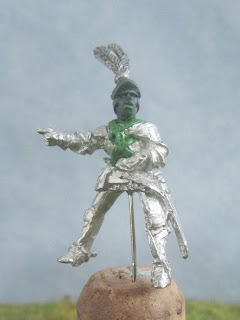 In the meantime here are the men at arms for the Duke's contingent, at the ready-to-undercoat stage. Doing the modest enhancements to these figures takes me longer than the painting stage will on 'white armoured' figures! All have plumes and saltires added, as I'm doing for all the Burgundian Ordonnance men at arms; those on the ACW horse frames have had saddles made from putty on the back of the figure too. I selected helmets which were not closed faced or with raised visors, as this unit will be posed in readiness rather than in the midst of any action. 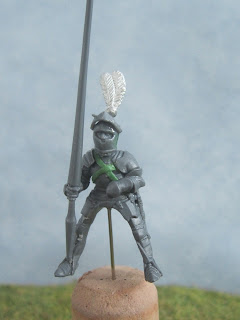 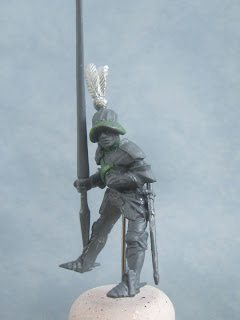 The man at arms pointing is a metal with a headswop and his golden fleece pendant and chain built up from green stuff. I hope that the face wont look so crude when it's painted - sadly the Perrys men at arms sprue has a number of heads which are positioned with the moulding joint down the middle of the face - creating an inevitable ridge which is very difficult to entirely remove and I had to try and rebuild the bottom lip (...plastic surgeon for 28mm I am not!).  I really do hope that this doesn't get repeated on future sprues and that all heads laid out sideways on the sprue. 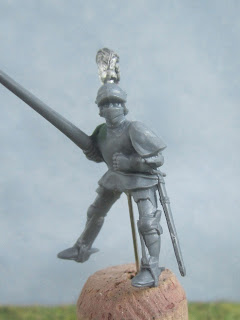 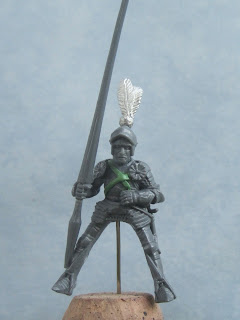 Shouldn't be too long before we're back with some finished stuff...