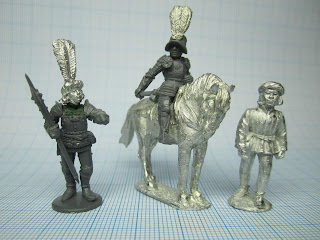 I've utilised my first plastic from the new Perry Mounted Men at Arms box. These figures will form a small vignette of one of the Swiss captains from the Burgundian wars, discussing tactics to counter the ducal forces.

I've taken a 'german' harness rider  with a 'chapel de fer' from the Mercenaries bow, to which I've added some ostrich plumes that are  so distinctive of Swiss headgear in all the illustrated chronicles of the period. His companion, in an obligatory pointing pose, has parts from the Bills & Bows box with a metal Swiss head - which annoyingly are a rather poor fit and always require pinning and filling of the remaining gap under the neck. A plastic sallet from the new boxset has been attached to hang from his belt at the back. The third figure will carry the captain's personal flag.

The plastic riders seem to fit on the already released Perry horses from the WR range really well. I reverted to a metal horse as all the options in the new MAA box create horses trotting or galloping. The only work required was for the back of the saddle - whilst the metal riders have cast-on saddle supports, the plastics have the saddle sculpted on to the horses. So a small piece of plasticard was cut to shape, glued in place and given a wash of diluted GW Green Stuff.

I'll post up the completed group when painted.
Posted by painterman at 05:52