Two fingers (and some more)... 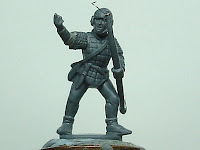 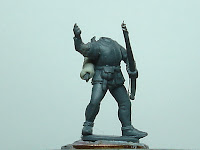 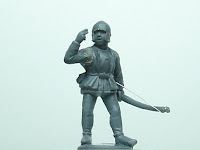 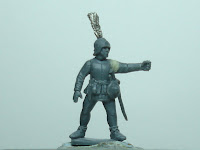 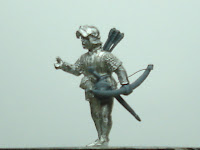 I'm about to re-start my Burgundians and in anticipation of the release of the new Perry 'Mercenaries' plastic box, which will provide the bulk of the Ordonnance troops, I've been starting to prepare some more longbowmen.
It maybe that the Perrys are planning to design some metal longbowmen (I'm certainly hoping so) which may include one or two giving the 'two fingered' gesture, but I thought I'd have a go myself anyway. Now it may just be a historical urban-myth that the origin of this abusive gesture came from English & Welsh bowmen, demonstarting that they still retained their bow-pulling fingers. However, whatever the actual origination is, there appears to be a Schilling Chronicle illustration showing it occuring at a siege - pictured above - and that's good enough excuse for me.

So I've turned the clock back to my younger years of chopping up Airfix and Historex plastics and done a simple repositioning of arms, with a bit of filling with ProCreate putty, to produce some English bowmen in Burgundian service. Another bowmen's arm has simply been drilled to hold the company flag. I've also changed an artillery gunner into a bowman and re-employ another gunner as a handgunner, when I see the actual 'Mercenary' sprues. The chronicle picture also shows distinctive large arrow bags used and so perhaps I'll have a bash with the putty to make some of these too?

The longer I sit looking at these figures the more conversion options and seem to arise.