Earl of Devon at Tewkesbury 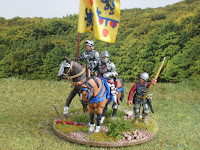 John Courtenay, 15th Earl of Devon, surveying the field at Tewkesbury on 4th May 1471, the day he would die fighting for the Lancastrian cause. The earl was the younger brother of the earl who'd been attainted and beheaded following the battle of Towton. He was restored to the earldom by Warwick in 1470 when 'the kingmaker' was effectively controlling the Henrician government. He led the Lancastrian left wing at Tewkesbury, opposite Lord Hastings, and died in the fighting.
The figures are Perry WotR; Devon has 'turncoated' from the Yorkist command pack (WR3) and the sculpted soft hat replaced by a visored sallet from the plastics box, to position him as being closer to the front line and ready for the fray - although of course it's most likley that he would have led his men on foot when the battle started. His coat of arms is from one of the new WotR flag sheets from LBMS.
This vignette was done over the last two days and is a welcome diversion from the rank and file I'm doing. Devon will be available for closer inspection at the Perry's Tewkesbury demo game at this year's Salute.
Posted by painterman at 09:17