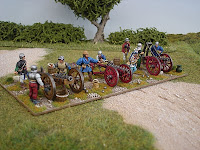 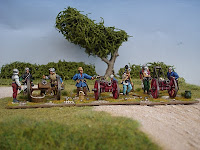 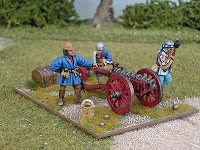 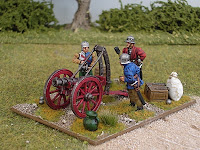 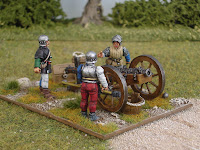 Charles the Bold was reknowned for the funds he lavished on acquiring a substantial artillery train, both the very latest field and siege guns, employing master gunners from across Europe . Although partly an outward reflection of wealth and status, Charles did employ his artillery in both battles and seiges (such as Neuss and Morat), although without success - by 1477 most of his artillery appears to have been in the hands of various Swiss cantons. Wheeled field guns such as these had a wide range of names used by contemporary accounts; such as coulourine, crappaudeaul, veuglaire and serpentine. Neither their overall size or calibre appear to have borne any relation to any categorisation derived from their naming, although they were all breach loading.
These are the first of what will be a sizeable artillery train for my Burgundians. They are Perry WotR crew, with the addition of a converted plastic figure. Given the narrowness of my basing (60mm) I decided on crews comprising of just a master gunner and two assistants. Equipment is a mix of Front Rank, Bicorne and Foundry. Two of the guns are the Perry pieces, which are very fine castings that require careful cleaning and patient assembly.
The slightly larger gun is another nicely sculpted model which I believe has something of a rarity value as its from a now defunct, incomplete range of late medievals from about ten years ago... so can anyone try and identify the 'mysterie gonne' ?
No prizes, but I'll reveal the answer on my next posting...
Posted by painterman at 10:34