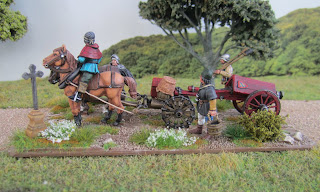 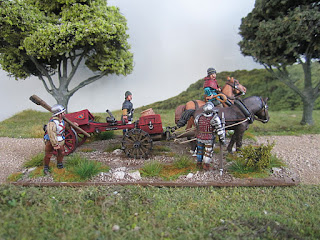 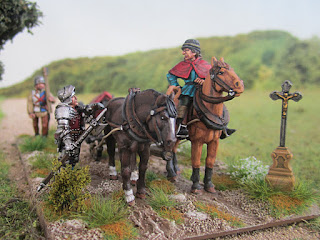 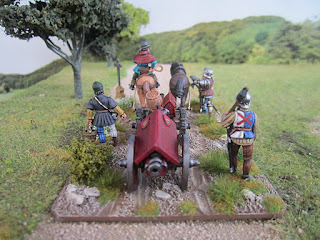 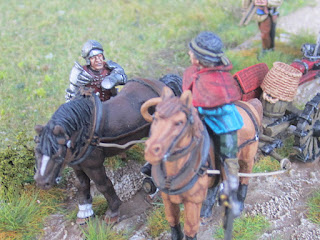 The completed limber,with accompanying crew, discussing the best route towards their new destination. As previously blogged in the WIP on this, I've taken a slightly anachronistic approach to creating a late fifteenth century limber for a typical field piece - a crappaudeau or veuglaire as contemporary Burgundian accounts refer to them as.
The horse team are from the new Perry Wars of the Roses baggage wagon packs and the limber is a converted ECW piece with box and barrel added for storage. The crew are Perrys with slight alterations. It ended up being put on a slightly wider base than planned, to accommodate the figure of the man at arms issuing instructions, so theres a bit of hedgrow added to fill in the spaces. The roadside cross is from a set made for model railways.
I'm happy with the final composition. I also managed to re-use the chamber that I'd removed from the gunner's hand, it's hanging from the elevating mechanism (which I had to replace with a plasticard one as the casting is too fine and broke) as I'd seen done by the Company of St George re-enactors last summer. After all this work I've put in, no doubt the Perrys will probably bring out their own casting next month!
I'm now considering doing a larger bombard in transit using one of the Perry wagons, attempting to re-create an image in one of the Bern illustrated chronicles that I've found.
Posted by painterman at 07:37