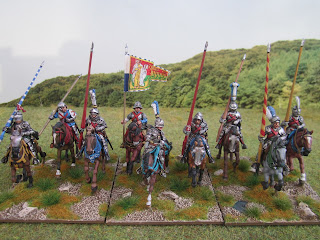 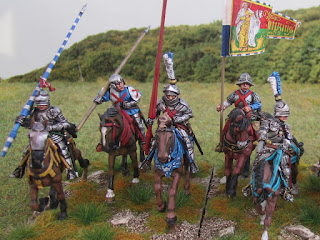 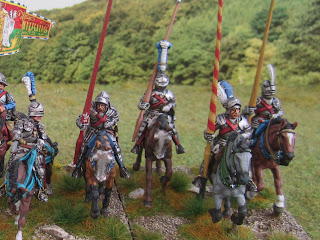 I've finally completed my second mounted men at arms for my Burgundians. They've been slow going - from the prep and enhancements done to some of the horses (see previous posts), the addition of cross of St Andrews to the riders' harness, to the final painting (which the horses seems to be a longer process than the men, as the plate armour is largely a wash and dry brushing) - although other pieces have got picked up and completed during that time.

The only metal figures are the Company's captain (the converted Perry Joan figure from their HYW range) and the pennon bearer. The remainder are plastics, largely from the box except for the addition of the St Andrew crosses made from Procreate - another slow process as one 'arm' has to be done and left to fully harden before the other is added. I now start to appreciate how long the process must be to sculpt a full figure from start to finish. Some have had metal plumes attached.

The pennon is of the 15th Ordonnance company, showing St Peter holding the keys to heaven. This company was formed in 1473 by ducal decree and was present at the siege of Neuss in 1475 and at the battle of Nancy two years later, at which time the conductuer was Phillipe de Loyette. 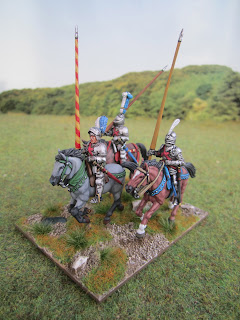 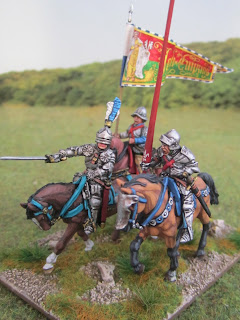 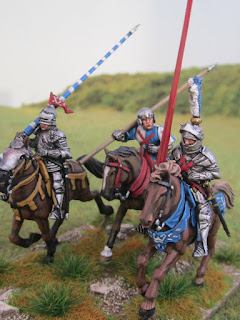 I think that the next men at arms will be in more aggressive poses, to compliment the movement of the horses. 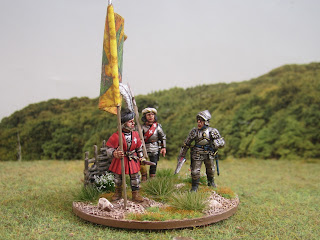 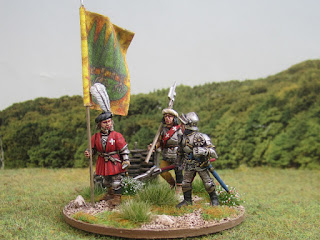 This is Hans Waldmann, a leader of the Zurich contingents who was at the battles of Morat and Nancy.  He originated from Zug canton and through marriage he appears to have risen through the social ranks within the city of Zurich by the time of the Swiss-Burgundian wars. His successful leadership on the battlefield enhanced his political career and he was elected mayor of Zurich in 1483. However he was to be deposed some years later, following his attempts to raise tax rates on local villages that led to an armed peasant uprising against him. He was subsequently tried, found guilty of corruption and executed in 1489 – as depicted in the Luzern Chronicle of 1515 (below). 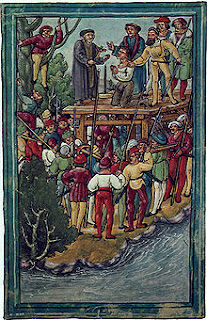 These are all plastic figures from the Mercenaries box.  Waldmann has a sallet from the mounted men at arms sprue, as is his right arm – with metal halbard attached. His flagbearer also uses an arm from the same box, with the gauntlet replaced with a bare open hand from a longbowman’s arm (...oh the joy of these plastics!) and a metal Swiss head. His style of beard is shown in the Schilling Chronicles for some of the city elders and I’m quite pleased (and somewhat surprised) by my addition using Procreate, to try and represent a man of some status being entrusted with Waldmann’s personal arms. The accompanying halberdier is another plastic and metal head combo; the only addition being his bend – a fairly common method of identification in the later fifteenth century and again shown in the Swiss chronicles. The section of wattle fence is Renedra, cut down and bent to shape. The flag is another one from Pete’s Flags sheet of Swiss commanders (see the previous entry for a link to purchase from ebay). 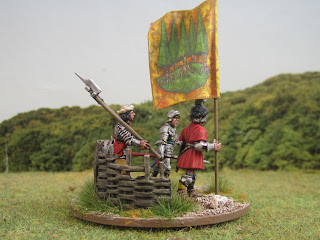 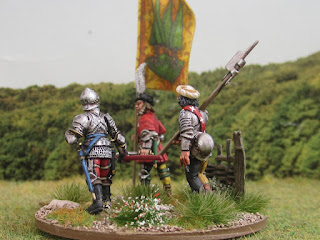 Now, time to get back to those Burgundian men at arms that have been on the painting table for far too long… 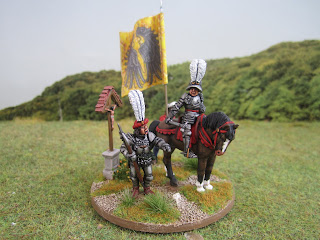 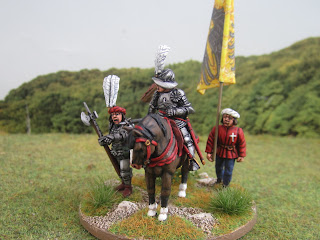 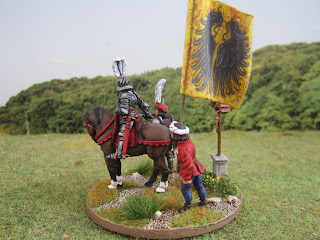 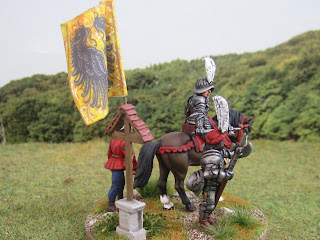