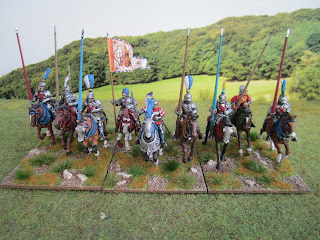 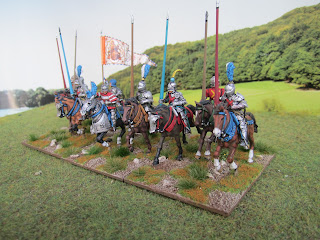 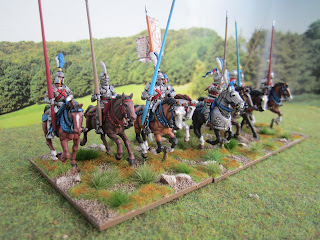 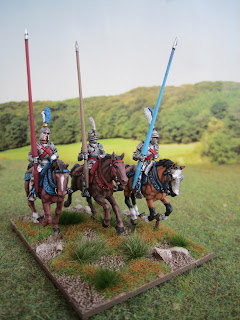 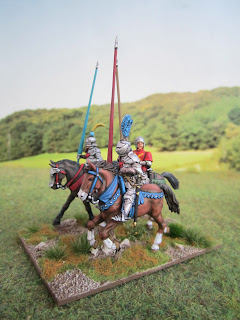 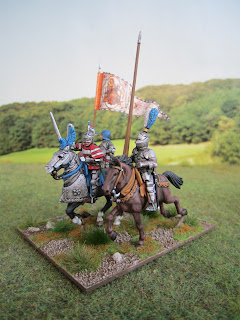 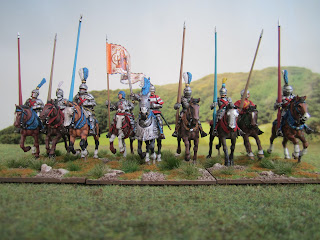 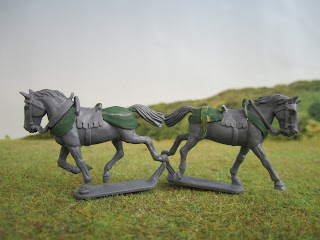 Just an quick interim post, as I slowly continue to paint my first Ordonnance Men at Arms contingent.

I wanted to create a little variety with the horses's tack, as most of this unit will be unarmoured mounts and the consequence of interchangable horse halves in the Perry mounted men at arms box is that the tack is all the same (very similar to the horses illustrated in the 'Beauchamp Pageant'). One of the benefits of plastic is that such changes are relatively easy to attempt. I have therefore scraped away with a sharp scalpel the existing retaining straps on the horses rump and smoothed down the other tack on the flanks. I then cut to shape some replacement tack out of thin foil (from puree tubes that I've saved), loosely based on some medieval illustrations. These have then had a covering of GW Green Stuff brushed on in order to give them a bit of texture before undercoating and painting.
Posted by painterman at 15:05 2 comments:

Burgundian Men at Arms - first base. 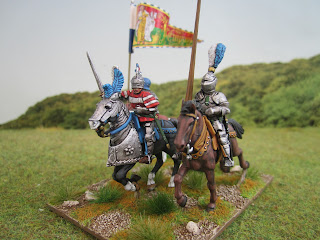 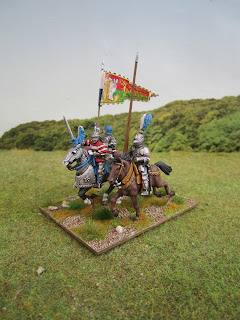 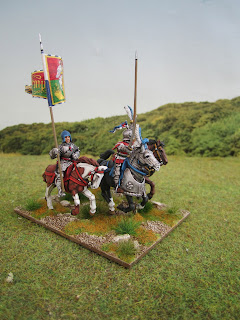 I've completed the first base of Burgundian Ordonnance men at arms. I was eager to get some of these done, as the figures are so good. This is the central base (on 60mm width by 80mm depth) of a three-based unit that'll comprise my Ordonnance mounted men at arms; so nine figures in total for each contingent. The central base will have the company guidon and any conductuer/captain figure, with the wings having men at arms plus any supporting coustillers - so effectively all the bases will be interchangeable.  I'll provide some historical context for this Ordonnance  Company when it's completed.

A note on painting the plate armour.  As previously posted the extra fine details on the figures encouraged me to try a different approach. On these figures I've undercoated on black (as usual), then given the armour a thin covering of the new Games Workshop 'Runefang Steel'. This is quite a bright colour and needs toning down, so I when dry I generously washed with a 50:50 mix of GW black wash and Ogryn Flesh wash, letting it pick out and settle in all the joints of the plates. When completely dry, a very light dry brush on the high points of the armour with Vallejo Silver. I did try the GW new dry-brush, but they are a rubbery consistency which I don't like using (and the colours not bright enough to act as the final highlight). I'm happy with the result and I'll use it on the rest of the men at arms - it's quick and easy (the horses now take the longest to paint) and gives me finish that I wanted to represent  polished plate harness.

Being too hasty in my enthusiasm to assemble - and not heeding my own advice of my last post! - I realised when it was too late that I'd attached the wrong lance arm to the man in the italian armour. Hey ho... hopefully when I've done several contingents of these, he'll be too hard to find...

Riders are already assembled (correctly!) and undercoated for the remainder of this Company. Will post them all soon. 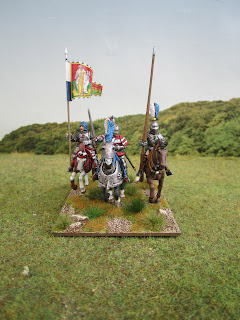 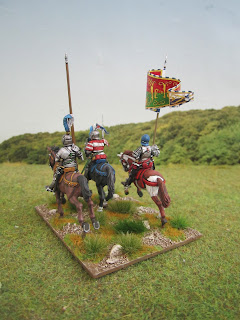